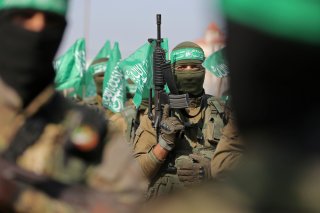 The balloons near an Israeli playground in February should have been a welcome sight. Instead, they were carrying bombs intended to kill, maim, and terrify. Panicked teachers hurried their students inside.

The explosives were part of a Palestinian campaign to attack Israeli population centers with bombs and incendiary devices that float to their targets with the aid of balloons, inflated latex gloves, and even condoms. One group responsible for such attacks is Humat al Aqsa (HAA), or the Defenders of al Aqsa. This small but violent organization is a proxy of the Hamas terrorist group, which itself is a proxy of the Islamic Republic of Iran. HAA is not yet sanctioned by the U.S. government, but it should be.

Humat al Aqsa was reportedly founded in April 2006. According to Israel’s Shin Bet security agency, Fathi Hamad, a senior Hamas official who is subject to U.S. sanctions, established and funded the group. HAA has identified Muhammad Naji, also known as “Abu Naji,” as its secretary-general.

By employing HAA as a proxy, Hamas can carry out terrorist attacks while maintaining plausible deniability. Hamas seeks deniability because it has sought to rebrand itself as a pragmatic, moderate force despite its oppressive rule in the Gaza Strip and its commitment to destroying Israel. HAA lets Hamas pursue its genocidal aspirations without being held to account.

No one should be fooled by Hamas’ ruse, however. HAA’s most famous terrorist attack demonstrated the close ties it enjoys with Hamas. In 2008, HAA attacked the convoy of Israeli Minister of Internal Security Avi Dichter. Ahmed Jabari, then-commander of the Qassam Brigades, Hamas’ military arm, advised HAA on this attack. Though Dichter escaped unscathed, HAA and the Qassam Brigades published videos glorifying the assault.

HAA’s depredations didn’t stop there. The group has repeatedly threatened Israelis with violence and carried out numerous attacks. HAA also disseminated several videos of its fighters prepping and launching rockets and mortars against Israel. In one video, a fighter in a ghillie suit aims his .50 caliber sniper rifle at Israeli soldiers. In May 2019, HAA published martyrdom posters for Imad Muhammad Nasir, who was killed by the Israel Defense Forces in the northern Gaza strip as he was firing mortars at Israel. And in January 2020, HAA posted a banner of thirteen “martyred” fighters on its social media.

As disturbing as the videos are, the clips are even more sinister because HAA is operating out of civilian areas. This effectively turns nearby Palestinians into human shields. The use of human shields is a war crime and is sanctionable pursuant to the Sanctioning the Use of Civilians as Defenseless Shields Act of 2018.

Part of HAA’s novelty is its brazenness; it is the only Palestinian group known to have used its emblem on a video taking credit for launching explosive balloons at Israel. In a February 2020 video, men hold a banner with the HAA logo and name, fill condoms with helium, and then send them toward Israel. These unconventional infiltrating weapons, or Trojan horses, have scorched forests, caused millions of dollars in damage, and terrorized the population of southern Israel.

Furthermore, HAA is thoroughly enmeshed among Gaza’s terrorist groups. In January 2020, the group posted a photo of its members meeting with the representatives of other terrorist organizations, including Khaled al Batsh, a senior member of Palestinian Islamic Jihad. In February, HAA’s leadership participated in an event marking the fifty-first anniversary of the Democratic Front for the Liberation of Palestine terrorist group. HAA has also stated that it is a member of the Joint Operations Room, a grouping of militant factions in Gaza that operates as a quasi-army.

HAA doesn’t only threaten America’s ally Israel, it threatens the United States and its interests. Many American expatriates live near the Gaza border. In November 2019, a Washington, DC-based law firm filed a lawsuit on behalf of American citizens harmed by rockets, mortars and incendiary devices launched from Gaza. And American vessels often dock at the port of Ashdod, less than twenty miles from the border with Gaza.

HAA is committed to Israel’s destruction, as demonstrated by its Quranic motto: “And kill them wherever you catch them, and drive them out from where they drove you out,” a reference to Jewish Israelis. In keeping with the U.S. government’s leadership and commitment to designating violent groups that perpetrate terrorism against civilian populations, and in light of the overwhelming evidence of its terrorist activities, the U.S. government should sanction HAA.

David May is a research analyst and contributor to the Foundation for Defense of Democracies’ (FDD) Center on Military and Political Power (CMPP).

Joe Truzman is an analyst and contributor at the Long War Journal (LWJ), a project of FDD. For more analysis from David, Joe, CMPP and LWJ,, please subscribe HERE. Follow Joe and David on Twitter @DavidSamuelMay and @Jtruzmah. Follow FDD on Twitter @FDD and @FDD_CMPP and @LongWarJournal. FDD is a Washington, DC-based, nonpartisan research institute focusing on national security and foreign policy.