Is Trump Really Pulling Out of Syria? 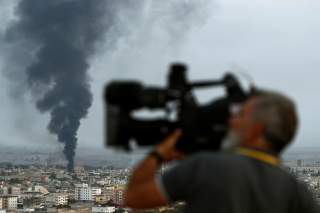 Congress and presidential candidates are debating over President Donald Trump’s decision to withdraw U.S. troops from northern Syria, allowing Turkey to battle the Syrian Kurds. But it’s not clear the United States is really leaving Syria after all, even though its has outsourced control over former ISIS territories to Turkey.

Lawmakers voted 354–60 to condemn the withdrawal less than twenty-four hours after Democratic candidates clashed over the blame for the bloodshed in Syria during Tuesday night’s presidential debate. Trump touted his decision to pull U.S. forces out of the Middle Eastern country last week and during a press conference today bragged about how the decision was “strategically brilliant.”

“To focus singularly on what’s taking place in a part of Syria neglects the true risk to the American people and how effective this administration has been at preventing that risk from impacting security for the American people,” Secretary of State Mike Pompeo said in an October 16 interview on Fox Business. Pompeo made clear that Iran was his focus of concern and not the Kurdish forces who had helped defeat ISIS.

It appears that the Trump administration never intended to leave Syria altogether. Instead, U.S. policy was to pivot towards a counter-Russia, counter-Iran campaign—at the expense of the Kurds.

Even after Trump announced that U.S. troops were leaving the area, about one thousand U.S. troops embedded with the Kurds continued to hold the line against Russia—until they were forced out. And the U.S. garrison at al-Tanf, on the opposite side of Syria, won’t be stopping its counter-Iran mission any time soon.

After less than a week of fighting Turkey, the Kurdish-led Syrian Democratic Forces (SDF) announced a deal with Russia and Syrian leader Bashar al-Assad to cooperate against the Turkish invasion. But a leaked phone call with Gen. Mazloum “Kobani” Abdi shows that the United States was working to prevent the deal.

“You will not protect us and you won’t let anyone else protect us,” the Kurdish high commander told U.S. Deputy Special Envoy William Roebuck. “Either you stop this bombing on our people now, or move aside so we can let in the Russians.”

SDF diplomat Bassam Ishak confirmed the authenticity of the quote to the National Interest, but his superior Sinam Mohamad claimed that “no one discourage[d]” the SDF from seeking outside help.

“Our team has worked closely with the Syrian Democratic Forces, but we will not comment on a purported internal document,” a State Department official told the National Interest. “Our focus is to find a negotiated solution to dissuade Turkey from further action and to end the suffering this operation has caused for the people of northeast Syria.”

Its patience with the Trump administration wearing thin, the SDF announced its deal on October 14. According to an Arabic-language statement by Kurdish official Aldar Xelîl, the deal is a military memorandum of understanding, and will not impact the Kurdish-led Autonomous Administration. “The memorandum of understanding with Damascus is a step for achieving a final deal in the future,” he said.

“The forces of the international coalition believe that we have turned the tables on them and on America after the deal with Damascus and Russia,” Xelîl added. “There was a deal between Russia and America related to northern Syria. It is now on them to agree on a new deal.”

Even after the deal was announced, U.S. troops blocked Syrian and Russian troops from crossing between the SDF-held towns of Manbij and Kobane. A collective of local journalists called the Rojava Information Center (RIC) confirmed that U.S. aircraft had buzzed Syrian troops outside Kobani on October 15 as the two forces “jostled for position.”

Erdoğan had reportedly promised not to attack Kobani, which was the scene of the SDF’s most important victory against ISIS in 2015, but Turkish-backed forces assaulted the city anyways.

By the night of October 16, Syrian troops were entering Kobani anyways. At the same time, Russian troops made it to Manbij, taking control of former U.S. bases. Operation Inherent Resolve Spokesman Miles B. Caggins III confirmed that U.S. forces have left Manbij and Raqqa as part of “a deliberate withdrawal from northeast Syria”

The presence of Russian and Syrian forces have allowed the SDF to fight back hard. The RIC claimed that Russian aircraft were preventing any further Turkish airstrikes. Both the RIC and Shino Can, a local NGO worker, confirmed to the National Interest that the SDF was gaining ground in the border town of Ra’s al-Ayn—known as Serekaniye in Kurdish—and had retaken its capital of Ayn Issa with the help of Syrian government forces.

While the United States was ducking out of northeast Syria, it was doubling down on southeast Syria. The White House said in an October 14 statement, “[a] small footprint of United States forces will remain at At Tanf Garrison in southern Syria to continue to disrupt remnants of ISIS.”

“The use of Tanf for counter-ISIS purposes really shifted to a counter-Iran purpose some time in 2016 and was especially accelerated during the early months of the Trump administration,” said explained Nicholas Heras, a Center for a New American Security fellow who has advised U.S. counterterrorism officials. “Since that time, Tanf has really served no counter-ISIS purpose whatsoever.”

Because the base is officially off the books, it is difficult to know exactly how much it costs the American taxpayer. But at least some of the $1.045 billion annual “Counter-[ISIS] Train and Equip” fund has gone to Syrian rebel forces trained at al-Tanf to fight Iran, Russia, and Assad.

“Tanf is a talisman of a desire within some on Trump’s Syria team to use Syria as an effective base to counter Iran,” Heras, who has observed SDF operations in Syria, told the National Interest. “There are few benefits for the U.S. to be present at Tanf, except that it allows the United States to monitor Iran’s so-called land bridge.”

As former State Department official Wael Alzayat said at a Turkish Heritage Organization event on October 16, “the Iranian government and the Qods Force…have their dream of connecting Iran to Lebanon” via Syrian soil. Alzayat is close to Ambassador James Jeffrey, who oversees Syria policy for the Trump administration.

“We have outsourced our foreign policy and national security interests in the region to tribal entities,” Alzayat added, complaining that the SDF represented only a “minority within a minority” of Syrians. “When the U.S. does come in with overwhelming power, the world blames the U.S. as heavy-handed.”

In June 2016, the U.S. military directly came to blows with Russia ove al-Tanf, as U.S. Navy jets chased off Russian fighters from bombing U.S.-backed rebels outside the base. And in May 2017, the U.S.-led coalition bombed Syrian and Iranian forces—which may have included Russian advisors—advancing on al-Tanf.

Still, with only 150 troops stationed at al-Tanf, the American people are unlikely to feel the costs of keeping the base—unless another flareup happens.

“It seems that U.S. officials, desperate to keep a toehold in Syria, look at Tanf as a low-cost, light footprint—and out of Trump’s view—way to keep a U.S. presence in Syria,” Heras concluded.