Is Trump Right to Remove U.S. Troops from Afghanistan? 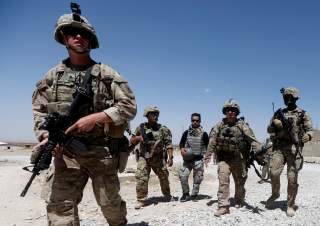 President Donald Trump’s announcement to pull out seven thousand U.S. troops from Afghanistan took both his allies and adversaries by surprise. As expected, Trump ran out of patience due to lack of progress on his South Asia policy announced last year in September and the worsening security situation in Afghanistan. The announcement came in the middle of the U.S.-Taliban talks in the United Arab Emirates (UAE) to find a politically negotiated end to the war. It contributed to a resignation from Defense Secretary James Mattis, the principle architect of Trump’s Afghan policy.

Trump’s announcement will change the calculus on ground in Afghanistan with far-reaching consequences for regional peace and security. Though it remains to be seen if this change is for good or the worst. In any case, it is the beginning of the end of the seventeen-year war in Afghanistan.

Broadly, Trump’s drawdown announcement from Afghanistan has generated two kinds of reactions among the strategic and diplomatic communities.

Some have welcomed the announcement with cautious optimism and view it as part of the ongoing peace confidence building measures (CBMs) between the United States and the Taliban. A credible timeframe of U.S. withdrawal from Afghanistan has been the long-standing demand of the Taliban for a ceasefire agreement. This school of thought believes that troops reduction would bridge the trust-deficit between the United States and the Taliban and incentivize the latter’s participation in future peace talks. Further, it will lessen U.S. troops casualties and expenditures in Afghanistan.

The bulk of U.S. troops, one hundred thousand, left Afghanistan in 2015 and since then the Afghan security forces have been responsible for security maintenance in Afghanistan with training, assistance and advising coming from the NATO-led Resolute Support Mission (RSM). If the withdrawal of one hundred thousand troops did not lead to a civil war in Afghanistan, then reducing the fourteen thousand U.S. troops by half will not change the situation dramatically, particularly when the Taliban are engaged in peace diplomacy with the United States. As a matter of fact, the announcement constitutes a step in direction of peace, not war. Besides, in addition to fourteen thousand troops, the United States also has 25,239 private security contractors deployed in Afghanistan who will continue to assist the Afghan troops in their operations.

The growing footprint of the Islamic State’s formal franchise, the Islamic State of Khorasan (ISK), has also compelled the Taliban to engage in the peace process. If the war continues and the fight escalates, then the ISK will benefit from it and dent the Taliban’s credibility as a jihadist organization. The common criticism by the ISK on the Taliban has been its Afghan-centric approach, refusal to participate in jihad elsewhere and exploitation of Islam to restore its toppled regime in Afghanistan. Following battlefield losses and territorial setbacks in Iraq and Syria, as many as sixty-nine members of the Islamic State's core and three hundred to four hundred fighters have relocated to Afghanistan. Given this, further conflict perpetuation in Afghanistan will not favor the Taliban.

The contending view is more alarmist and considers Trump’s drawdown announcement from Afghanistan (coupled with full withdrawal from Syria) as capitulation of the United States’ influence to play a stabilizing role in conflict zones around the world. This will allow the competing states like Pakistan, Iran, Russia and China to fill the vacuum created by U.S. retreat in Afghanistan. The announcement is a recipe for regional proxy wars among competing states like Pakistan and India on Afghan turf. Further, it will dent the U.S. credibility among its friends and allies as a reliable partners and security guarantor.

Operationally and structurally, the Taliban are an insurgent and a jihadist organization. The Taliban do not have a robust political wing unlike Lebanese Hezbollah or Palestinian Hamas, which transformed into political parties and participated in elections. For the sake of argument, even if the Taliban had a political wing and they were willing to enter Afghanistan’s fragile and fractious political system, it would only exacerbate the existing ethnic, political, tribal and regional fault-lines.

In 2018, Afghanistan overtook Iraq as the most-affected country by terrorism. With the presence of over twenty insurgent and terrorist groups, Afghanistan has the highest concentration of violent extremist organizations in the world. The sudden drawdown announcement will create a triumphant jihadist narrative in the region that, after the former Soviet Union, another super power has been defeated in Afghanistan. It will mobilize worldwide terrorist recruitment. The Taliban’s field commanders are already in a celebratory mood and treating the announcement as a victory of sorts. Trump’s tweet will harden the Taliban’s position and embolden them to stick to their maximalist positions in peace talks.

At the same time, Al Qaeda in Afghanistan is far from defeated. On the contrary, the group has grown in size and numbers in recent years in Afghanistan. The U.S. fixation with the emergence of ISIS in Iraq and Syria allowed Al Qaeda to stay under the radar of U.S. intelligence and quietly rebuild its organizational infrastructure and augment its operational capabilities. It has proven to be resilient, adaptive and agile with tremendous regenerative capacity. The group is on the rebound and closely allied with the Taliban. The troops reduction will further ease the military pressure on Al Qaeda and allow it to expand further in Afghanistan.

The war in Afghanistan is at cross-roads and requires deft handling and leadership skills. Instead of searching for a hasty withdrawal through political quick fixes and half-baked peace deals, the United States along should ensure a political termination of the conflict that ushers in a stable political order. If history is anything to go by, what happens in Afghanistan does not stay in Afghanistan.

Abdul Basit is an Associate Research Fellow (ARF) at the S. Rajaratnam School of International Studies (RSIS) in Singapore. He can be reached at [email protected].