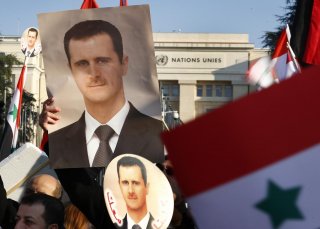 President Donald Trump appealed to the Syrian government at a March 19 press briefing to cooperate with the United States to find and help effect the release of photo-journalist, Austin Tice, who went missing in Syria in 2012 and, according to most reports, is being held hostage by an unknown group. Indeed, last year the Syrian government released an American blogger. And it is well-known that President Trump makes it a top foreign policy priority to return American hostages held abroad.

As such, a potential opportunity for the US and Syria to enter into a dialogue has materialized. After all, the whole premise of the talks between the US and the Taliban in Afghanistan started when an American was released last year. There has already been public acknowledgment of low-level official contact between the US and Syria last June, so it is not as though this is something completely off the charts, despite negative perceptions of the Syria government in the West.

With regional American allies such as the UAE, Egypt and Bahrain all re-establishing ties with Damascus as of late, coupled with the dire humanitarian and economic situation in Syria, this appears to be a moment when a bilateral dialogue might bear some fruit for each country.

A U.S.-Syrian understanding should be pursued first and foremost because it can save lives. But it can also advance U.S. interests. The former, by itself, usually isn’t enough. In combination with the latter, however, the parameters for a carefully managed dialogue are present.

Ironically, Trump asked Syria for help on Tice during a coronavirus briefing. If the coronavirus spreads in Syria, it is with this in mind that the US may consider some level of sanctions relief to ease the suffering.

Humanitarian Needs of the Syrian People

Various U.S. news outlets have now been to Syria since the end of the acute phase of the civil war in Syria. The one constant in the reporting has been that the sanctions, combined with a dilapidated and war-based economy, has created more difficult living conditions for ordinary Syrians than the worst phases of the war itself.

Syrians on the ground are in most need of help, suffering from ailments beyond the immediate scope of war, including cancer, diabetes, the resuscitation of diseases that had once been eradicated, such as smallpox and tuberculosis that have hit both young and old.

The current situation in Syria is terrible, much worse than the expected aftermath of eight years of civil war. The main difference now is the political and associated financial crisis in neighboring Lebanon as well as the global coronavirus pandemic. Recent UAE and Kuwaiti healthcare aid to Syria has helped the hospitals in Damascus, but it is not nearly enough. Similarly, David Beasley, director of the World Food Program, has repeatedly said the world must help Syrians in Syria as the best way to tackle the overall crisis.

Before the economic crisis in Lebanon emerged last fall, there was a feeling among most Syrians that they could muddle through. Outside of Idlib, the war was winding down, the Syrian government had extended at least nominal control over about 70% of the country, and the major Arab countries were mending relations with Damascus.

There was a palpable sense that Syria could slowly emerge from the cold. The country had, after all, been operating under sanctions from the West for forty years—Syrians know how to get around them.

The financial crisis in Lebanon, however, has hurt the Syrian economy more in a few months than the totality of sanctions imposed by the West has in eight years. And the first confirmed death of coronavirus could be an ominous sign for a health care system already under considerable strain.

For decades, Lebanon has been the banking outlet for Syrian money bereft of capitalist financial instruments in a state-controlled economy. The Syrian military and intelligence presence in Lebanon since 1975 has had as much economic as strategic value to Damascus.

During the civil war, as more sanctions shut Syrian business out of the global financial system, Syria’s economy came to depend more than ever on Lebanese banks. Now, with Lebanon’s banks tightly controlling hard currency withdrawals and transfers abroad in order to prevent capital flight, Syrian money has been inaccessible—in effect, trapped.

And it’s not just wealthy Syrians who are suffering. Middle-class Syrians who live off the interest on their savings in Lebanese banks no longer have access to these funds. As a result, inflation has soared in Syria; indeed, raises given by the Syrian government to public sector workers last November were wiped out by inflation in one week.

Syrians admit that the economy is teetering on virtual collapse.

Enter Trump's transactional foreign policy. There has to be something of value in return, from the perspective of Washington.

U.S. officials say that sanctions are not to effect a change of regime but a change in behavior; however, Damascus sees even the latter as trying to do the former through other means. The level of trust between the US and Syria is virtually non-existent. But if there are clear, identifiable quid pro quo interests, there are those in Washington and in Damascus who are willing to listen.

It’s easy to figure out what Damascus wants from the United State: sanctions relief, especially in the areas of health and education, from construction materials to rebuild hospitals and schools to medical equipment and computers for students.

Syrian officials repeatedly prioritize these above removing sanctions on Syrian political figures and businessmen—most of these people can get what they want through existing black-market channels, and the Syrian government has to maintain a social contract with its citizens at least at a minimum level.

Most importantly, this type of assistance will save lives and, perhaps, open up space for more humanitarian aid.

So what’s in it for the United States? The Trump administration’s long term foreign policy objective in Syria is to see a substantial reduction of the Iranian footprint. This, along with help in returning Austin Tice, might begin a U.S.-Syrian dialogue.

The good news is that most of the Syrian political elite, if not the majority of the population, would like Iran’s presence in the country reduced as well. And with the UAE, Bahrain, Egypt, Oman and other Arab states improving relations with Syria, this might provide some space for Damascus to balance off Iran.

The Syrian alliance with Iran, although strategically necessary, has always been uncomfortable for the secular, Baathist Syrian leadership. Iranian support to Syria has been critical during the civil war, but the support is usually on Iran’s own terms, and in isolation of Syrian institutions.

In contrast, the Russians, who would also like to see a reduced Iranian presence, have attempted to fortify and rebuild Syrian institutions, from more efficient governance to enhanced professionalism in the military-security apparatus. Moscow wants to make sure that its strategic position in Syria is maintained beyond Assad.

So there is a potential deal to be made, one that would most likely have to be preceded by confidence-building measures, such as granting licenses for U.S. private entities to provide a few freighters of humanitarian goods in return for some humanitarian gestures on the part of the Syrian government, such as help with hostage release.

This could then be ramped up to specific sanctions being lifted in return for reforms in local governance, rule of law, property rights, eliminating enforced conscription for returning refugees, and cooperation on counter-terrorism measures.

Then we get to the big-ticket items of systemic sanctions relief and the question of Iran. The case of Sudan could be model, i.e. a country, like Syria, on the original 1979 State Department list of states that sponsor terrorism, but it is now on the cusp of being removed from the list.

The Obama and Trump administrations dealt with a government that was similarly isolated and repeatedly sanctioned. U.S. officials basically determined that, in the end, sanctions were not working and that a phased process of mutual concessions was better for US interests.

Syria has traditionally had a far better regional standing than Sudan and—bordering Iraq, Turkey and Israel—a much more important geo-strategic position in the Middle East than Sudan ever had.

Sanctions won’t work in Syria, either. Waiting for Assad to fall is not a strategy, it’s a wish. The sanctions regime is useful if it is employed as a means to a negotiated end and not simply as a punitive measure.

This might also create some U.S. leverage vis-à-vis Turkey with regard to reconciling Ankara and Damascus, which may be the key to finally ending the final phases of the war in Idlib and elsewhere in the north of Syria.

Stabilizing Syria is not only important to a suffering population and regional security but also to stemming the refugee/migrant crisis that has already steered European politics toward right-wing nationalism. Addressing all of this revolves around Syria, and therefore it is in the interests of the US to engage with it.