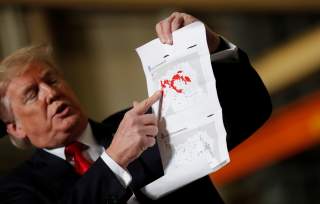 Now that “world’s number one terrorist leader” is dead, it’s time for all the high-fives. Baghdadi is dead and terrorism is likely to recede. Maybe not. Now that U.S. Special Operations, in conjunction with the CIA, have carried out the successful operation in Syria, there’s little time to waste. There’s another region that needs immediate attention. There’s Al Qaeda to watch out for, as well. It’s the country where Kalmay Khalilzad arrived on Sunday to talk peace again: Afghanistan.

After Afghanistan’s intelligence agency confirmed the death of Asim Umar, the leader of Al Qaeda’s South Asia affiliate, in a joint U.S.-Afghan raid conducted in Helmand last month, it may have posed more questions than it answered. Before delving into the policy implications, looking briefly at Asim Umar’s background might be useful.

After Abu Bakr al-Baghdadi laid the foundation of the Islamic State in the summer of 2014, Ayman Al-Zawahiri may have felt the need for some sort of reorganization within his own ranks, too. Remember: terrorist groups with seemingly similar ideologies don’t really cooperate with each other all the time; they, in fact, compete as well. Anyways, that’s for some other time. Almost three months into Baghdadi’s proclamation, Al-Zawahiri announced the launch of the group’s South Asia branch: Qaedat al-Jihad. And, it didn’t surprise many when Asim Umar, former commander of the banned Tehreek-e-Taliban Pakistan (TTP), was named as the “Emir.” As a side note, and to be better able to connect the dots, the TTP (considered a regional outlawed organization) declared allegiance to the Islamic State soon after their former strongman’s ascent to power in the ranks of Al Qaeda.

Born as Sanaul Haq and designated as a “specially designated global terrorist” by the United States in 2016, Asim was born sometime between 1974 to 1976 in Uttar Pradesh, India. As per Indian security officials, he moved to Pakistan in 1995, and, somehow, entered the realm of militancy by eventually joining Harakat ul-Mujahidin (HUM), a group that was designated as a Foreign Terrorist Organization (FTO) in 1997. Hatred for the United States is, perhaps, the strongest bond that united Al Qaeda and Asim Umar, as he was also a part of an Al Qaeda film that was released on the eleventh anniversary of the September 11 attacks. In addition to publishing a book about Blackwater named “The Army of Anti Christ,” he’d been quite categorical in his calls to “defeat America everywhere.”

Having studied at Jamia Uloom-e-Islamia in Karachi, a port city in the south of Pakistan, and at the more famous Darul Aloom Haqqania in northwest Pakistan bordering Afghanistan, the recruiting and operational strategy of the former leader of Al Qaeda in the region doesn’t seem to be too hard to decipher. Also, having some decent oratory skills along with a penchant for languages must not have harmed his cause, either.

The first question the U.S. policymakers need to look into is whether the latest raid can be considered a success. For Trump, it might be. From a policymaking perspective, it really isn’t. The elimination of a member of a terrorist group leaves a vacuum for other members to fill. Does that mean hunting down the bad guys be avoided? Absolutely not. However, efforts must be made to ensure such a vacuum isn’t filled easily. How Abu Musab al-Zarqawi was able to cash in on a similar situation in Iraq is a glaring example. Trump has had issues with the intelligence community, and his overreliance on artillery in Afghanistan hasn’t resulted in any strategic victories for the United States. With extensive use of military power, the United States is actually pursuing a reactionary approach in Afghanistan, where terrorist organizations like the Islamic State and Al Qaeda are looking to strengthen their footing and make a strong comeback, respectively.

Thereby, it’s important to stay left of boom, be proactive, and avoid waiting for the boom to happen to make the call. Interestingly, there’s a book titled Left of Boom: How a Young CIA Case Officer Penetrated the Taliban and Al-Qaeda that offers more insight into what the above-mentioned strategy might look like. When Trump unveiled his South Asia strategy in August 2017, he categorically stated, with reference to Afghanistan, that “We are not nation-building again. We are killing terrorists.” Fair enough. But, what about penetrating the ideology and decimating a terrorist group from within?

Second, the Trump administration needs to learn the art of keeping the cards close to its heart. It’s important to keep the adversary guessing, and when you have to deal with groups like the Islamic State and Al Qaeda, giving out withdrawal timelines, for instance, plays into the hands of terrorist organizations that might be looking to relocate. The logic behind the rationale is simple: Even if the Taliban or any regional entity were to contemplate genuinely cooperating with the United States in combating terrorist groups in Afghanistan, announcing a withdrawal time frame would make those parties less interested in working with Washington.

Third, Trump may have already figured out that Pakistan is a key player in the war in Afghanistan. His latest mediation proposals between India and Pakistan over Kashmir can serve as an ideal precursor for Washington to seek leverage over Islamabad. There’s no such thing as a free meal, and Trump might want to convey this to the prime minister of Pakistan. Mediation on Kashmir can be transacted with delivering the goods in Afghanistan. This is all conjecture at this point in time, but this is surely an opportunity the Trump administration might want to look into. Things aren’t looking good with regards to peace in Afghanistan, so it wouldn’t hurt much to try this option out, anyway.

Shazar Shafqat is a counterterrorism analyst, and currently part of the Non-proliferation and Terrorism Studies program at the Middlebury Institute of International Studies in Monterey, California. He previously served as a faculty member at the National Defense University (NDU) in Islamabad, Pakistan. He’s frequently been published and has also been quoted in the Washington Post, Stars and Stripes, among others.