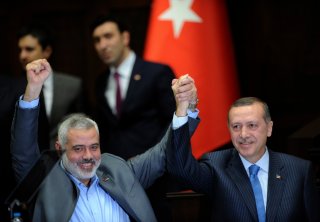 For years, instead of focusing on problems plaguing much of the Arab world such as corruption, bad governance, and lack of accountability, too much attention was drawn to Israel and the plight of the Palestinians.

While the myth of the Israeli bogeyman was lifted after the Arab uprisings since 2010 and now with the normalization of relations between Israel and the United Arab Emirates, Bahrain, and now Sudan, there is one country which still uses the Israeli-Palestinian conflict as a means to win favor among the so-called “Arab street” and propel itself as a leader of the Muslim world. That country is Turkey.

Following the historical agreement between Israel and the UAE to normalize relations, Ankara, which has diplomatic relations with both countries, commented that this “move against Palestine is not a step that can be stomached” and threatened to cut diplomatic relations with the UAE. Turkey’s vociferous reaction to the breakthrough in better Arab-Israeli relations was only surpassed by the Islamic Republic of Iran.

Indeed, Turkey has become one of Israel’s leading critics. As early as 2004, Erdogan called Israeli assassinations of Hamas leaders such as Sheikh Yassin examples of “state terrorism.” Erdogan stormed out of the Davos Summit in 2009 after publicly declaring that the late Israeli President Shimon Peres “knows well how to kill.” The then-Turkish prime minister was upset because the Israeli Nobel Peace Prize Laureate explained that Israel’s actions against Hamas were designed to prevent rocket fire at civilian Israel communities. In 2010, Ankara dispatched the Mavi Marmara, a ship commandeered by a government-backed Islamic charity, to circumvent Israel’s blockade of the Hamas run Gaza Strip. Upon the vessel’s approach to Gaza, Israeli commandoes swooped on board but were attacked by a baton-wielding crew. Nine Turks were killed in the ensuing conflict; however, a UN report into the matter apportioned much of the culpability to Turkey. Erdogan’s response, however, was that “the world now perceives the Star of David alongside the Swastika.”

After the U.S. administration in Washington unveiled its long-awaited peace plan in January of this year, President Erdogan publicly rebuked Saudi Arabia and other Gulf nations for not speaking out against it.

Instead, Erdogan has been doing everything in his power to oppose U.S. policy towards Israel. In September this year, Turkey hosted reconciliation talks between Hamas and Fatah. Turkey hosts many Hamas figures and has even granted citizenship to high ranking members of the terror group’s military wing, despite the fact that they were actively plotting attacks against Israeli targets. Erdogan and other high-level Turkish government officials regularly meet Hamas leaders including the group's leader, Ismail Haniyeh. In addition, even more egregiously, Reuters reported citing a senior Israeli diplomat that “Turkey has given passports to a dozen Hamas members in Istanbul.” All of this prompted a rebuke from the U.S. State Department against the head of its NATO ally.

“President Erdogan's continued outreach to this terrorist organization only serves to isolate Turkey from the international community, harms the interests of the Palestinian people, and undercuts global efforts to prevent terrorist attacks launched from Gaza,” the State Department said. “We continue to raise our concerns about the Turkish government's relationship with Hamas at the highest levels. This is the second time President Erdogan has welcomed Hamas leadership to Turkey this year with the first meeting occurring February 1.”

Then last October Erdogan declared that Israel’s capital Jerusalem “is our city,” pledging support for the Palestinian cause which he called “the bleeding wound of the global conscience.” Two years earlier, in May 2017, President Erdogan hosted a two-day conference which aimed to discuss ways of reclaiming Ottoman properties in Jerusalem in order to hand them back to their “true inheritors,” the Palestinians.

However, just as bad as the anti-Israeli and antisemitic rhetoric and sympathy for Hamas was Turkey’s rising contributions to the United Nations Relief and Works Agency for Palestine Refugees in the Near East (UNRWA). In 2008, Turkey’s funding of UNRWA was as little as $750,000; however, as Turkey seeks to gain influence in the Muslim world it has increased its contribution, especially after the United States decided in 2018 to withdraw funding to the controversial UN organization. In 2018, Turkey contributed over $18.7 million to UNRWA. In 2019, despite a plummeting lira, rising unemployment, declining growth, and a serious balance of payments problem, Ankara continued to fund UNRWA to the tune of $11 million.

Turkey’s increased funding of UNRWA represents yet another example of Ankara’s grandiose dreams to become a global power at the expense of the United States. Indeed, Erdogan often repeats the phrase “the world is bigger than five,” meaning the five permanent members of the Security Council—the United States, UK, France, China and Russia, the latter which Ankara has cozied to. Earlier this year, in a speech pertaining to the COVID-19 pandemic, Erdogan declared that the West’s prosperity “based on the blood, tears, pain and exploitation of the rest of the world” is now coming to an end.

At the end of the day, Ankara’s funding of UNRWA, once again shows its true colors, its desperate need to show itself as a leader of the Muslim world, even if that means contributing to exactly what ails the Middle East, namely, corruption, bad governance and lack of accountability.

Simon A. Waldman is an Associate Fellow at the Henry Jackson Society and a Visiting Research Fellow at King's College London where he was previously a lecturer.