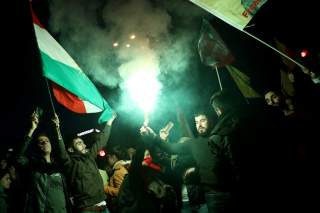 The American betrayal of the Syrian Democratic Forces (SDF) bears an uncanny resemblance to what happened in Kirkuk two years ago. The geopolitical dynamics are strikingly similar: Turkish hostility to Kurdish aspirations, American intransigence and unwillingness to support the Kurdish allies they relied on to defeat the Islamic State, resulting in a win for Iran.

On October 16, 2017, the disputed territory of Kirkuk was retaken by Iraqi forces supported by Iranian-backed militias. What prompted the retaking of Kirkuk was a referendum on independence that would have allowed the semi-autonomous Kurdistan Region to begin talks with Baghdad, potentially leading to independence. Kurdish Peshmerga stationed in Kirkuk were unable to fend off the incoming forces due to the lack of a unified command structure. However, miscalculations about the willingness of the United States to defend them also played a role. These miscalculations stemmed in part from mixed messages. First, American officials urged Kurdish officials to merely postpone the referendum. This led certain Kurdish politicians to believe they were not opposed in principle to holding the referendum, but just to the timing. Later, however, U.S. officials began calling the referendum “disruptive.” Some Kurds believe the U.S. stance hardened due to pressure from Turkey and Baghdad.

Turkey and Iran vehemently opposed the referendum on independence in Iraqi Kurdistan, fearing that it could inspire their own restive Kurdish minorities. Turkish president Recep Tayyip Erdogan declared that the peaceful referendum was a threat to Turkey’s national security. Erdogan warned Iraqi Kurds that they would “go hungry,” and to halt trade relations with the KRG. During Erdogan’s visit to Tehran on October 4, Supreme Leader Khamenei called the Kurdish referendum a “treason against the whole region.” Just twelve days later, Iraqi and Iranian forces moved into Kirkuk.

The mixed messages sent by President Donanld Trump in Syria have been even more treacherous. The Northeast of Syria is plunged into chaos as U.S. troops withdraw while the Turkish invasion continues apace. Trump so far has made no indication of wanting to withdraw some five thousand American forces who are currently based in Iraq. However, given the erratic nature of his decisionmaking, and repeated pledges to “end the endless wars,” this cannot be ruled out.

With the White House currently occupied by a president whose foreign policy can change on a dime, Iraqi Kurds should look inward for empowerment. Integrating the Peshmerga and political institutions of the KRI and improving relations  with Baghdad would be a good place to start. The Kurdistan Region of Iraq remains essentially divided into two separate administrations: the KDP stronghold dominated by Barzani based in Erbil, and the PUK stronghold based in Suleimani, headed by the Talabanis.

The political fragmentation of the Kurdistan Region into separate fiefdoms has been a cause of concern for previous American administrations with a more nuanced understanding of the regional landscape. After years of infighting and decades of hostility, known as Brakozhi (fratricide) in Kurdish, the KDP and the PUK signed up to a peace agreement in 1998. The Washington agreement was proceeded by a ceasefire and catalyzed by the United States under Secretary of State Madeleine Albright. The agreement ended a long history of violence and bitter recriminations between the two main Kurdish parties. The United States, along with some European countries, worked with the Ministry of Peshmerga to unify and reform its forces.

While it is true that Turkey is an important economic and energy partner for the KRI, Turkey continues to prioritize a security-based approach to all Kurds across the wider region, regardless of party affiliation or political orientation. Erdogan’s likening of the KRI to a “swamp,” might rightly invoke serious concerns in Iraqi Kurdistan, a region that has normally enjoyed favorable relations with Turkey. Turkish officials claim that the ongoing intervention in Syria is about targeting the SDF, which they believe is the Syrian affiliate of the PKK—even though the majority of rank-and-file SDF members are now Arabs, not Kurds.

As early as 2003, Turkish intelligence was accused of an assassination attempt of a Kurdish official in Kirkuk in order to destabilize the area and justify Turkish intervention. Erdogan also threatened to intervene in Kirkuk in 2007 when the deadline for the implementation of Article 140 neared—which had nothing to do with the PKK. Turkey warned that they could intervene in Kirkuk within a span of eighteen hours.  Ten years later, in October 2017, Turkey amassed forces on its Iraqi border, and came out strongly against the referendum on independence, although it was championed by the KDP and Masoud Barzani himself, who allegedly had cordial relations with Ankara. Turkish Prime Minister Binali Yildirim said any threats from inside or outside Turkish territory would face “immediate retaliation.” The amassing of Turkish troops on the border of the Kurdistan Region of Iraq strained Ankara’s relationship with the KRG, which has yet to recover.

It is true that the KRG had major internal problems related to corruption, mismanagement and fragmentation that all culminated in the setback of October 16, 2017. But many still blame the United States for not acting to halt the forward advance of Iraqi forces and Iranian militias as they recaptured Kirkuk. To avoid future similar setbacks, the KRG should curtail party-political hegemony on its institutions in a manner ensuring unhindered reach across the KRI. An independent investigation into what exactly happened on October 16, including an alleged assassination attempt of the former governor of Kirkuk, Najmaldin Karim, is currently unfeasible because KRG’s institutions are limited to political party fiefdoms, the green and yellow zones. Importantly, in addition to depoliticizing Peshmerga recruitment, the Ministry of Peshmerga should exert extra efforts to revamp its structure to ensure efficient command and control.

Turkey’s military incursion over the past week has already wreaked havoc inside Syria and escalated the crisis in U.S.-Turkish relations. But it may also spark internal violence inside Turkey. Furthermore, Erdogan’s handling of the refugee issue has strained relations with the European Union.

It is true that Turkey has played an important role in hosting an estimated 3.6 million Syrian refugees. However, the Kurdistan Region of Iraq (KRI) has also hosted many refugees and internally displaced persons (IDPs). With a population of just five million, the KRI has housed a significant number of IDPs and refugees. To date, it still hosts 700,000 IDPS and 250,000 Syrian refugees which is likely to increase given the Turkish assaults in Syria.  [Wv5] And unlike Turkey, the KRI has not weaponized the displaced community against its neighbors despite massive political and financial burdens.

The Turkish intervention, American withdrawal, and resulting chaos should be a wake-up call to the Kurdistan Region. The instability has already allowed some ISIS militants to escape from detention facilities in Syria. The Al Hol camp, housing tens of thousands of ISIS fighters and their families, is just fifteen kilometers from the Iraqi border. Until quite recently, part of the Syrian-Iraqi border was under the control of the Islamic State caliphate. It is not inconceivable that escaped ISIS militants could attempt to regain control of the border, allowing ISIS fighters to flow freely back and forth between Syria and Iraq. There is an urgent need for cross-border security cooperation between the Kurds on both sides of the border, and with central Iraqi government forces further south along the Iraqi border. If Iraqi Kurds learn the right lessons from the Syrian tragedy, and make the necessary reforms, then they may come out stronger in the end.

Amy Austin Holmes is a Visiting Scholar at Harvard University’s Middle East Initiative. She is the author of Social Unrest and American Military Bases in Turkey and Germany since 1945 and Coups and Revolutions: Mass Mobilization, the Egyptian Military, and the United States from Mubarak to Sisi, published by Oxford University Press in 2019. She conducted the first field survey of the SDF published by The Wilson Center. @AmyAustinHolmes

Khogir Wirya is a Fulbright scholar at Brandeis University in the Conflict Resolution and Peacebuilding Program. He is the author of several reports on the Kurdistan Region and disputed territories, including “The Future of Kirkuk: A Roadmap for Resolving the Status of the Province” published by the Middle East Research Institute. @KhogirW