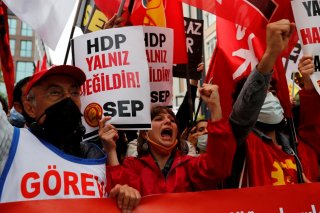 It became clear immediately that the shooter, Onur Gencer, had planned for a massacre. He told police that he had hoped to kill “more people,” but had only found one person in the building. An HDP official later said that a forty-person meeting was planned for the office for that morning, but had only been canceled at the last minute.

It was also clear that Gencer was no ordinary criminal. His Instagram account revealed that he recently spent time in Turkish-controlled northern Syria and had easy access to firearms while there. It showed his ultranationalist tendencies, too: in one image, he makes a hand gesture associated with the Grey Wolves, a far-right paramilitary group affiliated with the Nationalist Action Party (MHP), which forms part of Turkish President Recep Tayyip Erdogan’s ruling coalition.

Though the HDP’s offices are under constant surveillance, Gencer was not stopped on his way in. Police arriving after the murder detained him without the use of force, respectfully asking him his name and leading him away from the crime scene.

The murder laid bare the violent roots of Turkey’s unresolved Kurdish question—the driving force behind the country’s deepening domestic authoritarianism and expanding foreign wars. It also proved, like so many tragedies before it, that without a political solution based on equal rights and self-determination, there will only be more deaths, deepening autocracy, and entrenched conflict.

A History of Violence

The Izmir shooting was not the first time that a civilian Kurdish party was met with armed force by a pro-government attacker. Since the formation of the first pro-Kurdish political parties in Turkey in the 1990s, members and supporters of these parties have been threatened and killed by security forces and state-affiliated groups.

In 1991, Vedat Aydin, a leader of the People’s Labor Party, was abducted from his home in Diyarbakir by armed men who claimed to be police officers. His body was found miles away two days later.

In 1993, Mehmet Sincar, an elected minister of parliament (MP) for the Democracy Party, was shot and killed in Batman after attending the funeral of another Kurdish politician. The attackers reportedly planned to assassinate Leyla Zana, the first Kurdish woman ever elected to parliament, who became a target for nationalists after adding a single sentence in Kurdish while taking her oath of office. An Amnesty International report noted that Sincar was the “54th and most high ranking” member of his party to have been killed in the two years leading up to his murder.

These murders have continued well into Erdogan’s rule, once again targeting Kurdish politicians who have committed no crime other than working as the representatives of their people. In 2016, Seve Demir, Fatma Uyar and Pakize Nayir, local political figures in Silopi, were targeted by the military while that city was under siege. Mehmet Tunç and Asya Yuksel, elected co-chairs of the Cizre People’s Assembly, were among the hundreds of civilians burned alive while trapped in basements there that same year.

Repression of the HDP

The Erdogan government’s policy and rhetoric towards the HDP has created a climate ripe for further violence of this kind—and was likely one of the instigating factors for the attack.

Founded in 2012, the HDP built on the legacy of the pro-Kurdish parties that came before it, while expanding its program to include the concerns of other oppressed groups in Turkey, including women, non-Muslim minorities, and the LGBT community. When peace negotiations between the government and the Kurdistan Worker’s Party (PKK) began in 2013, HDP politicians played key roles as mediators.

However, the party’s electoral popularity—made possible by the democratic opening that peace talks enabled—became a threat to Erdogan. In the June 2015 parliamentary elections, the HDP won more than 6 million votes and eighty seats, denying Erdogan’s Justice and Development Party (AKP) a majority.

As peace was no longer electorally beneficial, Erdogan chose war—allying with ultranationalists, resuming the fight with the PKK, and beginning efforts to wipe the HDP off of Turkey’s political map completely.

In 2015 and 2016, the Turkish military razed Kurdish cities where the HDP’s voter base was strong, displacing hundreds of thousands of civilians. Months later, dozens of elected HDP MPs and mayors, including party co-chairs Selahattin Demirtas and Figen Yuksekdag, were jailed on terrorism charges. More joined them after the 2018 parliamentary and 2019 local elections when the party won back seats despite severe repression and efforts to suppress the vote.

This year, a case to formally close the HDP and ban almost 500 of its leading figures from politics was formally filed. Like the cases against its predecessors, it is all but guaranteed to go through. Several HDP politicians are also facing multiple life sentences in what is essentially a show trial, centered around the HDP’s call for the Turkish government to do more to fight ISIS in the fall of 2014.

Openly violent rhetoric against HDP politicians and supporters is now an established fixture of Turkish political culture. In December 2020, MHP deputy chair Semih Yalcin called the party a “pest swarm” that needed to be “culled.” In February 2021, senior AKP official Fahrettin Altun shared an image of Selahattin Demirtas with target sights superimposed on his face. In April, a former IYI Party MP told HDP MP Garo Paylan, who is Armenian, that he deserved a “Talaat Pasha experience”—referring to one of the perpetrators of the Armenian Genocide.

So is actual violence. Dilek Hatipoglu, the former elected co-mayor of Hakkari, appeared in court in February 2021 with visible bruises after being beaten by prison guards. Sevil Rojbin Çetin, the former elected co-mayor of Edremit in Van, was tortured, stripped, and bitten by dogs during a house raid in July 2020. In March 2018, after giving a speech condemning the invasion of Afrin, Syria, HDP MP Mahmut Togrul was attacked by AKP MPs on the floor of parliament. He was hospitalized with a broken arm.

Every one of these actions over the past six years has been justified by Erdogan’s government as a necessary part of the fight against the PKK—despite the HDP’s commitment to peace and the AKP’s role in resuming the war. When Onur Gencer told authorities that he targeted the HDP’s Izmir offices because he wanted to kill “PKK members,” he was only repeating the rhetoric and the use of force that Erdogan’s regime has directed against HDP officials, members, and supporters for the better part of a decade.

Turkey’s Syria policy has always been inseparable from its domestic Kurdish question. Since the beginning of the Syrian conflict, Turkey’s use of Islamist armed groups to thwart the creation of an autonomous Syrian Kurdish political entity on its border has been well-documented.

Less discussed, however, is the way in which the pool of armed, radicalized men that Turkey’s Syria policy has created have been used against Turkey’s domestic opposition and their political goals. Between June 2015 and March 2016, four ISIS attacks hit Kurdish and pro-Kurdish targets in Turkey at politically sensitive times, killing nearly 200 civilians in total—and no members of the security forces.

The first of these attacks hit an HDP election event in Diyarbakir less than forty-eight hours before the June 2015 elections. The most devastating, with 103 casualties, hit a peace rally organized by the HDP and other progressive organizations in Ankara in October 2015, as talks with the PKK were falling apart.

Given the timing and targets, it is highly unlikely that Erdogan’s government had no knowledge of these attacks at all. This is important context for understanding why Onur Gencer’s time in Syria matters. While there, he had the ability to obtain weapons, as the pictures on his Instagram account show. One image was taken at a Turkish base near Manbij, an area he could not have been able to access without permission. Turkish security forces would have to have been aware of who he was.

Gencer’s former colleagues told Turkish newspaper Gazete Duvar that he was “always angry” upon returning to Izmir and was “constantly talking about getting a gun license.” He was evidently able to obtain one—and more recent images on his Instagram show him training at what appears to be a local range. Mezopotamya Agency reported that he often spent time at a hotel in Izmir whose board is chaired by an AKP member, and which is frequented by top AKP officials.

With surveillance in Turkey ubiquitous enough to sweep up Kurds talking about weddings and Twitter users who post memes poking fun at Erdogan, a man who had spent time on Turkish bases in Syria and had obtained a gun license despite the worries of his neighbors would have been on the government’s radar. If nothing else, Gencer was allowed to plan and execute his attack without interference—similar to the ISIS attackers who targeted the HDP before him.