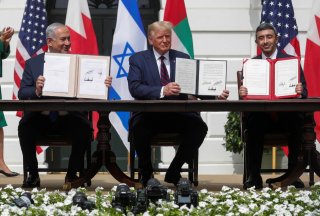 Criticism of Israel’s treaty with the United Arab Emirates (UAE) has been relentless. The New York Times’ Roger Cohen calls it “Trump’s Middle Eastern Mirage” and “something rotten.” A Washington Post oped calls it “a big step – in the wrong direction.” Reporting by Bloomberg describes the deal as “thin.” Middle East analyst Daniel Levy writes that the agreement is merely “the codification of an existing reality” which does “nothing by way of advancing peace in any arena.” They are wrong.

The “Treaty of Peace, Diplomatic Relations and Full Normalization Between the United Arab Emirates and the State of Israel” is a robust, legally binding peace treaty that represents a strategic pivot by the UAE. The UAE-Israel Peace Treaty commits the two countries to a relationship far warmer—and with far more intensive cooperation in economic, scientific, and social fields—than the cold peace Israel has with Egypt and Jordan (outside the security field).

The UAE’s pivot will facilitate peace between Israel and the Palestinians by showing that Arab governments and their citizens benefit more by partnering with Israel than by seeking to isolate or dismantle it. In addition, by demonstrating lost Arab League support for maximalist positions, the treaty will hopefully encourage the Palestinians to adjust their demands and accept a compromise two-state solution such as those which they rejected in the Olmert Plan of 2008 and the Clinton Plan of 2000.

The UAE was included as recently as July on the U.S. Treasury’s list of countries requiring cooperation with an international boycott. Although the UAE announced in 1996 that it would enforce only the primary boycott, U.S. firms had as of August 2020 reportedly “continued to receive . . . secondary and tertiary boycott requests from the UAE.”

In contrast, the visionary UAE-Israel Peace Treaty commits the two countries “to chart together a new path to unlock the vast potential of their countries and of the region.” It declares their “shared belief that the establishment of peace and full normalization between them can help transform the Middle East by spurring economic growth, enhancing technological innovation and forging closer people-to-people relations.” In negotiating terminology, the treaty seeks to expand the pie, transforming Arab-Israeli relations from the current zero-sum conflict into win-win cooperation to achieve mutually beneficial peace and prosperity.

The Bahrain-Israel declaration signed the same day declares a similar vision but is not a treaty and is far briefer, presumably because the Bahraini breakthrough occurred just before the ceremony. A more detailed agreement will presumably follow.

The UAE and Israel also commit, including in the treaty’s title, to “full normalization” of relations between them. “Normalization” has a specific meaning in the Middle East. Driven by Palestinians and their supporters, many Arab states maintain “anti-normalization” laws and policies that harshly punish any citizens and residents who engage in people-to-people relations with Israelis. The punishments include imprisonment and revocation of citizenship. These anti-normalization efforts remain so problematic that they are the subject of a bill introduced in August 2020 by Senators Cory Booker (D-NJ) and Rob Portman (R-OH).

In sharp contrast with anti-normalization efforts, the UAE and Israel agreed to “forging closer people-to-people relations” and “cultivating people-to-people programs...and cultural, academic, youth, scientific and other exchanges between their peoples.”

The treaty also diverges from the traditional litany of Arab League prerequisites for even a cold peace with Israel. It does not include an Israeli commitment to refrain from annexation, despite press reports that such a commitment was central to the deal. Also, in a stark departure from the Arab Peace Initiative (API) which since 2002 has represented the Arab League’s minimum requirement for peace with Israel, the agreement makes no mention of the API, of Israeli withdrawal from territories occupied in 1967, of a Palestinian state, or of Palestinian refugees (let alone any “right of return”).

Nor does the treaty mention UN Security Council Resolution 242, which was referenced in the API, the Israel-Egypt and Israel-Jordan peace treaties, and ritualistically elsewhere for decades as the agreed international formula for resolving the Arab-Israeli conflict: Israel is to trade occupied territory for Arab peace commitments. Instead, the agreement offers a more flexible formula for peace, “a negotiated solution to the Israeli-Palestinian conflict that meets the legitimate needs and aspirations of both peoples.”

The UAE’s commitment to sweeping government to government cooperation with Israel, close people-to-people relations with Israelis, and other stark departures from the zero-sum Palestinian agenda represent a remarkable strategic pivot. The UAE’s pivot, and that of Bahrain, will hopefully spark a long-overdue peaceful revolution in relations between Israel and the rest of the Arab world, including the Palestinians. The entire region would benefit from following the UAE’s lead and transforming Arab-Israeli relations from unproductive conflict to fruitful cooperation.

Orde Kittrie is senior fellow at the Foundation for Defense of Democracies and law professor at Arizona State University. He previously served for ten years as a U.S. State Department attorney. Follow him on Twitter @OrdeFK