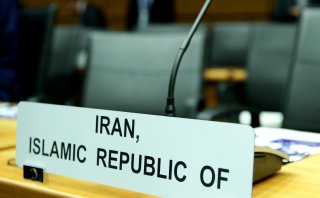 Thirty-three year old Emran Roshani-Moghadam worked as a security guard at the F19 well at the Yadavaran oil field in Iran’s petroleum-rich but deeply impoverished province of Khouzestan. His monthly salary could feed his family for barely a week, and he hadn’t been paid in many weeks. Desperate, he called the oil ministry contractor who had employed him to request a modest loan, something he hoped could hold the family over until wages might be paid again. Rejected, he got off the phone, walked over to the F19 oil well and hung himself.

Emran’s lifeless body hung there for his colleagues to bear witness. Photos brought his anguish to all the Iranian people and to the corrupt, theocratic mafia state. The tragedy of Emran’s suicide is one that is repeated every day all through the country, even recently by a twelve-year-old girl suffering from poverty, but the image of Emran’s body hanging dead beside an oil well holds an especially profound and historic irony. In 1979, it was oil workers whose strike made for the revolution’s tipping point.

Four decades later, the Supreme Leader Ayatollah Khamenei’s regime sits on vast reserves of wealth—holdings estimated at between $95 billion and $300 billion—much of it confiscated from the Iranian people, much of the rest profit off of sale of the very oil Emran guarded. As hard-working Iranians struggle to afford basic necessities, they witness grotesque displays of corruption from regime officials, and watch as the rich kids of the supposedly pious—the aghazadehs—post about their hedonistic consumption and sexual extravagances on social media.

The Islamic Republic of Iran’s blending of religion and Marxist negation of private property means that beneath its veneer of turbans, veils, mosques and prayers, it is a totalitarianism that shares much with Communist and Socialist states like the Soviet Union or current day Venezuela: Orwellian exploitation of workers in the name of the worker, repression of all basic rights, severe loss of livelihood, a kleptocratic class that maintains regime survival, and all manner of lies to sustain the myth of a just, egalitarian society battling the evil, capitalist West.

Like in other anti-capitalist states, workers in Iran are prohibited from organizing. The assumption is that a Godly, Marxist state has elevated the “mostazafin,” or the downtrodden in whose name the revolution was waged, and is always and already providing for all. The regime pummels propaganda to maintain the myth of economic liberation but the truth is that Iranian workers are routinely denied wages, lack benefits, are forced into exploitative contracts and suffer from dangerous work conditions. As a result, even highly educated Iranians are working as kulbars (human mules carrying heavy cargo across mountains) and the regime itself admits to having hundreds of thousands of child laborers.

This is happening to a country with tremendous natural resources and a skilled population, not to mention one that before the revolution was economically dwarfing South Korea and Turkey, with laws and welfare policies that protected the rights of workers and children.

On top of the forty-one-year failure of Marxist economics and ensuing, systemic corruption, the world’s top sponsor of terror has fallen under unprecedented pressure from sanctions. Having nearly all its sources of revenue cut off, Khamenei and his henchmen are holding tight to their financial reserves rather than paying workers like Emran. But as the value of the currency has hit an all time low and prices for basic goods continue to skyrocket, the regime is making a big gamble by withholding wages. Before the reimposition of sanctions, in late 2018, while Iranians were to be enjoying the fruits of the Joint Comprehensive Plan of Action nuclear deal, they braved a violently repressive state by protesting in all major cities and even small towns throughout the country. Their anger was especially fierce in slogans against the so-called moderates whose electoral promises of improved livelihood they saw as nothing more than lies to sustain the regime’s hold on power.

Intermittent rallies have followed that eruption of dissent which was the largest since the revolution, and in November 2019 the regime shot to death at least 1,500 protestors. The demand for a complete end to Islamist rule has been unmistakable. Alongside these protests, Iranian workers from nearly all economic sectors have staged strikes. Bazaar shop owners, truckers, steel workers, farmers, teachers, autoworkers, miners, nurses, public transport drivers, sugar mill workers, and more have refused to work, with some sectors

like teachers and truckers able to stage multiple, nationwide work stoppages. One notable, potent exception has been the oil workers, who have yet to organize in a large and sustained manner. If they do, and if workers from the other sectors manage to consolidate their strikes, the regime will be faced with the power of the powerless much like the Solidarity union that was instrumental to bring down Communism.

Despite the immense, latent capacity of Iranian labor to defeat a regime responsible for four decades of global terror and the killing of hundreds of thousands of innocents in the Middle East, the free world has not invested in its potential. America’s help to Solidarity meant that while unionists in Poland faced violent repression, with the funding they received via the AFL-CIO, they were able to feed their families when they themselves were imprisoned for striking and were able to procure printing presses, mimeographs, telexes, radio broadcasting equipment, computers and video cameras to facilitate their underground organizing and sensitive communications with the West.

The free world should provide similar assistance to Iranian workers. They need it, deserve it and know how to use it. The U.S. State Department does have a fund to support democratic change in Iran, but the grants it provides average below $2 million each, with very little devoted to supporting Iranian labor organizing. A fund devoted especially for Iranian workers would focus resources and moral support on those best positioned to take on Khamenei’s mafia state. It is an idea that should easily be supported by both Democrats—who champion labor rights at home and globally—and Republicans, who have long backed democratic change in Iran.

America should strategize its Iran policy as such with the understanding that it is the regime—not the people—that promulgates the claim that outside assistance tarnishes or endangers the struggle of workers, much like the Communists said about America’s support to Solidarity. The reason the regime tells this lie is because it knows the depth of dissatisfaction among workers and their families, and because it knows that once workers are able to unify, there is little that a detested cabal of clerics and thugs can do to stop them.

Mariam Memarsadeghi is a leading proponent for a democratic Iran. She previously was co-director of Tavaana: E-Learning Institute for Iranian Civil Society, which she co-founded. Follow her on Twitter @memarsadeghi.