The United States Should Keep Saudi Arabia at Arm’s Length 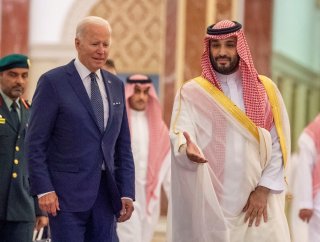 As the classic saying goes: some things are easier said than done. President Joe Biden’s 2019 statement on making Saudi Arabia a pariah state is one example of this aphorism in action. Biden is visiting Saudi Arabia, with oil and the 2018 killing of Jamal Khashoggi being the two main topics in the spotlight. The issue of oil is pertinent to U.S. domestic politics. Biden’s approval ratings stand at 39 percent, 2022 midterm elections are coming up in November, and gas prices climbed to $5 per gallon in June, a record high. From this perspective, it's reasonable for Biden to want to increase the supply of oil in the market, thereby showing an attempt to decrease the price of oil.

Jamal Khashoggi’s murder remains one of moral gravity. While Janan Ganesh is correct to say that separating the world into democracies and autocracies is counterproductive, there must be some moral red lines. As Harry Hart said in the movie Kingsman, “Manners maketh the man.” In other words, it doesn’t look good for the United States to brush aside the hacking to bits of an American resident working as a journalist within a NATO member’s borders.

First, it is undetermined whether Saudi Arabia will increase the oil supply. In a conversation with Biden, Emmanuel Macron claimed Saudi Arabia’s Mohammed bin Salman (MBS) told him the kingdom is at a “maximum” production level of oil. This position could be a bluff on the part of MBS, one that the United States should call. There is concern among oil producers, including oil-producing countries, that increasing the oil supply would create a glut in the market. The Saudis also maintain neutral relations with Russia. Increasing oil supply when Russia is attempting to use its production as leverage would likely make the Russians more hostile to the Saudis.

Giving into Saudi demands for the sake of oil also damages the United States geopolitically—specifically regarding Iran. If the United States is to have any chance of achieving a new nuclear deal with Iran, the Biden administration must be mindful of anti-imperialist sentiments throughout the country. Let's not forget that America's interventions in Iran and its close relations with Mohammad Reza Shah helped instigate the anti-Americanism of the 1979 Iranian Revolution. If the United States gives in to every demand of the Saudi government—a regime Iran regards as an instigator of sectarian rivalries—it will be to America's detriment in attempting to achieve better relations with Tehran.

There are other forms of power besides economics. The world isn’t some large New York Stock Exchange where only money matters. Culture, military affairs, history, geography, and ideas also matter—in many cases, even more than money and economics. If money mattered so much in international affairs, then some wars, such as World War I or the American Civil War, would never have happened.

While it may be difficult for the United States to get justice from Saudi Arabia for the killing of Khashoggi, it can learn from this tragic episode the disastrous consequences of becoming too close to another country, especially one with an autocratic government like Saudi Arabia. The United States should avoid repeating its mistakes in its relationship with Saudi Arabia. Biden now has the opportunity to change this relationship for the better. There are several ways the Biden administration can create this more balanced relationship.

First, the U.S. government can invest in domestic renewable energy sources. Such energy diversification solves the problem Aaron David Miller brings up about how the world views its relations with the Kingdom as “too big to fail.” The United States should also limit its weapons sales to defensive weapons to the Saudis. Daniel DePetris alludes to this point, advocating for the United States to stop the “transfer of air-to-ground munitions.” Limiting weapons sales to defensive ones prevents a paranoid Iran from pursuing desperate measures. More importantly, such action would prevent American arms from being used for atrocities, such as in Yemen. Finally, the United States should advocate for limited human rights within Saudi Arabia. As Gregory Gause III makes clear, the United States can encourage autocratic countries in the Middle East to “treat their citizens with dignity and respect” without getting into the muddied business of democracy promotion.

With the United States taking a step back from Saudi Arabia, it can avoid the need to fund and endorse inhumane regimes which embody the antithesis of the spirit of America. At a time of eroding democratic norms and a decline in how the world perceives America, it's not so far-fetched to say the United States should not wholeheartedly embrace every country based solely on economic and energy interests.

Benjamin Giltner is a Contributing Fellow at Defense Priorities.