The United States Should Leave Yemen, Not Broker Peace 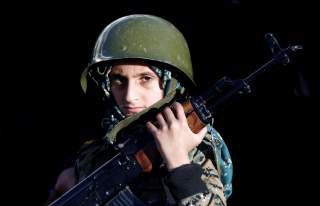 Defense analysts around the world must have done a simultaneous spit-take on October 30 when Secretary of State Mike Pompeo and Defense Secretary James Mattis demanded an immediate ceasefire in Yemen and peace talks within thirty days. After more than three and a half years, U.S. support for Saudi Arabia’s brutal invasion of Yemen is finally wavering. This weekend, Washington even suspended airplane refueling assistance, though Mattis insisted that U.S. assistance would continue.

While these moves are long-overdue, the signal Mattis has given that the United States would continue its military involvement, while also now seeking to broker peace, is the wrong approach.

Instead, the United States should do what it should have done from the start: leave.

U.S. support for the Saudi-led military coalition began in 2015, when the Saudis intervened in Yemen’s civil war. This support has included airplane refueling assistance, intelligence sharing, public relations, training and arms sales. And, until now, American support hasn’t faltered—despite international outcry over civilian bombing, weaponization of famine, and the war-induced cholera epidemic. The United States has even deployed its own bombers and troops to the fight.

Even beyond complicity in the slaughter of Yemeni civilians, the United States is also responsible for the growth of Al Qaeda in the Arabian Peninsula (AQAP) in Yemen. According to the International Crisis Group (ICG), the terrorist organization is “stronger than it has ever been” after two years of conflict. This is due partly to lack of pushback from Yemen’s Shia Houthi separatists, who would otherwise fight the Sunni AQAP, are kept busy fighting the U.S.-backed Sunni Saudi coalition. The Saudi coalition, too, has been protecting and recruiting AQAP fighters for the anti-Houthi offensive.

In short, by supporting Saudi Arabia in Yemen, the United States is aiding AQAP—even though combatting AQAP is America’s stated purpose in Yemen, according to a December 2016 presidential brief. The brief justifies America’s “provision of limited support for . . . the Saudi-led coalition” by vaguely referencing “certain statutory authorities” and the president’s commander-in-chief power. Whatever that implies, it does not justify any strategy which inflates AQAP’s strength and wealth.

The United States could have avoided complicity in Yemen’s slaughter and AQAP’s rise by avoiding Yemen altogether. If the United States had pulled out sooner, then the Saudis would have suffered the full weight of international condemnation, potentially sparking the very negotiations U.S. officials are now seeking.

But the United States did not want to leave Yemen because leaders feel compelled to counter Iran’s influence and support Saudi Arabia.

The Houthi rebels are considered, at least by the Saudis, to be an Iranian client, like Hezbollah in Lebanon. Since 1979, U.S. analysts have considered Iran to be uniquely destabilizing, anti-Western, and a sponsor of terrorism. American strategists have grown increasingly wary of Iranian influence in Lebanon, Iraq and Syria over the past two decades. Because it’s located at the significant meeting point of the Red Sea and the Gulf of Aden, the idea of losing Yemen to Iran is bound to worry any American defense official.

America’s anti-Iranian tradition has been amplified under the Trump administration. After all, Donald Trump rose to power arguing that the prior administration’s nuclear deal with Iran was the “worst deal ever.” Add to this the fact that U.S. allies Saudi Arabia and Israel are regional rivals against Iran, and the idea of countering Iranian influence among Houthis in Yemen becomes a no-brainer. The administration is now even contemplating designating the Houthis as terrorists.

But this logic assumes a robust Iranian-Houthi alliance. At best, however, they’re allies of convenience against their common Saudi enemy. After all, Iranian support for the Houthis was limited until after Saudi Arabia’s offensive. Further, the group’s religious connection is only skin-deep: Zaydi Shiism, which Houthis practice, diverges significantly from the Twelver Shiism that most Iranians practice.

Having exhausted their justifications, U.S. officials defend their folly in Yemen with increasing irrationality. Despite the carnage of Saudi strikes, the Pentagon has maintained that U.S. involvement “helps reduce civilian casualties.” In June, Britain and the United States vetoed a United Nations attempt to protect a seaport critical to 8.4 million starving Yemenis from Saudi attack. In September, Secretary of State Pompeo wrongfully certified that the Saudis were limiting civilian damage, thereby bypassing congressional limits on U.S. military aid. If the catastrophe of war weren’t enough to sway the U.S. defense establishment, perhaps the fever pitch over Saudi Arabia’s recent murder of Washington Post journalist Jamal Khashoggi, a U.S. resident with three children who are U.S. citizens, would do it. Yet even then, President Trump still defended weapons sales to Saudi Arabia.

Washington’s recent calls for peace may mean, after having been obstinate for so long, officials now see more promise influencing the regional balance of power through diplomacy rather than military force. If the United States would recognize that withdrawing support long ago could have spared Yemen years of disaster, it could learn a valuable lesson. Instead of embroiling itself any further and risking more unintended consequences, the United States should cut its losses and leave Yemen once and for all.

Michael Zigismund is an attorney based in New York City and a Young Voices writer. He holds a B.A. from Tufts University in International Relations and Political Science.