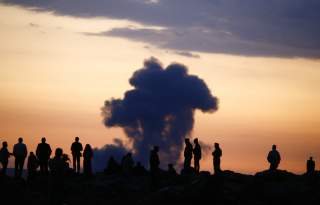 Hawkish factions in Washington tout the Syrian Kurdish forces as a way to block Iran from regaining the “land bridge” through the Middle East that it once had through its alliances in Iraq and Syria. Happy to receive protection from Turkey and the Syrian government, the majority Kurdish-dominated Syrian Democratic Forces (SDF) have long welcomed the support that U.S.-Iranian tensions bring. But now that war with Iran is on the horizon, talk of using northeast Syria as a forward base against Iran is beginning to raise eyebrows with the SDF leadership in Qamishli.

Their unrecognized Kurdish-led statelet in northeast Syria has been America’s best friend in the war against ISIS, and they’re currently keeping the Iranian-backed government of Bashar al-Assad from retaking the entire country. But as tensions in the Persian Gulf ratchet up, it’s not clear whether the Kurds and their allies in the SDF are willing—or able—to be a part of any U.S.-led war against Iran.

As long as the tensions between the United States and Iran stay simmering, it “gives the US an incentive to keep staying in northeast Syria,” said Bassam Ishak, the Syrian Democratic Council’s diplomat in Washington. “We know all along in the northeast that the US sees Syria through the lens of its Iran policy. For us, this is positive, because the US could help us keeping Iran out, Turkey out.“ But an full-on war “is going to be dangerous to everybody,” he warned.

Syria is split along the Euphrates River. The eastern bank is held by the SDF along with two thousand U.S. special forces and an increasing number of troops from the international counter-ISIS coalition. Assad’s government controls the opposite side, with the help of Iranian and Russian forces. Confrontations have been rare, but as the bloody battle between Russian private military contractors and U.S. special forces in Deir ez-Zor Province in February 2017 demonstrates, tensions can escalate quickly.

At a conference in Israel earlier this month, Ambassador James Jeffrey, the U.S. Special Representative for Syria Engagement, spoke of a “maximum pressure” campaign in Syria, referencing the U.S campaign against Iran.

“There is a deep concern within the SDF over the extent to which the United States is looking to use SDF forces as a counter to Iran in Syria,” said Nicholas Heras, who just returned from northeast Syria, where he was attending the International Forum on ISIS. The Center for a New American Security fellow told the National Interest that he “received many questions…from SDF officials about the extent to which the United States could use the SDF against Iran and its proxies, particularly in Deir ez-Zor.”

“They already feel like we let them down when we left Syria, or for the most part left Syria,” said Lt. Col. Daniel L. Davis, referring to U.S. President Donald Trump’s December promise to withdraw from Syria. “From the perspective of the Kurds, we would have to have offered them some kind of major concession, because what benefit would it be to poke Iran, their next door neighbor in the eye, and draw their ire, knowing that when whatever we would do is finished, they're still going to be there?”

“You would basically be taking on something close to permanent animosity from Iran by going against them on our side,” the retired Army officer and Defense Priorities fellow told the National Interest. “Maybe they would do that, but it would have to be some really good prize that we would give them, and I can’t think right now of what they would want that we would be able to provide.”

The Syrian Democratic Council seems to agree. “We don't have the capacity to be a threat to a large country,” Ishak told the National Interest. “Nor do we have the interest! Our interest is to sustain ourselves and to contribute to a political solution so that Syria could become again a stable, peaceful country. We are trying to really fend off both Iran and Turkey.”

Turkey, which accuses the SDF of supporting Kurdish separatists in Turkey, invaded the SDF-held city of Afrin in March 2018. Turkish forces continue to occupy Afrin, and the Turkish government is signalling that it may attack northeast Syria soon.

After the People’s Protection Units (YPG) held off ISIS in a gruelling series of battles in late 2015, the United States began backing the Kurdish rebel group along with its Syriac Christian and Arab allies, collectively known as the SDF. With U.S. and European support, the SDF coalition established a “Self-Administration” to govern former ISIS territories.

According to the Rojava Information Center, a research group based in northeast Syria, ISIS sleeper cell attacks in the SDF-controlled zone reached a high water mark in May, killing seventy-eight people in one month. In a statement to the National Interest, Thomas McClure of the Rojava Information Center claimed that attacks were down 48 percent “following the most widespread SDF-led and [U.S.-led] Coalition-backed raids to date,” but “we are no longer publishing figures on number of deaths due to the difficulty of obtaining accurate figures and inflated ISIS casualty claims.”

Heras told the National Interest that SDF officials worry that some of these attacks may not have been carried out by ISIS, but by pro-Iran elements. “Targeted assassinations and car bombs would be the hallmark of the Syrian security services,” Heras said. A list of attacks provided by the Rojava Information Center counted eight vehicle bombs and twenty-one targeted assassinations in the month of June. A spate of motorcycle bombs spurred the SDF to institute a motorcycle ban in some areas in early July, according to the Syrian Observatory for Human Rights in London.

Whether the attacks were carried out by ISIS or another group, the threat of anything that could “upset the current recovery and stabilization efforts” by the Self-Administration in former ISIS territory has left Washington with “little appetite” to push the SDF into a new confrontation, Heras said.

However, Heras mentioned “elements within the SDF, particularly fighters from Deir ez-Zor who are tied to Saudi Arabia, that would like to take this opportunity to displace Assad and Iranian-backed forces” from the west side of the Euphrates. “The pool of fighters…for such an operation is still small. One dynamic that we should watch moving into the future is whether the Saudis and Emiratis, under their own line of effort, will try to recruit, mobilize, and pay for a Deir ez-Zor based armed group.”

Saudi Arabia, which is opposed to both Turkey and Iran, contributed $100 million to “stabilization” projects in northeast Syria in 2018. Last month, U.S. officials and Saudi minister of state Thamer Sabhan visited local Arab leaders in Deir ez-Zor to encourage them to cooperate with the Self-Administration on post-ISIS governance.

Ishak denied the “rumors” that Saudi Arabia is building up a separate anti-Iran tribal force in Deir ez-Zor, saying that he “personally doubts” it.

The U.S.-led coalition has a smaller presence outside of the SDF-controlled zone on the Syria-Jordan border, west of the Euphrates River. Lebanese media reported last week that the U.S. forces there are “reactivating” the southern rebel group Commandos of the Revolution, which could serve as an alternative to the SDF in a counter-Iran campaign.

Indeed, the U.S. “maximum pressure” campaign could unintentionally put the SDF on the defensive. U.S. economic sanctions on Iran and European Union sanctions on Assad’s government are converging to create a crisis of fuel shortages in western Syria. Two weeks ago, British forces seized an Iranian oil tanker passing through Gibraltar. Britain claims that the tanker was bringing oil to Syria.

While the Self-Administration governs only a small percentage of Syria’s population, the SDF controls the country’s largest oil field, which was once a major source of revenue for ISIS. Faced with shortages, government forces may look for an opportunity to seize back the crucial resource. Earlier this month, the Self-Administration was forced to deny allegations by a Lebanese newspaper that it was handing over oil fields to Israelis.

“In my discussions with senior officials in both the SDF and the YPG, there is a concern that should the United States escalate against Iran, that Iran would try to use its presence in Deir ez-Zor, and also the regime's presence in the city of Qamishli…to increase attacks against SDF and [U.S.-led] Coalition forces,” Heras said.

“We have tried from the very beginning to do whatever we can to keep us out of the armed conflict. We only fought ISIS because ISIS was attacking our region,” Ishak said. “We never wanted to be involved in any regional war, even any Syrian war. Our interest was just to protect the areas and regions where our people live.”