U.S. Sanctions Will Not Stop Turkey's Shift Towards Russia 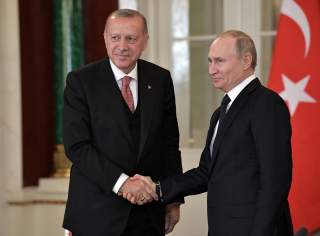 The political crisis resulting from Turkey’s purchase of the Russian S-400 air defense system has profoundly damaged U.S.-Turkish relations, and things could soon get worse. Turkey flouted U.S. threats of sanctions and an end to F-35 sales to acquire the system, and Washington responded by freezing Turkey out of the F-35 program. Now, Congress is pushing for the administration to execute legally mandated U.S. sanctions on Turkey—a step that might permanently damage relations with a NATO ally.

Turkey’s refusal to cancel the purchase is the latest in a long line of U.S. sanctions failures. Many policymakers view sanctions as an antiseptic solution to political disputes, but sanctions rarely work when a target’s core national interests are at stake. Instead, punitive sanctions often sour relations and cause target states to double down on their recalcitrance.

The United States has legitimate concerns about the S-400: The system is not interoperable with NATO’s air defense network, and it could help Russia track F-35s in Turkish airspace and discover their vulnerabilities. Additionally, the prospect of a NATO member developing a closer strategic partnership with Russia raises questions about its commitment to the alliance. There is also an interest in securing the sale for America’s defense industry, which has been a priority for the Trump administration.

Washington applied intense pressure to persuade Turkey to cancel the deal. In a rare op-ed in The New York Times, a bipartisan group of leading senators threatened sanctions that would “hit Turkey’s economy hard—rattling international markets, [and] scaring away foreign direct investment.” Under the 2017 Countering America’s Adversaries Through Sanctions Act (CAATSA), sanctions are mandatory for any nation engaged in a large arms deal with Russia, with the president being required to choose five from among twelve different types of sanction. The administration could soften the blow by targeting mostly military-related firms, but any sanctions will likely spook markets and hurt growth.

Turkey can ill afford new sanctions right now. It’s currency, the lira, has plummeted nearly 40 percent over the past two years; its economy has been contracting; and a long recession appears to lie ahead. Previous U.S. sanctions over detained American pastor Andrew Brunson—though relatively modest—proved damaging to the Turkish economy. Turkey is also being sanctioned by the European Union over a dispute involving energy rights in Cyprus.

For the Turks, however, the S-400 satisfies several important needs—it is substantially cheaper than the U.S.-made Patriot and offers a more comprehensive air defense, excelling at targeting both missiles and aircraft. Unlike the Patriot, it is also designed to combat the Western aircraft that populate Turkey’s own air force, an important consideration for a government still reeling from the attempted coup in 2016 in which Turkish Air Force pilots bombed both parliament and the presidential palace.

Despite Turkey’s economic troubles, the threat of sanctions did not dissuade it from its acquisition. That fits a pattern of defiance common for nations sanctioned over what they perceive to be core interests.  Stiff sanctions that damaged Russia’s economy following the 2014 takeover of Crimea failed to lead Russia to return the peninsula and end its support for separatists in Eastern Ukraine. Similarly, Iran has been unwilling to make concessions on its missile program or support of proxies despite crushing sanctions that are expected to shrink its GDP by 6 percent this year. And the Nord Stream 2 pipeline connecting Germany and Russia appears to be moving forward despite U.S. threats to sanction the companies involved.

Even in what is generally considered the textbook case for sanctions success—the UN sanctions that prompted Iran to negotiate the 2015 nuclear deal—the economic pain that brought Iran to the table was due at least as much to a global slump in oil prices and economic mismanagement as the sanctions themselves. There is also good reason to believe Iran was never fully committed to acquiring a nuclear weapon.

What sanctions often do achieve is angering the target nation and making a diplomatic resolution more difficult. Decades of sanctions on states like North Korea, Cuba, and Saddam’s Iraq did not made them more conciliatory, but froze their relationship with the United States in a state of hostility. The acrimony from the Crimea sanctions created the longest downturn in U.S.-Russia relations since the Cold War, contributing to the disintegration of the Intermediate-Range Nuclear Forces Treaty and is now threatening the renewal of the New START Treaty (both important arms control agreements) while achieving no political gains for the U.S.

Removing Turkey from the F-35 program was the appropriate response to the S-400 sale, but targeting the Turkish economy over a military procurement decision is disproportionate—Turkey will certainly view it that way. Implementing sanctions will likely provoke hostility and retaliation while driving Turkey closer to Russia or other U.S. rivals. Turkey has hinted at a response that might include shutting off U.S. access to Incirlik air force base or launching an offensive on U.S.-allied Kurds in Syria.

President Donald Trump has indicated he doesn’t want to impose sanctions, and recently asked senators for “flexibility” on CAATSA-mandated retaliation to try and work out a solution with Turkey. On behalf of the administration, Senator Lindsey Graham (R-SC) has proposed a deal to Turkey that would forego sanctions if the Turks do not active their S-400s. If these overtures fail, then U.S. sanctions will likely be inevitable, and might well irreparably damage an already fraught relationship.

The power of sanctions comes not from their imposition but from the promise of their removal. The U.S. policy apparatus is unfortunately exceedingly slow to remove sanctions once imposed. The United States should instead apply sanctions sparingly, intelligently, in support of a clear diplomatic strategy, and only in situations where the target is not defending a core interest and thus is able to compromise. The dispute with Turkey should provide an impetus to rethink and reform our current approach.