U.S. Should Get Out of the Way of Middle East Cooperation 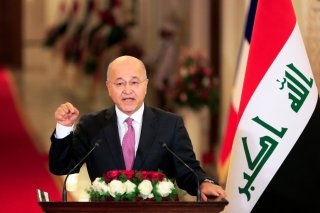 Uncertainty about U.S. commitment to the Middle East may be the best strategy for achieving regional peace and stability. At the very least, it has two of the region’s biggest rivals ready to discuss their issues.

Saudi Arabia and Iran continue to provide clues to possible regional behavior in the absence of U.S. presence. In Baghdad in late September, the two countries met for the first time since the new Iranian president, Ebrahim Raisi, took office. The meeting is the continuation of small but deliberate steps to ease tensions between the two Gulf states.

Saudi Arabia and Iran have been regional rivals for some time. However, the relationship grew cold in 2016 after the kingdom executed top Shiite cleric Nimr al-Nimr which produced protests in front of the Saudi embassy in Tehran. Other events have contributed to the degraded relationship, including the war in Yemen between the Saudi-backed government and the Iranian-backed Houthi resistance which remains a consistent source of contention. Additionally, the 2019 attack on the Abqaiq oil facility, for which Saudi Arabia blames Iran despite the latter’s denial, is unresolved. Furthermore, despite President Donald Trump’s assertion that Iran appeared guilty, his reaction at the time was to say that he was in no rush to respond—signaling to the Saudis that the U.S. commitment to the region was already waning.

The Iran-Saudi relationship began to thaw more quickly when U.S. president Joe Biden signaled an end to unchallenged Saudi support by suspending a weapons sale to the kingdom and United Arab Emirates (UAE), signed by his predecessor, Donald Trump. The administration eventually approved the sale but the message still resonated. The uncertainty of U.S. commitment to the region has only amplified after the withdrawal from Afghanistan, but the ambiguity may be advantageous for U.S. interests.

Numerous rounds of high-level meetings have occurred between Iran and Saudi Arabia since their first meeting in April, including several in Baghdad, one of which took place during a regional summit hosted by Iraq. Additionally, Iran’s Foreign Minister Hossein Amirabdollahian met with other Middle East and North African foreign ministers and senior delegates on the sidelines of the United Nations General Assembly last week, which he referred to as a follow-up to the Baghdad Summit.  The latest development is the open negotiation to reopen consulates in Mashhad and Jeddah as a sign of goodwill in push to end the war in Yemen.

At the seventy-sixth session of the U.N. General Assembly, in a pre-recorded video, the Saudi king announced his support for international efforts to prevent Iran from obtaining nuclear weapons. This stance reverses the long-held opposition to the Joint Comprehensive Plan of Action (JCPOA), otherwise known as the Iran-nuclear deal.

There was often speculation that Saudi Arabia opposed the JCPOA to deny the United States and Iran an avenue for détente. With the United States suddenly considered an unreliable partner, the kingdom must face its neighborhood without the unquestioned U.S. backing. When confronted with that reality, the kingdom has chosen to engage diplomatically with its rival and support a diplomatic solution that prevents a nuclear arms race in the Middle East.

Saudi Arabia isn’t the only nation to embrace diplomacy since the United States revealed its intentions. Egypt, Jordan, and Iraq held trilateral discussions, marking the first time an Egyptian head of state visited Iraq in thirty years. UAE and Turkey met to improve their bitter relationship, which has deteriorated since the two nations backed opposing factions in Libya. Egypt reached out to Qatar to mediate its conflict with Ethiopia regarding the Grand Ethiopian Renaissance Dam, a move that may have been unthinkable before Egypt, Bahrain, Saudi Arabia, and the UAE agreed to end their blockade on Qatar.

The prevailing doomsday thought is that U.S. disengagement from the Middle East will create a power vacuum that the regional powers will move to violently fill. The immediate behavior of those in question provides evidence to the contrary.  When presented with a reality that their next fight may occur without any guarantee of U.S. weapons or unconditional support, the region has chosen diplomacy.

Despite the more prevalent narrative that the U.S. presence in the region promotes security and stability, it appears that U.S. military support and arms sales only encourage fighting. The United States should move to a smaller regional footprint and keep its strategy close to the vest. Much like U.S. policy on Taiwan, U.S. Middle East policy could also benefit from some strategic ambiguity.