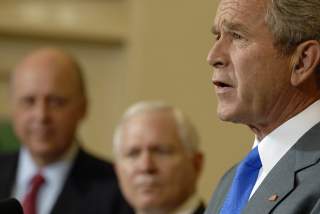 Americans are suckers for a good story about freedom fighters rising up for democracy against a tyrannical government. But before we get fooled again, we ought to take a careful, dispassionate look. Trying to bring about a democratic Iran by force would result in even greater tragedy than the failed two-decades-long efforts in neighboring Iraq.

The claims that a majority of the Iranian people are viscerally opposed to the theocratic regime in power and would welcome American bombs to “liberate” them are worse than overstated; the claims are false. Maj. Gen. Qassim Suleimani is one of the most popular figures in Iran, with 80 percent of Iranian citizens viewing him favorably.

The decision by Donald Trump to kill Suleimani via drone strike only helped Iran quell much of its internal political dissent. Richard Engel of NBC News reported, “young people in Tehran, old people in Tehran, are uniting behind the government.” Veteran Iran journalist Rohollah Faghihi similarly argued that the “formerly divided” Iranian people are “standing firmly behind the government.”

It is a completely predictable outcome when a foreign government kills an official of one’s government and threatens war on one’s homeland—explicitly threatening historical and cultural sites, even.

Not just Iran, the United States is losing Iraq, too.

The United States is not viewed as some beacon of freedom and righteousness in Iran. According to a survey by the School of Public Policy’s Center for International and Security Studies at the University of Maryland released in October 2019, more than 80 percent of Iranian citizens have negative views of the United States. U.S. troops would not be greeted with flowers. They would be viewed as an occupying force that represents a hated adversary.

The scope of the protests and the amount of Iranians participating should not be exaggerated, either. Protests typically attract passionate people, but there is always a group of people, often quiet or receiving little to no attention by the media, that both sympathize with anti-government protesters and seek out fiery content. This group supports the status quo and views the protesters who started fires and disrupted transportation as a nuisance or worse. The up to two hundred thousand people who participated in the protests, according to Iran’s interior minister, represent less than one-half of one percent of Iran’s population.

The small number of Iranians who tweeted the hashtags #IraniansDetestSoleimani and #FreeIran2020, which were spread by American citizens and regime-change activists like Foundation for the Defense of Democracies Chief Executive Mark Dubowitz, were even less representative of the country’s population. Those who are competent and concerned enough to breach Iranian internet controls, open a Twitter account and tweet to Americans in English are going to be younger and more pro-Western/pro-democracy than the average Iranian.

Anyone who points out these truths, however, is accused of being “pro-Iran.” Asra Q. Nomani wrote that Democrats and critics of the rush to war are “sympathetic to Soleimani’s death.” Former Trump administration ambassador to the UN Nikki Haley accused Democrats of “mourning the loss of Soleimani.”

Literally, no examples are cited of any Democrats expressing the slightest approval for Suleimani, a man who has alternatively been denounced as a “murderer” and a “terrorist” by most of the Democratic candidates for president. Cited by Nomani was Obama administration official Ben Rhodes, who simply tweeted that declaring war is Congress’s power. Also cited was the “apology” to the Iranian people by actress and model Rose McGowan, perhaps most well known to mass audiences for her role in the TV series Charmed (2001–06), whom you might notice is not a Democratic politician and is not running for president.

The rhetoric-attacking war skeptics—and the promoting of war—is strikingly similar to that uttered in the run-up to, and during, the Iraq War, when those who opposed the war were accused of being “anti-American” and not “supporting the troops.” The night Iran fired missiles at American military bases killing no one, Fox News was running a minute-by-minute drumbeat with video of dark scenes from Iraq and Sean Hannity hoping for a “massive” response. Mike Pence’s false claim that the Quds Force was linked to 9/11 and that “the world is a safer place today because Soleimani is gone” is a direct reprisal of the old “the world is safer because Saddam is gone” line.

But taking an objective view of the situation, even if it means raining on the optimism and idealism of protesters, is necessary. Because idealism distorts our view of reality. In the real world, lives are on the line. After 5,700 Americans killed, well over 100,000 Iraqis killed, $3 trillion in expenditures, and no democracy in Iraq, we ought to have learned that hope and sloganeering do not change the brutal reality that outside intervention by foreign powers does not bring democracy and peace by themselves. (Iraq scores 32/100 in Freedom House’s ratings, putting it on par with Zimbabwe and Myanmar.)

Like Bush’s old Tennessee and Texas saying goes, if America allows the situation to escalate into a full-on shooting war, ground troops or not, then shame on us.

Mitchell Blatt is an editorial assistant at the National Interest, Chinese-English translator, and lead author of Panda Guides Hong Kong. He has been published in The Korea Times, Silkwinds magazine, and Areo Magazine, among other outlets. Follow him on Facebook at @MitchBlattWriter.