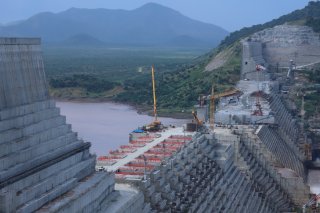 In early September, the United States decided to suspend up to $130 million in aid to Ethiopia over a “lack of progress” in negotiations with Egypt and Sudan on the filling and operation of the Grand Ethiopian Renaissance Dam (GERD). These negotiations have been ongoing for nearly a decade. The United States has close ties to both Egypt and Ethiopia, and it attempted to be a mediator in the dispute this past year. However, Ethiopian representatives have accused the United States of favoring Egypt’s stance, and the parties failed to sign a binding agreement. Negotiations are now being facilitated by the African Union and resumed on September 15.

The U.S. suspension of aid came after Ethiopia began filling the GERD this July. Under different circumstances, it would make sense to punish a party to a negotiation for acting unilaterally before an agreement is reached. In this case, however, a delay in the filling of the dam is strongly to Ethiopia’s developmental detriment—a lopsided outcome.

Punishing Ethiopia for going ahead with the filling is therefore undeserved. Since no parallel suspension of aid was issued to Egypt or Sudan, the move likely strengthens Ethiopian suspicions that the United States favors Egypt’s position in negotiations for managing the Nile’s waters. It is a move that will likely not contribute to the dispute’s resolution, but instead, anchor the parties in incompatible positions. By not remaining impartial on the issue, the United States has likely jeopardized its chance to be a credible conflict mediator.

Additionally, delays in the filling, which the United States seems to be encouraging with the suspension of aid, could eventually harm all parties—even Egypt. In previous negotiations, the parties have reached a consensus on the filling rate of the dam for the first two years. The filling planned for the first year of 4.9 billion cubic meters (bcm) is relatively small and is intended only to allow for testing the operation of the GERD’s two lower turbines. The second-year requires 13.5 bcm for testing the remaining turbines. The major point of contention in the negotiations has been dealing with drought, but in a February U.S. draft agreement, which Egypt signed and Ethiopia rejected, drought mitigation mechanisms would begin only in the third year. Therefore, there is at least room for a partial agreement for the first two years of filling. Deciding that filling should not begin before the conclusion of all negotiations is much more political than it is consequential for Egypt.

Beginning the filling earlier rather than later is advantageous for Ethiopia, Sudan, and, in the long run, perhaps Egypt as well. While Ethiopia stands to be the prime beneficiary of the GERD, Sudan also stands to benefit from the dam’s eventual electricity supply and flood management capabilities. Every year that the GERD does not operate, those benefits are lost.

The stress on water resources in the Nile River Basin is only going to increase, which is another reason for all parties, Egypt included, to fill the dam sooner rather than later. Demographic growth in the Nile river basin will increase demand for water, while climate change poses a serious risk of decreasing water availability in the region. The earlier the filling of the GERD is complete, the earlier its benefits will be gained, and the lesser the risk of encountering serious water scarcity that could lead to further conflict. Filling should take place while there is still surplus water to spare in the region. The Blue Nile flow reaches its annual peak in July and August—a good time to fill in a non-drought year.

While the U.S. decision to cut aid is not insignificant for a low-income country like Ethiopia, it is unlikely to soften Ethiopia’s stance on the GERD dispute. For Ethiopia, the GERD has become a matter of national pride. International banks and Western countries shied away from financing it due to Egypt’s assumed veto on upstream water projects on the Nile. The $4.8 billion dam’s financing has therefore relied primarily on Ethiopian bonds and tax revenue as well as significant contributions from the Chinese government. The unilateral decision to build, fill, and eventually operate the dam has been framed by Ethiopians as their sovereign right. The dam is expected to generate enough power to supply half of Ethiopia’s current electricity needs and to export electricity to neighboring countries, including Sudan. In short, the GERD is a tremendous economic development opportunity for a country that ranks a meager 173rd on the Human Development Index.

Be that as it may, one can easily sympathize with Egypt’s natural concerns. The Nile's waters are a lifeline for Egypt’s nearly 100 million people, 30 percent of whom work in agriculture. It supplies 90 percent of Egypt’s water, with little to spare. In a 1959 bilateral treaty, Egypt and Sudan divided the Nile’s annual water flow such that 55.5 bcm are allocated to Egypt and 18.5 bcm are allocated to Sudan, although Sudan usually uses only 12-14 bcm. The agreement also gave Egypt veto power over upstream Nile projects, but Ethiopia and other upstream countries were not included or taken into consideration. Egypt wants to prevent any upstream water projects that could affect its scarce water supply and its promised 55.5 bcm. 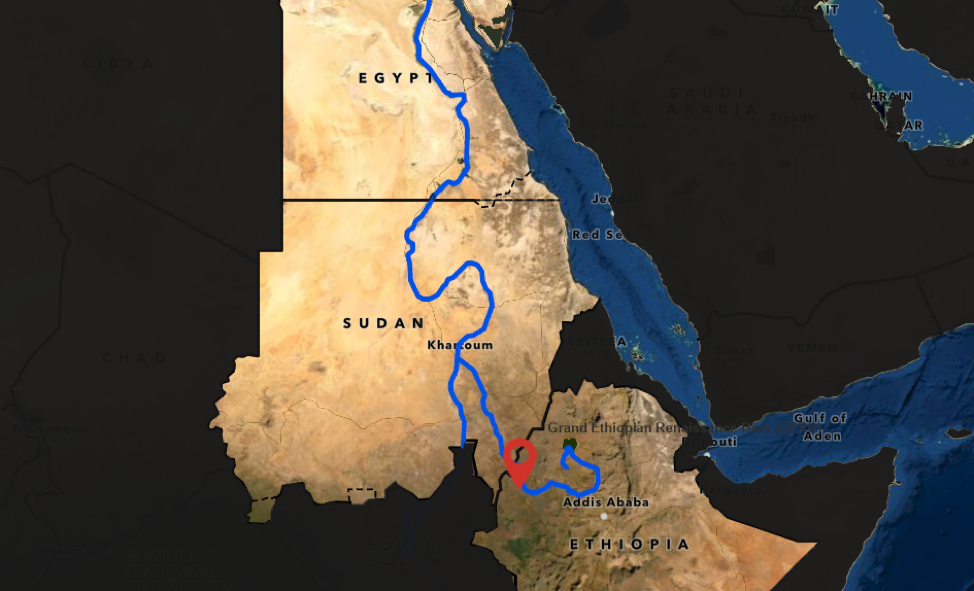 Location of the Grand Ethiopian Renaissance Dam, courtesy of the Center for Development and Strategy.

Furthermore, Egypt does not trust Ethiopia. Ethiopia’s nationalistic rhetoric about exercising sovereign rights over its natural resources creates a confrontional dynamic that would result in an unfriendly neighbor controlling Egypt’s most important natural resource. Why take the risk of being at another’s whim? Without a binding agreement that promises to put its water needs first, Egypt has no incentive to let the GERD project go through. Demanding conditions to the agreement that Ethiopia will not accept may in itself be a tactic to delay or block progress with the dam.

Historically, upstream countries have used water to become more powerful, while downstream countries have used power to protect their water sources. If an agreement is not made for the long-term, conflict over the Nile’s waters could escalate down the road. Both sides have already used cyberattacks and there is potential for other types of hybrid warfare to occur if the conflict becomes more severe. That may include using non-state actors or even direct military intervention, as Egyptian President Abdel Fattah al-Sisi has hinted before he later retracted those comments. However, suggestions that this conflict may lead to an outright water war are still overly alarmist at this early stage. If Egypt can block water projects upstream by pulling political levers, it will.

Whether or not the tripartite negotiations will reach an agreement on the filling and regular operation of the GERD, the real test will come when the region experiences drought or reduced rainfall. Will Ethiopia consider the water needs of downstream countries? If Ethiopia acts responsibly, it will help form trust between the three countries, and a norm for the responsible operation of the GERD could ensue. In contrast, trust is not built by applying leverage and bending hands, which often seems to be U.S. President Donald Trump’s deal-making strategy. A forced agreement is unlikely to be sustainable.

Negotiations about the GERD highlight a more fundamental and long-term issue: in the not-too-distant future, the Nile’s waters are not going to be enough for all in its basin. How will the Nile countries divide the waters between them when the demand for water is higher due to increased population and the supply is lower due to climate change? To resolve water disputes in a fair and smart manner, the Nile countries will have to act as a single unit rather than separate advocates of national interest.

Yaniv Cohen is an Environmental Security Analyst with the Center for Development and Strategy in Washington, D.C. He is currently pursuing a Master’s in International Relations and Economics from the Johns Hopkins School of Advanced International Studies and holds a B.A. in Peace and Conflict Studies from the University of California, Berkeley. Originally from Israel, Yaniv is a veteran of Givati’s Reconnaissance Unit in the Israel Defense Forces.

David Harary is the Board Chair of the Center for Development and Strategy in Washington, D.C. He holds an M.Sc. in Sustainability Management from the University of Toronto and has experience working on environmental monitoring satellite programs at NASA, the National Oceanic and Atmospheric Administration, and the Department of Defense. The author is responsible for his own content. All opinions are those of the author and do not reflect the official positions of the U.S. Department of Defense or any other entity subordinate to or affiliated with the U.S. Government.