A Way to Ensure the Disruption of the Islamic State: Bring ISIS Children Home 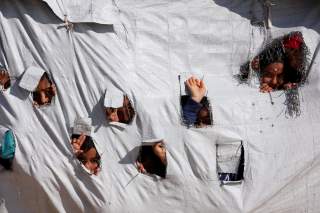 It is time the international community dealt with the uncomfortable consequences left behind from the migration of foreign fighters from all over the world to join the ISIS—children stranded in the post-Caliphate spaces need to go home. If we allow children of ISIS to remain in detention camps, then we only risk raising them as the next generation of ISIS fighters. Before it is too late, they need to be repatriated to their home countries.

And yet, there is much resistance to bringing ISIS children home. While countries including France, Germany, and Norway have repatriated the children of foreign fighters from Syria and Iraq, others remain reticent. In November, UK Home Secretary Priti Patel blocked a ready rescue operation to bring back more than sixty minors from Syria. Around the same time in the United States, a federal judge ruled that American-born Hoda Muthana who had joined ISIS was not an American citizen, effectively barring return to the United States to her and her two-year-old son.

Officials often cite security concerns to justify reservations about bringing ISIS children back. “These children have been raised with different values and norms than our children. We don’t have to be silly about that. They’ve seen the cruelest things in the world,” one Belgian official explained. However, leaving these children to their own fate in Syria and Iraq is not a way to more security. It is a way to ensure ISIS has hundreds of disenchanted and forgotten children to turn into its future fighters.

ISIS has already demonstrated that it is not above using minors in its gruesome plans. The group’s so-called Cubs of the Caliphate unit prepared children for combat roles, including front-line operations and suicide attacks. In the heydays of the Caliphate, children were continuously subjected to violence and were forced to witness public beheadings, stonings, and executions. They featured in the group’s chilling propaganda videos. ISIS leaders used young “jihadi juniors” to spread their message. In one case, it was a four-year-old British boy who was filmed promising deaths for unbelievers.

The terror group’s use of children has not been limited to the lands of the Caliphate. In Europe, ISIS has successfully deployed children as terrorist agents. For instance, in Germany, a fifteen-year-old ISIS supporter managed to stab a police officer in Hanover on February 26, 2016. The girl apparently received orders for the attack from ISIS over the internet. In another case, also in Germany, in the town of Ludwigshafen, a twelve-year-old German-Iraqi boy attempted to bomb a Christmas market in December 2016. ISIS operatives sent him the instructions over Telegram.

It would be naïve to expect that if left to grow up in detention camps ISIS children will not follow suit. More than eleven thousand foreign women and children remain trapped in Syria’s al-Hol camp. Many others are scattered across facilities in northern Syria. Most require urgent medical and psychological care. In camps like al-Hol, children hardly receive proper nutrition, let alone counseling services to address trauma and PTSD.

What they do receive are ongoing doses on indoctrination. In some camps, ISIS women have successfully recreated a terror-filled regime emulating the rule of the Caliphate. This means that in detention children remain vulnerable to radicalization spread by female ISIS hardliners. Not surprisingly, a child was filmed in al-Hol repeating ISIS promises. “God willing, one day you will go through this,” the child said. “A day you will be imprisoned like this. God willing. One day, you will go through what we are going through. God willing. We will imprison you one day. Don’t think that the [Islamic] state is over.”

The faster children get extricated from detention camp environments, the sooner they will break out of the cycles of radicalization. Al-Baghdadi envisioned children as “the next generation of the caliphate.” In order to prevent the realization of his vision, governments around the world need to bring ISIS children home and invest in their future.

Elena Pokalova, PhD, is an Associate Professor at the College of International Security Affairs, National Defense University in Washington, DC, and author of Returning Islamist Foreign Fighters: Threats and Challenges to the West. The views expressed in the article are her own.