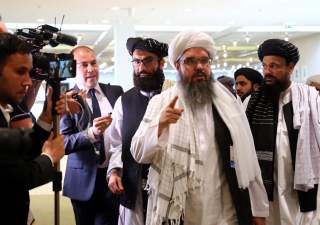 On February 29, after the completion of a seven-day violence reduction period, U.S. and Taliban negotiators signed a troop withdrawal deal that was meant to usher in an intra-Afghan dialogue. The intra-Afghan dialogue is supposed to launch a peace process that results in a power-sharing deal that ends a U.S.-led war that has raged for nearly nineteen years.

There are many uncertainties and challenges associated with an intra-Afghan dialogue: Will the Afghan political class, riven by divides that have been further exacerbated by a contested presidential election result, be able to present a common front in negotiations with the Taliban? Will the Taliban actually agree to negotiate a power-sharing deal within a political system that it has long rejected and vowed to overthrow by force?

Another fundamental question, down the road, is whether the negotiating parties will be able to agree to a plan to reintegrate Taliban fighters back into society. To put it simply: If there is no incentive for the Taliban to stop fighting and reenter society, then there won’t be peace.

Here, history can be a useful guide. The negotiations that led to the end of a long-running insurgency in Colombia have often been cited as a useful analogue for Afghanistan. In 2017, Micheal Kugelman coauthored a commentary with Latin America analyst Jamie Shenk that laid out the broader similarities between the two conflicts—from insurgencies that enjoyed cross-border sanctuaries and were funded by the drug trade, to the heavy support of the United States for the governments fighting the insurgents.

However, the issue of reintegration is particularly instructive because its successes and failures in the Colombia case are highly salient for Afghanistan, as the country edges closer to launching a peace process.

The conflict between the Revolutionary Armed Forces of Colombia (FARC) and the Colombian government ended in June 2016 with a peace deal. Bogota agreed to set up twenty-three “transitory rural settlement normalization zones” and eight “transitory normalization points.” These areas were used to disarm and reintegrate FARC fighters. The camps there provided the ex-fighters with proper housing and an opportunity to build healthier and nonviolent lives.

This arrangement, by some measures, attained a fair degree of success. According to a study published in 2019, only 8 percent of tracked guerrillas have gone unaccounted for under this reintegration arrangement. However, in recent months, Colombian president Iván Duque has been trying to back out of key provisions, as he ran his presidential campaign on vocally opposing the deal. In addition, some ex-guerrillas have become frustrated and disillusioned with the deal as funding and support from the government for the peace accords have slowed. The Colombian peace deal remains in place but it is in jeopardy of falling apart.

The Colombian government’s peace plan entailed having guerrillas put down their arms, end their war against the government, restore security, and reintegrate fighters back into society. The deal has some similarities to the proposed intra-Afghan dialogue, which seeks to end the armed conflict in Afghanistan, improve the security situation, and eventually reintegrate ex-Taliban fighters back into Afghan society.

There are, to be sure, key differences between the Afghanistan and Colombia cases. The FARC negotiations did not include a foreign superpower, nor did the war in Colombia include an invasion by a foreign superpower. Rather, these negotiations were directly between the FARC and the Colombian government. The Afghanistan negotiations, on the insistence of the Taliban and to the frustration of Kabul, have to this point involved only the United States and the Taliban.

At any rate, while there are key differences between the two cases, there are still crucial lessons that the American and Afghan governments should take away from the Colombia-FARC conflict regarding the reintegration of ex-militants.

Consider the aforementioned disarmament and reintegration zones, or camps, for ex-FARC fighters. These areas allowed the Colombian government to monitor ex-fighters and offer educational and training sessions. In addition, once fighters moved into these zones, the FARC agreed to provide the government with a list of all their members there, and arrest warrants were suspended for FARC members to allow for reintegration. This created a controlled environment for the fighters and provided the government with the ability to track ex-militants inside these zones.

As noted earlier, a Colombian think tank, the Bogota Ideas for Peace Foundation, found in 2019 that only 8 percent of ex-FARC fighters had gone unaccounted for—that is, these 8 percent had never been tracked by the government, their whereabouts were unknown, and they had presumably never entered the camps.

This is an impressive accomplishment given the size—around seven thousand fighters at the time of the peace deal—and influence of the FARC. The disarmament and reintegration camps can be used as a model for future Taliban reintegration, as they have provided a controlled space for the government to monitor ex-fighters and aid them in the reintegration process. During a postwar rebuilding period, it is crucial to track ex-militants and ensure their reintegration back into society.

Another success story from these Colombia disarmament/reintegration camps was their ability to provide proper housing for ex-FARC militants. While fighting in the countryside of Colombia, militants typically slept in tents and had unpredictable lifestyles. However, the postwar zones provided them with roofs over their heads and the opportunity to live a predictable, healthier life. In addition to this, they allowed the fighters to have children and start families. While in the FARC, women were forced to have abortions and members were banned from raising children. The improved lifestyle in the disarmament/reintegration zones attracted many ex-fighters, which in turn allowed them to return to a normal life.

The implication here for Afghanistan is simple: If the life for ex-Taliban fighters offered by the government post-peace deal is worse than the one during the war, then militants are drastically less likely to join the reintegration process. However, if the government can offer an improved quality of life, then those fighters are more likely to join the reintegration effort. If the Afghan government is unable to offer a better life for Taliban fighters following a peace agreement, then what is going to attract fighters to join and follow through with the reintegration process? This is a key question that both the U.S. and Afghanistan must consider in the coming months.

While the Colombian peace process has had successes, there are also failures that are instructive for the Afghanistan case. In the past year, numerous ex-fighters have become disillusioned with the peace process and have claimed that the Colombian government is not following through on its commitments to reintegration. This includes a fear of lack of job opportunities and of the government not providing proper housing or medical facilities in the camps. Due to these concerns, many have left the camps to find a better life elsewhere. The United Nations calculated in 2017 that more than 55 percent of all FARC members had left the reintegration camps. While many will be likely left to return to their families or search for a job, it is feared that some rejoined dissident factions of the FARC or other armed groups as there isn’t enough motivation to stay in the camps and remain in the reintegration process.

On top of this, Duque has been trying to back out of key provisions of the agreement, including a veto of a statutory law that governs special tribunals that have been set up to hear the cases of millions of victims of Colombia’s civil war. Additionally, Duque has refused to implement nearly one-third of 578 provisions from the peace deal that has yet to be ratified. This is due to Duque campaigning on his opposition to the FARC peace deal, as he feels that the deal is too lenient on former FARC guerrillas and that it should be “renegotiated.” Under the 2016 deal, FARC militants could avoid jail time for their war crimes if they agreed to lay down their weapons and enter reintegration. In addition, FARC members were allowed to again participate in Colombia’s political process, and the FARC relaunched their political party in August 2017. Duque and his party have voiced strong opposition to these portions of the agreement.

Duque’s administration has left budgets underfunded for the reintegration camps. The National Reincorporation Council, the body created by the accord to decide on and oversee long-term reintegration activities, has only approved funding for one out of a total of four cooperative business projects for the former guerrillas. Critics also believe that the Duque government is undercutting reforms by not providing relevant reintegration agencies with sufficient funding. In doing this, it is a way for Duque and his government to continue to undercut the Colombian reintegration and peace process.