What is Behind Pakistan's Recent Civil-Military Spat? 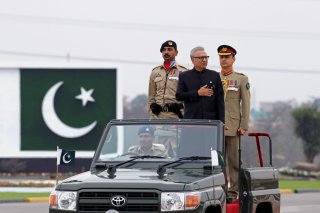 Following the Pakistani joint opposition’s multi-party conference on September 20, which also featured the Pakistan Muslim League (N), PML-N, chief Nawaz Sharif’s hard-hitting speech against the military, civil-military tensions have come to a head again. After a year-long silence, Sharif came out all guns blazing against the military, labeling it “state above the state.” His speech has triggered a national debate on the future course of Pakistani politics.

While firing salvos at the military, Sharif side-stepped the incumbent Prime Minister Imran Khan, maintaining his real fight is against the former for rigging the 2018 election to bring Khan to power. Sharif also blames the military for his lifetime disqualification by Pakistan’s Supreme Court over corruption charges.

In retaliation, the army’s spokesman Major General Babar Iftikhar has disclosed two meetings of Sharif's emissary and the PML-N leader Muhamad Zubair with the army chief General Qamar Javed Bajwa pertaining to the former’s political and legal matters. Both meetings took place on Zubair’s request, who has acknowledged meeting Gen. Bajwa, but denied requesting relief for Sharif or his daughter and heir-apparent Maryam Nawaz. Though the disclosure of these meetings has seriously dented the PML-N’s political narrative, it has exposed the military’s continued interference in politics as well.

For some, Sharif’s anti-military bravado will do more harm than good to the cause of civilian supremacy in Pakistan. Some within the PML-N, including his younger brother Shahbaz Sharif, oppose confrontation with the military establishment. In any case, the opposition’s multi-party conference has announced a two-phased action plan of countrywide protests and public rallies, culminating in a long march towards Islamabad in January next year to oust the Pakistan Tehreek-e-Insaf (PTI) government. Pakistan’s Senate elections are due in March next year. If the opposition fails to dislodge PTI by then, the latter will gain the majority in the Senate, further consolidating its grip on power.

The revelations of the PML-N’s secret meetings with the army chief would shake the party’s hardcore voter base, which supported the narrative of civilian supremacy. The PML-N, despite maintaining its organizational coherence, is a divided house. Twice, some PML-N leaders, during the no-confidence motion against the Senate Chairman Sadiq Sanjrani in August last year and more recently in the FATF-related anti-money laundering bills, have voted against party guidelines or abstained from voting.

Separately, a meeting between the army chief and parliamentary leaders of opposition parties has also come to the fore. These disclosures have virtually put a dampener on the joint opposition’s recent huddle and the loud anti-military rhetoric.

Some political analysts view Sharif’s provocative speech as an act of desperation and the last-ditch effort to save his political career. In doing so, even if he fails, he will go down in Pakistan’s turbulent constitutional history as a democrat alongside Zulfiqar Bhutto and his daughter Benazir. Contrarily, others think that he has committed political suicide by taking the powerful military establishment head-on. Historically, political leaders, notwithstanding their stature, who defied the military such as Fatima Jinnah, sister of Pakistan’s founding father Muhammad Ali Jinnah, Khan Abdul Wali Khan of the National Awami Party, or the Muttahida Qaumi Movement’s founder Altaf Hussain only nominally succeeded. Sharif’s fate won’t be any different.

In a way, Sharif has done a political favor to the embattled PTI government by openly confronting the military. Knowing the content of Sharif’s speech, Khan allowed it on mainstream news channels to create more political space for himself. Despite being in power for two years and enjoying unconditional support from the military, the PTI government has performed poorly. Due to growing public unrest over massive unemployment, poverty, and rising inflation, the military establishment gave the PTI government a six-month deadline to get its act together. Before this speech, if there was any room for the Sharif-military rapprochement, it has been closed. Despite the perfunctory performance, PTI would remain the military establishment’s preferred choice due to the lack of viable alternative: a narrative that PTI sells quite openly. After this development, the PML-N’s moderate segments, which are opposed to open confrontation with the military, might rethink their future political trajectories to save their political careers.

Undoubtedly,  the PTI government’s weakness has disproportionately enhanced the military’s role in the political and socio-economic spheres in a reversal of the 2007 back-to-the barracks policy of then army chief General Ashfaq Pervez Kayani. From controlling media to managing the China-Pakistan Economic Corridor (CPEC) and running foreign policy to holding meetings with businessmen and investors, the opposition is right that the military is running a parallel government under a civilian façade to the detriment of democracy. Khan’s three-year extension to Bajwa in August last year made it all the more evident that he was entirely dependent on the military to continue in office.

More broadly, the recent civil-military upheaval in Pakistan underscores the continuation of old-power politics in Pakistan’s qualitatively changed political environment. The old political guard, which is the principal beneficiary of patronage and dynastic politics, is trying to hang on without democratizing internal party structures, incorporating young blood, and introducing people-centric policies. Simultaneously, the military establishment is propping up pliable political favorites in a diverse and multi-party system to safeguard its institutional perks and privileges, while suppressing the opposition on trumped-up graft charges. These two factors combined are breeding political resentment, blame games, and instability.

Pakistan is headed for a turbulent political period and instability. Though the opposition’s political movement might not dislodge the PTI government, it will weaken it further. By extension, it will also expose the military’s continued interference in politics. The downward spiral of political witch-hunting and mutual recrimination would keep Pakistan hostage to outdated power politics in a transformed political environment. A new dialogue among the key stakeholders is needed to create a new national consensus based on the rule of law, fair game, and equity.

Abdul Basit is a research fellow at the S. Rajaratnam School of International Studies (RSIS), Singapore. He tweets @basitresearcher.