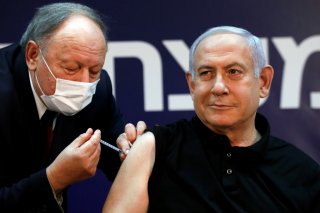 What do critics of Israel’s recent normalization agreements with Arab countries in North Africa and the Middle East have in common with critics of Israel’s initial distribution of COVID-19 vaccines? They both rob the Palestinian Authority of any agency over its own people.

Opponents of Israel’s recent normalization agreements claim that any meaningful peace agreement must not exclude Palestinian representation—a ridiculous, strawman argument that imposes a clear double standard on the Jewish state. The expectation that the State of Israel should make geostrategic decisions based on the interest of both Israelis and Palestinians is absurd and inconsistent with the manner in which states engage in international relations.

More importantly, this argument dismisses the authority that Palestinian leaders have if they were to choose to make peace with the Jewish state. After all, it was Palestinian delegations that directly negotiated with their Israeli counterparts in what resulted as two peace offers  in 2001 and 2008. Palestinian presidents Yasser Arafat and Mahmoud Abbas had the authority and legitimacy to have accepted them and instead, chose to remain on the path of rejectionism. States are indebted to their own constituency and the lack of true Palestinian representation should be attributed to the Palestinian Authority’s refusal to hold free and fair elections during the last 15 years—not Israel.

However, criticism of Palestinian leaders is not in line with the philosophy that depends on the victimization of Palestinians in order to demonize the Jewish state. If such was the case, the Palestinian Authority would be demonized for outlawing homosexuality, for making the sale of land to Jews a crime punishable by death, and for funding an education system based on antisemitic indoctrination.

Recent headlines by the Washington Post, PBS, and Al Jazeera exemplify the main and flawed criticism surrounding Israel’s upcoming campaign to roll out coronavirus vaccinations. The critique is based on the belief that the State of Israel must assume responsibility over the funding, transportation, and distribution of the COVID-19 vaccination for the Palestinian people. Ignoring the statements by a senior official within the Palestinian Authority’s Ministry of Health, who explained that the Palestinian Authority was able to secure the vaccines from other sources in cooperation with the World Health Organization, critics of Israel’s upcoming campaign to distribute vaccines to its own population are again—and conveniently—robbing the Palestinian Authority of its agency and obligation to serve its own people.

The 1994 Agreement on Preparatory Transfer of Powers and Responsibilities was signed between the Israeli government and Palestine Liberation Organization (PLO).  Working towards finalizing the Oslo II Accords, which sought to create Areas A, B, and C in the West Bank as a means of granting the Palestinian Authority a greater degree of autonomy, the Agreement allowed for the transfer of self-government to the Palestinian Authority in limited spheres such as culture, social welfare, direct taxation, tourism, education, and health. In other words, Israel is not responsible for Palestinian access to vaccinations in the West Bank.

The Palestinian Authority’s campaign to vaccinate its people will undoubtedly meet many challenges, including funding and reliance on an effective bureaucratic system—both of which could have been alleviated if the Palestinian Authority would have chosen to allocate the hundreds of millions of dollars in foreign aid it's received over the years to develop its own civil society rather than constructing an intricate infrastructure of terrorism.

Anti-Israel activism is inherently dependent on whitewashing the crimes of Palestinian leaders against their own population while simultaneously victimizing Palestinian leaders to a point where they lack any agency. As a consequence, the Palestinian Authority is allowed to continue its ritual violation of universal human rights against its own people while enjoying the benefits of victimhood that anti-Israel activists work so zealously to portray.

Ultimately, this will only serve to harm the Palestinian people. Those who seek to demonize the Jewish state because they are either guided by a broken moral compass or seek to masquerade their own antisemitism as “legitimate political criticism,” are responsible for the perpetuation of this nearly century-old conflict.

A just and durable solution to the conflict will only arrive when the international community, decides to recognize the authority and power that the Palestinian leadership wields and how it can be used to change the existing status-quo. Such a change may provide the Palestinian people with a future they deserve, rather than the one being paved by a corrupt and disconnected tyrannical regime.