What Khaled Al-Meshri Thinks About the Future of Libya 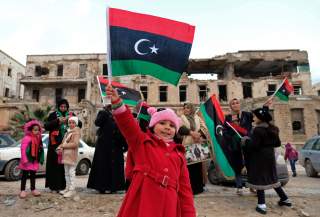 Eight years after the start of the Arab Spring, the full impact of this upheaval on the region remains unclear. Many countries whose citizens rose up against authoritarian governments faced significant resistance, while those who were lucky enough to successfully depose these regimes were left scrambling to construct order from the chaos left behind. One such nation is Libya, which has struggled to create unifying, durable democratic institutions after decades of civil society rot under strongman Muammar Gaddafi.

Khaled Al-Meshri, President of the High Council of State of Libya, spoke at length about the challenges facing Libya’s fledgling democracy at a luncheon hosted by the Center for the National Interest on February 8. He was joined by a delegation of government officials who have traveled to the United States hoping to educate American policymakers and academics about the problems facing Libya and to promote opportunities for international cooperation to constructively address those problems. Since April 2018 Al-Meshri has chaired the High Council of State, a body which advises and counsels Libya’s legislature, and exercises significant power in influencing government appointments. Al-Meshri has been working towards a constitutional referendum in Libya.

Al-Meshri expressed significant optimism about Libya’s future despite acknowledging the large structural challenges facing his country. The top priority, according to Al-Meshri, is the creation of a single, unified government which operates with the consent of the Libyan people under the auspices of a democratic constitution. Al-Meshri stated that the greatest trial currently facing Libya is not the division of authority between national and local government or the challenge of equitably dividing Libya’s abundant natural resources, but rather the competition between two federal entities for control over the central government. Al-Meshri spoke of the difficulties resulting from the break between the United Nations-backed Government of National Accord (GNA) and Libya’s House of Representatives (HOR), a legislative body seated in the city of Tobruk that rejects Tripoli’s authority to govern the divided country.

The High Council of State must also grapple with would-be strongman General Khalifa Haftar and his Libyan National Army (LNA) which is aligned with the House of Representatives and has been active in the east and south of Libya. The GNA is also challenged by various militias and extremist groups which attempt to operate outside the purview of Tripoli’s control. However, Al-Meshri spoke very little about Haftar during the discussion, instead focusing more broadly on the need for reconciliation between Tripoli and Tobruk and the challenges facing western Libya.

On the subject of these rival armies, Al-Meshri expressed disappointment that the Tobruk government had rejected his overtures for dialogue. However, he remained optimistic that, despite lingering tensions, both sides are now convinced of the need to put an end to violence. Al-Meshri even expressed some optimism in the prospects for eventual reconciliation with the various militia groups. To Al-Meshri, these groups exist because of the weakness of the central government. They desire legitimacy and an opportunity to play a role in the state of Libya, creating a potential opening for them to be consolidated in a broader Libyan army.

Still, Libya faces numerous security concerns that will persist even if broad reconciliation does occur. Al-Meshri discussed the persistent presence of terror groups such as ISIS and Al Qaeda in the south of Libya, the increase of uncontrolled migration and human trafficking, and the proliferation of weapons throughout the country. Libya, a country of roughly 7 million people, has more than 23 million weapons in circulation. Only by creating a strong, unified Libyan army under the control of a single popularly elected and internationally recognized central government can Libya truly address the nation’s ongoing security vacuum.

However, Libya’s security challenges also extend beyond its internal divisions. Both Al-Meshri and Issa Tuewiger, Libya’s former Minister of Planning and a member of Al-Meshri’s delegation, emphasized the need for foreign powers to curb their interference in Libya’s internal affairs. While the offending countries were not mentioned by name, Egypt and the United Arab Emirates have both been key international backers of General Haftar’s LNA, while militias from Chad and Sudan have been particularly disruptive in crossing Libya’s southern border. Western nations like the United States and Italy have voiced unwavering support for the GNA, while France’s pro-GNA rhetoric is colored by its deployment of special forces and military advisors to aid the LNA in Eastern Libya. Russia, which has long been a supporter of the LNA, has also recently embraced Saif al-Islam Gaddafi, son of the deposed dictator, as a potential political player in Libya. The delegation stressed that as Libya assumes a larger role in the international community, it needs to form partnerships with regional and international actors as opposed to being viewed as a nation ripe for foreign powers to meddle with in pursuit of their own interests.

Al-Meshri and his delegation also spoke on the economic challenges facing Libya. While Libya is blessed with an abundance of valuable natural resources that its more densely-populated neighbors lack, its economic institutions have been severely stunted from decades of Gaddafi’s command economy, resulting in high unemployment and a lack of candidates who are eager or qualified to fill available jobs. Additionally, while Libya’s significant petroleum reserves have long been the lifeblood of the economy, Al-Meshri called them, “both a blessing and a curse,” to Libya’s economic development because reliance on oil revenues has long incentivized neglect of other segments of the economy. Tuewiger noted that Libya has experienced the damage that a drop in oil prices can do to an economy that is overly-dependent on it, while also emphasizing the need to enrich other economic sectors such as tourism and invest in the creation of institutions to support private enterprise and private sector job growth. Libya’s crude oil exports rose to nearly 800,000 barrels/day in 2017 which, despite being an improvement from previous years, pales in comparison to pre-Arab Spring export totals.

Finally, Al-Meshri discussed more personal issues regarding the role of ideology and identity in Libyan politics. Asked about his recent resignation from the Muslim Brotherhood, an Islamist religious and civic group that has become increasingly active in Libyan politics, he defended the organization’s role in Libyan society. However, Al-Meshri emphasized that his decision to leave the Brotherhood was born from a desire to better represent the Libyan people, many of whom are weary of the organization’s Islamist ideals. Al-Meshri is a founding member of the Justice and Construction Party which is closely affiliated with the Muslim Brotherhood. Al-Meshri was quick to note that fewer than 20 percent of the Justice and Construction Party’s members also belong to the Brotherhood. Al-Meshri stressed that he identifies first and foremost as a public servant, and that the need to put service above ideology was essential to fostering reconciliation.

Al-Meshri’s message of reconciliation and unity served as a common thread for the discussion, even manifesting itself in the assembly of his delegation. Al-Meshri emphasized that his group included members with diverse ethnic backgrounds and areas of expertise all committed to the singular cause of public service. Still, it is fair to question to what degree Al-Meshri’s talk of unity reflects the realities on the ground or even the position of his own government. While Al-Meshri’s optimism in Libya’s political future may prove warranted in the long run, Libya’s internal divisions, its deeply-rooted structural challenges, and the epidemic of outside forces vying for influence within its borders will be difficult to overcome in the foreseeable future.