What the U.S. Can Do to Advance Israeli-Palestinian Peace 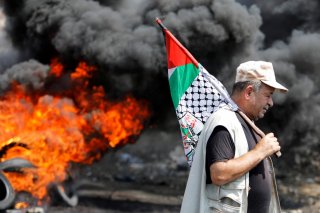 Against the backdrop of normalization between Israel and the United Arab Emirates and more recently Bahrain, are continued condemnations by Palestinian leaders. Palestinian president Abbas called the moves a “stab in the back,” “despicable,” and a “betrayal.” Even so, rumors regarding Saudi normalization continue to circulate.

Momentum is palpable. How then to move forward with an “outside in” strategy for Palestinian-Israeli peace? Keeping pressure on Palestinian leaders while finding new means to address Palestinian needs is key.

First should be new emphasis on high-level U.S. diplomacy in Europe and the Middle East aimed at convincing donors to the United Nations Relief and Works Agency (UNRWA), the internationally funded welfare agency for Palestinians, to rechannel funds away from the organization and towards targeted education, social service, health, and development programs aimed at the Palestinians. UNRWA remains a mainstay of Palestinian rejectionism, characterized by advocacy for the “right of return.” Perhaps as important, UNRWA is a European fetish.

For better and for worse, the only person capable of doing this is President Donald Trump’s son-in-law, Jared Kushner. Only Kushner has the president’s full trust and understands his uniquely transactional mindset. And in contrast to the post-war decades of seeing the Palestinian issue as an isolated issue with unique importance, the Trump Administration sees it as merely one of many, tied to broader questions of peace, economic development, and a reduced American security footprint.

Tying changes in governmental funding for UNRWA (and for politicized NGOs that Europeans fund) to other issues of concern to European and Middle Eastern states is simple politics. This approach will be more successful than inertia-bound funding for UNRWA and the search for a perfect solution to the Israeli-Palestinian conflict.

A second area for the administration combines foreign and domestic policy: the continued draining of the Washington “swamp,” which among other things has impeded Israeli-Palestinian peace. For example, for decades the U.S. Consul in East Jerusalem acted as the de facto ambassador to the Palestinians, undercutting broader U.S. policy. This politicized position has been eliminated. The longer term “Arabist” mindset within the State Department also contributed to mixed messages being spread regarding U.S. policy throughout the Arab world. Parallel attitudes immersed in intellectual and bureaucratic inertia have prevented long-overdue rethinking about NATO and other issues.

As was seen from the outside, the “Deep State”—the permanent foreign policy, intelligence and security apparatuses—resisted Trump’s policy changes. This was done mostly covertly, as State Department representatives refused to implement changes in policy, sometimes criminally, as the “Russiagate” scandal has shown.

Identifying, reassigning, firing, and otherwise changing the culture of these immense establishments is critical for American democratic accountability as well as for the execution of policy by the executive branch. The Palestinian issue is no exception.

But a critical complement to “draining the swamp” in Washington is draining the swamp in New York. Beyond UNRWA, Americans should be shocked at the extent to which the United Nations (to which the United States contributes approximately $10 billion) is uniquely dedicated to the Palestinian cause. In addition to the $1.4 billion UNRWA budget (to which the United States no longer contributes), the UN claims to spend another $400 million of the “State of Palestine.” This is approximately twice as much as it spends on Mozambique—a country with a population of 29.5 million.

It is unclear whether this figure includes funds spent by the UN on its vast internal Palestinian support infrastructure. This includes the General Assembly’s Committee on the Exercise of the Inalienable Rights of the Palestinian People, the Department for Political and Peacebuilding Affairs’ Division for Palestinian Rights, the unique database called the United Nations Information System on the Question of Palestine, the “International Day of Solidarity with the Palestinian People,” the “Quartet,” the countless reports, conferences, newsletters, and bulletins, or funds spent by the Office for the Coordination of Humanitarian Affairs, the Security Council, the Human Rights Council (with its Special Rapporteur), or the Economic and Social Council, and their “civil society partners,” most of which support the Israel boycott movement.

Needless to say, no other cause receives even remotely this much money or institutional devotion from the UN. American policy should zero out contributions that are used by the UN to prolong the Palestinian-Israeli conflict, a fight aimed at subverting Israel’s legitimacy as a state, promoting the Palestinian narrative of their martyrdom at the hands of Israel, and the international community’s putative responsibility to support them until their perfect solution is achieved.

It is a telling sign—of either desperation or overconfidence, certainly born of hope that the Democrats will retake the White House—that UNRWA is undertaking joint events with a leading U.S. boycott organization, American Muslims for Palestine. Former Vice President Joe Biden has promised to restore at least $350 million in UNRWA funding, as well as increasing funding to many other UN programs, including rejoining the World Health Organization. And while Biden himself has been firmly opposed to the Israel boycott movement, his campaign has reached out vigorously to anti-Israel activists.

The “outside-in” approach of defying conventional wisdom, taking chances, and demanding risk-taking and concessions on the part of allies like Israel, the UAE, and Bahrain, has paid significant dividends. Furthering that cause by defunding and redefining dysfunctional institutions both at home and internationally, getting U.S. aid directly to those in need, and creating a sense of urgency about opportunities that may be lost, should be expanded regardless of who occupies in the White House in 2021.