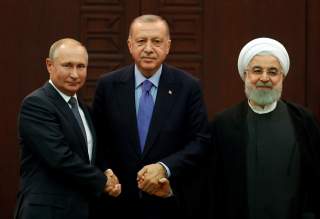 President Donald Trump has upended American policy in Syria, and possibly in the entire Middle East, in one stroke. His unilateral decision to withdraw American troops from the Kurdish region of northern Syria, and thus give a green light for the Turkish invasion of the Kurdish enclave, has put all American goals in Syria in grave jeopardy. These included protecting the autonomous Kurdish enclave as a quid pro quo for the Kurdish militia’s singular military contribution in liquidating the Islamic State and capturing its capital Raqqa at the cost of thousands of lives. They also included preventing the Assad regime from reasserting control in northern Syria (again, a very important American objective in Syria was to circumscribe Russian and Iranian reach and influence in the country). Finally, one of the principal aims of American policy in both Syrian and Iraq has been to prevent the resurgence of the ISIS.

All of these objectives now lie in tatters.

The People’s Protection Units, also known as the YPG, having been let down by the United States, has in desperation entered into an alliance with the Assad regime to counter the Turkish invasion. Syrian government forces are reported to be rapidly moving into the Kurdish enclave and toward the Turkish border. The Kurds have justified their decision by declaring that it is the duty of the Syrian government to protect the territorial integrity of the state. This is a major reversal of the YPG’s earlier stance that was anchored in gaining autonomy from Damascus and, as a corollary, preventing the intrusion of regime troops into the Kurdish proto-state. The YPG had bargained that an American military presence in the area would not only deter a Turkish attack but also discourage the Assad regime from sending in its troops into Kurdish territory. The YPG and its political arm, the PYD, seem to have given up their goal of autonomy from Damascus in return for ensuring the survival of the Kurdish people in the face of the Turkish assault that they fear could take on genocidal proportions.

The YPG and the umbrella force that it led, the Syrian Democratic Forces (SDF), were until recently perceived by decisionmakers in Washington as a barrier to the intrusion of Russian and Iranian military and political influence in northern Syria. Now with the YPG allied with the Assad regime it is only a matter of time before one sees Russian military advisers and Iran-backed Shia militias operating in the Kurdish enclave. Russia and Iran are the Assad regime’s principal supporters, and the latter was able to turn the tide in the Syrian Civil War largely due to the aid of Russian air power and military prowess of battle-hardened Hezbollah fighters supported by the IRGC and its al-Quds force.

Both Russia and Iran are highly interested in attaining footholds in northern Syria. Both would like to see the Assad regime consolidate its control in all of Syria. Russia is also interested in gaining access to territory close to the Turkish border in order to enhance its bargaining power with Ankara over the Idlib enclave in northwestern Syria. While the Idlib region is under the nominal protection of Turkey, several hardline Islamist factions whom Turkey finds difficult to control infest it.

These Islamist groups are inveterate enemies of both the Assad regime and Russia. Moscow would like to either eliminate them completely or drive them out of Syrian territory. To that end, it has conducted several air attacks on the Idlib enclave in contravention of the Sochi agreement it signed with Turkey in September 2018. Russia has claimed, with a great deal of justification, that Ankara has not been able to keep its part of the bargain by not disarming Islamist factions and being unable to impose order in Idlib. Russia’s strategic position vis-à-vis Idlib is likely to be buttressed once it gains access to the Kurdish region of northern Syria that borders Idlib.

Iran will also make major political gains through the reassertion of the Assad regime’s control of the Kurdish enclave. Iran itself is faced with its own problem of Kurdish secessionist aspirations: the Kurdish proto-state in Syria was a source of emulation not only for the Kurds in southeastern Turkey, but also the Kurds in northwestern Iran who have been in a state of an on-again off-again rebellion against Tehran. Eliminating Kurdish autonomy and bringing the Kurdish enclave under the control of Damascus therefore redounds to Iran’s benefit as well by eradicating this source of attraction for Iranian Kurds. Moreover, the extension of the Assad regime’s control into the Kurdish areas would also mean the indirect spread of Iranian influence and presence in a region of Syria, and that also bordering Turkey, from which Iran had been excluded. This would give Iran greater leverage within Syria as well as in relation to Turkey, with which its relations have been ambivalent.

Finally, the mayhem created by the Turkish invasion, combined with the withdrawal of American military presence from northern Syria, will be a boon for the Islamic State. ISIS not only has sleeper cells in the region, but also had thousands of fighters that were incarcerated in the Kurdish enclave and guarded by YPG/SDF forces. These forces are now required to fight the Turkish invasion and, therefore, are unable to guard ISIS fighters and their dependents, many of who have already escaped from the compounds where they were housed. It is almost certain that these fighters will regroup and could well form the kernel of a resurrected Islamic State. Several terrorist attacks attributed to ISIS have already been reported from northern Syria, and instances of such attacks are likely to increase in the near future.

One fears that this could lead to a repetition of Iraq after the American invasion of 2003, which left large swathes of territory ungoverned and in chaos, allowing terrorist groups to mushroom. The Turkish invasion of the Kurdish enclave in northern Syria and the American complicity in this act could very well usher in a rerun of the Iraqi scenario that created al-Qaeda in Mesopotamia that eventually morphed into ISIS.

Even if a fraction of this scenario turns out to be true, it will mean further suffering and turmoil in a region that has already had more than its share of both. What is absolutely clear is that the hasty decision to withdraw American troops from the Kurdish region of Syria, thus paving the way for the Turkish invasion, has not only left the Kurds with a tremendous sense of betrayal but also overturned most of the goals that Washington had set for itself in Syria and the rest of the Middle East. The betrayal of the Syrian Kurds has sent a clear message to America’s allies in the region and beyond that they can no longer depend on Washington’s assurances regarding their security, and that they should search for other options in order to ensure their own safety.

Mohammed Ayoob is University Distinguished Professor Emeritus of International Relations at Michigan State University and a non-resident senior fellow at the Center for Global Policy in Washington DC. His latest books include Will the Middle East Implode? and The Many Faces of Political Islam.