Why America Doesn't Want to Admit That it Failed in Afghanistan 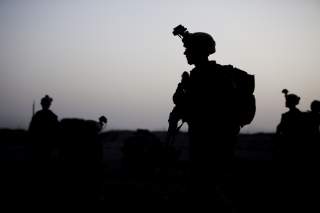 After nine rounds, ten months of direct negotiations, and a whole lot of squabbling, the United States and the Taliban have finally reached an agreement in principle. According to the terms that have been reported so far, Washington would swap an initial U.S. troop reduction in exchange for a Taliban commitment to reduce violence, a pledge to enter into political talks with the Afghan government on a future political settlement, and an assurance that Taliban-controlled areas will not be used by transnational terrorists to plot attacks against Americans. Zalmay Khalilzad, a former U.S. Ambassador to Afghanistan and the Trump administration’s point-man on the Afghan conflict, explained to TOLO News that over five thousand U.S. troops would depart from five bases within 135 days of the agreement’s signing. Assuming that Taliban fighters decrease violence at the same time American soldiers pack up and leave, President Donald Trump would be on his way toward extricating the United States from the longest conflict in its history.

A majority of Americans tuned out the war a long time ago, viewing it as a futile and expensive conflict with little to show for all of the investment poured into the endeavor across three successive U.S. administrations. But there is a significant portion of the Beltway that simply can’t envision a full U.S. military departure from Afghanistan, and most of them buy into the conventional wisdom that successful counterterrorism policy is impossible without boots on the ground. Others turn to simple phrases and buzzwords, dumbing down a complicated war into winners and losers in order to influence a president who considers the word “loser” the ultimate insult. Brit Hume of Fox News labeled the agreement with the Taliban a humiliation, and you can bet that Trump heard about a high-profile figure on his favorite news network sounding off in the studio. "This is called losing,” Hume told anchor Chris Wallace on September 1. "We completely—ultimately abandoned that situation over there,” as if the United States was some paper tiger who simply threw up its hands in despair when the situation got too tough.

One can only hope that Khalilzad, Secretary of State Mike Pompeo, and Trump are prepared for the fuselage of invective coming their way as more details of the U.S.-Taliban deal emerge in the days ahead. Columns will be written in the Wall Street Journal, the Washington Post, and the Atlantic criticizing whatever arrangement is made between Washington and the Taliban. Such criticism is warranted because there are legitimate concerns about the Taliban’s willingness to implement its promises and because U.S. soldiers have been stationed in Afghanistan for such a long period of time that, for some people, anything different is psychologically deeply uncomfortable. Scholars and analysts in Washington who have been following the conflict for years will jump on television and warn Trump that he is making a fatal error by trusting the very same insurgent group that once housed Osama bin Laden—conveniently ignoring that the Taliban has an incentive to avoid learning the same lesson twice after watching its Islamic emirate go up in flames two months into the U.S. operation. Sen. Lindsey Graham, true to form, can be expected to call Trump on his cellphone to try to frighten him into staying the course, as if staying the course is not the literal definition of insanity. The president, who at times takes outside advice more seriously than the recommendations provided by his official advisers, may very well buckle to the pressure. Indeed, when his political allies in Congress and former Secretary of Defense Jim Mattis vocally protested the decision last year to withdraw all U.S. forces from Syria within months, Trump changed his tune pretty quickly. If it can happen in Syria, then it can happen in Afghanistan as well.

On Afghanistan, however, Trump would have public opinion on his side. A Pew Research Center survey conducted from May 14–June 2 couldn’t be any clearer; Americans are tired of the war and frankly find the whole thing absurd. About 59 percent of American adults and 58 percent of veterans no longer see the war in Afghanistan as being worth the effort. This is the end result of a generation-long social science experiment that has cost nearly a trillion dollars in taxpayer money and been defined by troop deployments that go on and on and on. Meanwhile, the Taliban controls about half of country, nonchalantly preying upon Afghan cadets at their isolated checkpoints and executing bomb operations deep into the heart of Kabul. U.S. troops are sitting ducks in such an environment, and there is very little they can do but help the Afghan government manage what seems like a continuous stalemate.

While nobody in a position of power likes to admit it, the United States has done all it can for Afghanistan. The roads, schools, hospitals, security forces, and ministries constructed, and supported courtesy of the U.S. taxpayer are ineffective bureaucracies susceptible to corruption, a sad omen to the nonsensical assumption that Uncle Sam could play the “white knight” and build a Western-style order in a disorderly country at war continuously for forty years.

The people who need a reality check are not those pining for a U.S. withdrawal, but those who insist on staying indefinitely. Many of the same people who now vociferously protest against a political deal with the Taliban are some of the very same geniuses who believed that enough airpower and time could sway the insurgency into watering down its demands or defeat them outright. Forgive those of us who are unwilling to buy the same horse a third time.

Let there be no mistake: if the Taliban is stupid enough to allow Al Qaeda or the Islamic State to plan terrorist attacks against the U.S. homeland or U.S. interests overseas, they can expect a tenfold military response. The United States will always reserve the right to defend its people, just as it has the right to use its military capacity and capability in the event a plot is imminent. There is nothing in the agreement that prohibits Washington from exercising the right of self-defense, and the Taliban should be under no illusions about the willingness of Trump—or any future U.S. president—to authorize the full weight of the U.S. military if the situation requires it.

But stretching out Washington’s participation in a never-ending civil war any longer, as if this is the most efficient way to keep the American people safe, is foolish. One could even call it a dereliction of duty.