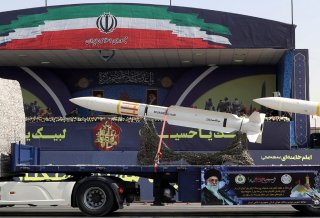 The Iranian military claims to have put its first satellite into orbit in a surprise launch on Wednesday.

Iran has a history of failed launches in pursuit of a space program. The United States has long condemned these launches as attempts at developing the Iranian ballistic missile program. The launch on Wednesday—which has not yet been independently confirmed—came without any prior announcements.

The satellite was launched from a three-stage Qased carrier into a 425-kilometer orbit, Islamic Revolutionary Guard Corps (IRGC) commander Maj. Gen. Hossein Salami claimed. State-run news agencies carried images of the satellite launching but did not provide evidence that it had successfully attained the 425-kilometer orbit.

“Today, we can visualize the world from space, and this means extending the strategic intelligence of the powerful defense force, the IRGC,” he told the state-run Islamic Republic News Agency. “Today, the powerful armies of the world do not have a comprehensive defense plan without a presence in space, and attaining this superior technology that brings us to space and expands our range of capabilities is a strategic achievement.”

U.S. officials fear that Iran’s space program could be cover for an intercontinental ballistic missile (ICBM) program in addition to an intelligence threat.

The intelligence community told the Congressional Research Service in 2018 that “[p]rogress on Iran’s space program, such as the launch of the Simorgh SLV in July 2017, could shorten a pathway to an ICBM because space launch vehicles use similar technologies.”

However, the report to Congress also noted that “no country has developed an ICBM from its space launch technology base; space launch programs have generally developed from military ballistic missile programs.”

The State Department did not immediately respond to a request for comment, but it had condemned an earlier failed space launch on February 9, 2020.

“The technologies used to launch satellites into orbit are virtually identical and interchangeable with those used in longer-range systems, including intercontinental ballistic missiles,” Secretary of State Mike Pompeo said on February 11. “Each launch, whether failed or not, further allows Iran to gain experience using such technologies that could benefit its missile programs under the guise of a peaceful space program.”

He added that “[t]he world’s leading state sponsor of terrorism should not be allowed to develop and test ballistic missiles.”

Pompeo condemned his predecessors in the Obama administration for failing “to constrain testing that could support further advancement of Iran’s ballistic missile program” in a 2015 deal regulating Iran’s nuclear research.

The Trump administration left the 2015 deal two years ago, and has been applying a self-described campaign of “super-maximum economic pressure” in a bid to force additional concessions from Iran.

He then apologized for attempting to pass off a photo of a children’s spaceman costume as an example of a future Iranian astronaut’s uniform.