Why America Should Save Iran from Coronavirus 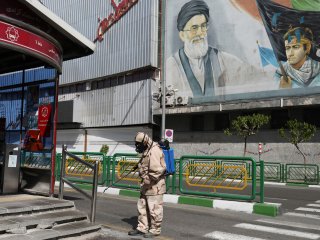 As the world suffers from the ravages of the coronavirus, Iran has been among the countries worst hit by the pandemic. The coronavirus crisis has worsened the plight of Iran’s people, who have suffered from years of bad choices by its repressive government.

The pandemic offers an important opportunity to increase the focus on Iran’s people in America’s policy debates—and how to best advance human security overall. Regrettably, the voices of the Iranian people are often overlooked in today’s political debates over U.S. policy on Iran.

According to unreliable official Iranian government statistics, almost seventy-five thousand Iranians have contracted the virus and more than forty-six hundred have succumbed to it. The real toll is likely much higher, with firsthand accounts of an overwhelmed Iranian health care system coming on the heels of an inept response to the initial outbreak that put regime interests ahead of the Iranian public’s health. The coronavirus pandemic worsened the existing human-rights abuses perpetrated by the Iranian government, from jails overflowing with political prisoners to the regime’s own lack of transparency.

Here, in the United States, the pandemic has had the predictable impact of reinforcing pre-existing divisions rather than fostering creative thinking in Iran policy debates. Hawks in the Trump administration see the regime as vulnerable thanks to the virus and have pushed for an escalation of the administration’s ineffective “maximum pressure” campaign against Tehran. Some voices on the Left view the pandemic as an opportunity to push for wholesale sanctions relief for Iran without asking anything in return from Tehran.

Neither of these policies will work: it’s unrealistic to think that super-maximum pressure will convince Tehran to capitulate to the twelve demands outlined by Secretary of State Mike Pompeo almost two years ago. Worse, such a course of action would undoubtedly put the United States and Iran on the brink of outright war yet again. But blanket sanctions relief itself is a mirage: a regime as corrupt and opaque as Iran’s will very likely divert any windfall to its own benefit.

Recycling talking points from across America’s political spectrum will achieve little except keep the country stuck in the past. America should discuss a new alternative to the current approach—one that recognizes the failures of the Trump administration’s approach and takes into account how poorly Iran’s government treats its own people.

More specifically, the United States should create an expansive whitelist of coronavirus-related medical equipment and supplies—think ventilators and masks here, as well as potential vaccines—that can be safely exported to Iran as well as Iranian entities that can import them. This index would allow companies, nongovernmental organizations, and governments to export these goods to Iran without running afoul of other U.S. sanctions. In addition, the United States should also explore the creation of a dedicated financing mechanism that facilitates the purchase of these supplies by Iran. This channel would help reduce the risk that Iran’s government would divert funds or equipment to benefit regime favorites and security organs.

Iran’s track record when it comes to requesting and accepting coronavirus aid leaves much to be desired. Supreme Leader Ali Khamenei, for one, has peddled conspiracy theories about the origin of the virus and categorically rejected accepting any U.S. assistance. This stance has been reiterated repeatedly by Iranian government officials, with an Iranian Foreign Ministry spokesman proclaiming Tehran will never ask for American help against the virus. Nor is this attitude simply a result of long-standing enmity toward the United States or hostility toward the Trump administration: at the end of March, Iran’s Health Ministry called off an effort by Doctors Without Borders to build a temporary coronavirus treatment facility in Isfahan.

Iran’s troubles coping with the pandemic seem to have little to do with the state of its finances. Khamenei has authorized President Hassan Rouhani to withdraw a billion euros from Iran’s sovereign wealth fund to finance its response to the virus, for instance. At the same time, Iran continues to fund its proxies and allies across the region to the tune of at least several hundred million dollars per year. Sanctions have not prevented the regime from spending significant sums on its priorities—and the well-being of the Iranian people has not been among them.

In the same way that the Trump administration uses China as an excuse for its own failure to adequately prepare the United States for the coronavirus, Iran’s government uses U.S. sanctions as a scapegoat for its own failures. But U.S. policy debates shouldn’t play along with Tehran’s propaganda—instead, they should focus on practical ways to ensure medical equipment and supplies get to Iran and benefit the Iranian people. In part, that entails stepping back from the Trump administration’s ineffective maximum pressure policy, easing tensions across the Middle East, and putting diplomacy first in U.S. policy toward Iran.

A better approach would elevate diplomacy and open up clear avenues for the export of vital medical supplies to Iran that would reassure potential exporters that they won’t strengthen the hand of Iran’s regime at the expense of its people. In the long run, engaging Iran and its people will require a fundamental re-think of America’s approach to the Middle East. But for now, it’s smarter to focus on efforts that help the Iranian people address this urgent crisis in ways that don’t succumb to the shallow partisan debates that have dominated America’s Iran discussion for years.

Brian Katulis is a senior fellow at the Center for American Progress, where his work focuses on U.S. national security strategy and counterterrorism policy.

Peter Juul is a senior policy analyst at the Center for American Progress, where he has specialized in the Middle East, space policy, and U.S. national security policy for more than a decade.