Why America Won’t Win a Sanctions Showdown Over Iran 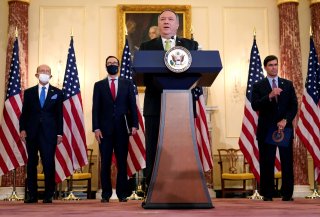 United Nations Security Council Resolution 2231 makes for dry reading. The resolution and its appendices are over a hundred pages long, laying out the provisions of the UN’s acceptance of the 2015 Joint Comprehensive Plan of Action (JCPOA) brokered between Iran and the five permanent members of the Security Council plus Germany. At its core, the resolution accepts the JCPOA and reinforces it with international law. Iran, it states, will refrain from certain levels of nuclear enrichment. In exchange, the Security Council will gradually lift the sanctions it applied against the regime from 2006 until 2010.

The resolution is relevant again today because the Trump administration’s newest effort to sanction Iran relies heavily on a controversial reading of one of its provisions. On August 14, America introduced a resolution that would have extended the UN Security Council’s arms embargo on Iran, which is scheduled to expire on October 18. Russia and China, who want to sell weapons to Iran, voted against the resolution, and eleven of the remaining twelve nations abstained, killing the measure and keeping the October expiration date intact. Faced with this outcome, Secretary of State Mike Pompeo invoked Resolution 2231 in an August 20 letter to UNSC President Dian Triansyah Djani of Indonesia, demanding a reimposition of all JCPOA sanctions and therefore blocking the arms embargo’s sunset.

Could Pompeo actually do this? The key provision in Resolution 2231 lies in its eleventh paragraph, which decrees that:

This paragraph lays out the principle of “snapback sanctions.” If any “participant state” in the JCPOA feels that Iran is in “significant non-performance of commitments,” then it can file a complaint with the UN Security Council and request an end to sanctions relief. Once this complaint has been made, the other members of the Security Council can either accept it or pass a resolution saying that the complaint is invalid and sanctions relief should continue. Crucially, however, that resolution can then be vetoed by any of the five permanent members of the UN Security Council. Therefore, in effect, any of the P5 countries can force the others to reimpose sanctions on Iran by filing a complaint and vetoing any attempt to invalidate it. This is the mechanism Pompeo intended to use when he delivered his August 20 message.

However, there is a big problem with this: The United States is, by any conventional understanding, no longer a “participant state” in the JCPOA, so it lacks the standing to file a complaint. The Trump administration’s response, explained in Foreign Policy by Richard Goldberg of the Foundation for the Defense of Democracies, is that America’s status as a “JCPOA participant” is permanent, its actual commitment to the deal notwithstanding. If so, from a legal perspective, Pompeo’s actions are valid, and the Security Council must snap back its sanctions. However, others have criticized this argument. In the same magazine, Iranian journalist Saheb Sadeghi calls this understanding of Paragraph 11 “shallow and legally tenuous,” and also notes that if the United States was still a participant in the deal, it would be legally required to fulfill its own share of the obligations—obligations which, of course, it stopped complying with in 2018.

Legal chicanery aside, the United States has made it clear that it is not currently participating in the JCPOA. Trump has been using this as a talking point for two years, and the rest of the UN Security Council has taken him at his word. Consequently, after Pompeo issued his letter on August 20, thirteen of the fifteen current members of the UN Security Council announced that they viewed Pompeo’s proclamation as invalid. Rather than introduce a resolution to vote down Pompeo’s complaint, the rest of the Security Council simply ignored the complaint altogether. This group included Russia and China, but it also included Britain, France, and Germany—our historic allies, and all the original signatories to the JCPOA—as well as Belgium, Indonesia, Vietnam, Niger, South Africa, Estonia, Tunisia, and Saint Vincent and the Grenadines. (The Dominican Republic is still in America’s corner.) Since there was no consensus on the legitimacy of the complaint, Djani declined to act on it.

Predictably, the Trump administration officials proclaimed indifference. U.S. Ambassador to the UN Kelly Craft said that the United States government did not “need a cheering section to validate our moral compass.” Still, the UN setback was unquestionably embarrassing. It became a great deal more embarrassing when, on September 19, Pompeo issued a statement insisting that, since the UN Security Council’s thirty-day period had elapsed, all economic sanctions on Iran were legally back in effect, and demanding that “all UN Member States […] fully comply with their obligations to implement these measures.” So far, all UN member states have ignored him.

Tehran was unsurprisingly delighted by the impending expiration of its arms embargo and by the United States’ evident miscalculation of its own influence on its allies. On September 21, Iranian Foreign Minister Mohammad Javad Zarif addressed the Council on Foreign Relations, saying, “The behavior of governments internationally indicates whether those governments are respected international actors. And today, as we stand, it is the United States which is considered by the international community as an irresponsible actor that violates international norms, that acts arbitrarily based on, basically, will to use force and power.”

“An irresponsible actor that violates international norms?” Even Zarif, the Islamic Republic’s most skilled defender, must have known that he could have easily been describing his own country, whose history of flouting UN rules is long and well-documented. (In the same conversation, the foreign minister had to fend off questions about his government’s controversial execution of wrestling champion Navid Afkari, a move which has placed Iran’s participation in the Tokyo Olympics in question.) Fundamentally, however, Zarif has a point; even after the rest of the UN Security Council decisively rejected the United States’ interpretation of Resolution 2231, America ignored it, plowed forward with sanctions, and demanded the rest of the world obey—hardly the actions of a responsible member of the international community.

Ironically, none of Pompeo’s justifications for the initial complaint are clearly false. Though “significant non-performance” is another contentious phrase, Iran has clearly violated the agreement since the American withdrawal; it has blocked inspections of key sites and exceeded its allowed enrichment levels. If Trump were still a party to the deal, then the United States would probably be within its rights to invoke Paragraph 11 and extend the arms embargo. But the Trump administration made the calculated decision that, even if it acted alone, it could do more to prevent Iran from nuclearizing by exiting the agreement and imposing unilateral sanctions from outside than by accepting the bargain of enrichment limits for sanctions relief. It has since become clear that, because of this choice, and arguably also because of the Trump administration’s no-holds-barred, utterly transactional approach to foreign policy in general, the United States now has neither the legal standing nor the political capital to coax Europe into doing what it wants. Without international cooperation, the impact of American sanctions on Iran, though still significant, has been hindered.

Broadly speaking, then, has Trump’s strategy been an effective one? U.S. withdrawal has had serious consequences for Iran—by President Hassan Rouhani’s estimate, since 2018, American sanctions have cost the country some $150 billion in lost revenues, and the Iranian rial is at its lowest value in history. But Iran remains defiant, and as it enriches uranium above its allowed limits, its breakout time grows shorter. Moreover, after the arms embargo’s expiration in two weeks, the Islamic Republic will promptly begin buying conventional arms from Russia and China, notably including modern fighter aircraft to replace its aging fleet. The Trump administration will be put in the difficult position of what to do next. Either it can allow the sale, or it can double down and try to discourage Russia and China from selling to Iran by threatening reprisals. But if Russia and China call America’s bluff and go ahead with the sale, and if Europe continues to refuse to follow the Trump administration’s lead, its next steps are much less clear. No matter his decision, if the president is re-elected in November, the escalating conflict with Iran is likely to dominate his second term.

Trevor Filseth is an editorial intern at the National Interest.