Why are the Houthis Stepping Up Attacks Against Saudi Arabia? 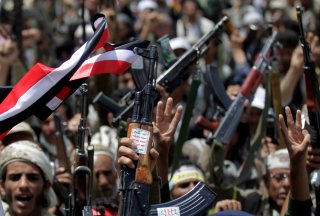 Since the Houthi takeover of the Yemeni capital, Sanaa, in 2014 and the Saudi-led intervention to fight the rebels in early 2015, Houthi drone and missile attacks against Saudi Arabia have become a common occurrence. While over the years there have been upticks in such attacks, the current intensification that has seen almost daily attacks since early February can likely be explained by one factor: the recent change in the White House and the new administration’s policy change vis-à-vis the Saudi intervention in Yemen.

Under former President Donald Trump, the U.S. government engaged in a “maximum pressure” campaign against Iran that included a hard stance against the Houthis. Saudi Arabia and its de facto ruler Mohammed bin Salman (MBS) enjoyed Trump’s support and plenty of freedom to maneuver from Washington, meaning that the Saudi air campaign in Yemen—and accusations of Saudi human rights violations—went on with little to no scrutiny from the U.S. government. But with the election of Joe Biden, things changed. The Democrat had made it clear before winning the presidential race that the United States would no longer support the Saudi intervention in Yemen. Indeed, with less than two months in office, Biden has already reversed a Houthi terrorist designation, ended U.S. military support for the Saudi-led offensive—although it maintains intelligence sharing with Riyadh to defend the kingdom against Houthi strikes—and reportedly had U.S. officials hold a direct meeting with the Houthis in the Omani capital Muscat.

Notwithstanding the Biden administration’s more conciliatory tone, Houthi attacks on Saudi Arabia have intensified rather than decreased. This is due to the fact that the Yemeni rebels likely see Biden’s actions as predictable and as a sign of weakness. Trump’s unpredictability and disregard for humanitarian accountability combined with the carte blanche and full support he gave Saudi Arabia were likely a matter of concern for the Houthis and may have held back attacks against the Gulf kingdom, especially in his last days in office. However, with Biden’s diplomatic approach and removal of military support for the Saudis, the Iran-backed group is attempting to seize this opportunity as fiercely as it can to inflict harm and losses on Saudi Arabia so that it can gain leverage before negotiations are held. In that context, along with the uptick in Houthi attacks on the kingdom is the rebels’ enhanced push to take Marib city, the Yemeni government’s last stronghold in northern Yemen. Despite incurring many losses in the past weeks, the Houthis show no sign of stopping their offensive. Capturing Marib city would grant the Houthis significant leverage ahead of negotiations due to its proximity to the Houthi-controlled capital Sanaa and especially to much of Yemen’s oil and gas reserves.

It is safe to say that as long as the Houthis see a military victory in Marib city as something within reach, they will carry on with ground offensives towards the city and attacks on the kingdom, avoiding the negotiating table as long as they haven’t secured enough leverage. Capturing Marib city and consolidating their rule over Yemen never seemed so reachable given the fact that the United States has ceased military cooperation meant to build up Saudi air offensive capabilities. That is not to say, however, that taking the city will be easy. Despite the Houthis’ recent territorial advances, the city still stands thanks to both its tribal forces and continued Saudi air strikes.

Taking all of this into account, the United States will have to step up its diplomatic efforts, likely through Oman. The Muscat meeting between U.S. officials and Houthi negotiators was reportedly part of a new “carrot and stick” approach by Biden, but so far, we have only seen the “carrot.” The first form of the “stick” could have been the sanctions recently imposed on two Houthi military leaders, but it will take much more than that to get the rebels to cease hostilities and negotiate. The other option for the U.S. government in the face of continued—and more impactful—attacks against Saudi Arabia and fighting over Marib city would be resuming its military support for the Saudi-led campaign. However, this would come at a great personal cost for Biden and is therefore unlikely at the moment.

In the meantime, the Iran-backed rebels will likely continue their offensives on the two fronts with attacks on Saudi territory and the push to capture Marib city. The Saudi-backed government’s last stronghold in northern Yemen has been more stable amid the chaos, but its destiny is hanging in the balance along with that of the entire country.

The Destructive U.S.-Backed Campaign in Yemen