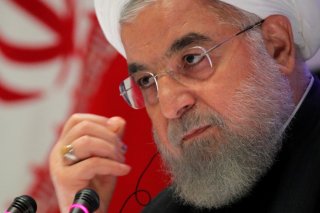 On September 3, 2020, U.S. President Donald Trump tweeted: “To the leaders of Iran, I would greatly appreciate it if you would spare this young man’s life and not execute him. Thank you!”

Less than two weeks after Trump’s plea for clemency, the Islamic Republic executed Navid Afkari, a twenty-seven-year-old Iranian wrestling champion who was arrested during widespread demonstrations over severe economic hardship in August 2018 and sentenced to death for allegedly murdering a security officer in Shiraz, south Iran.

In the first part of his post, Trump highlighted “anti-government” protests across Iran against its deteriorating economy, taking a thinly veiled swipe at Iranian leaders who have been adamantly resisting the U.S. “maximum pressure” campaign of economic asphyxiation and loud calls for new negotiations aimed at “change of behavior.” If there were a scintilla of hope that the government might think twice about Navid’s death sentence and consider commuting it in response to massive domestic and international outcry, President Trump’s politically pointed schadenfreude shattered it once and for all.

The odd and abrupt execution of Navid Afkari on September 12 was, among other things, the Islamic Republic’s explicit show of defiance and recalcitrance against external nemeses seeking regime change in Iran. The state sought, quite symbolically, to drive home the point that it will go to great lengths to ensure its survival and stand its ground against American and allied pressure. More specifically, in the context of Iran’s foreign policy and fraught relations with the West, the high-profile hanging was a stark signal that in its “maximum resistance” against international pressure, Tehran is not averse to spilling blood or violating human rights if that is what it takes to stay in power. A similar message had been bluntly conveyed in November 2019, when the Revolutionary Guards brutally suppressed nationwide mass protests against a state-imposed sharp hike in fuel prices. As a result, over 630 people were killed and thousands more wounded, marking the highest casualty rate caused by systemic state violence against anti-government protesters under the Islamic Republic’s rule.

While the government and affiliated media strived to sell Afkari’s execution as an eye-for-an-eye act of retribution (“ghesas”) to mete out justice, the whole case was unusual if not unprecedented in a few key respects.

Unlike many similar cases in the past, the news of Afkari’s death sentence was made public only a couple of months before his execution, as if it had been intentionally kept quiet and deliberately scheduled to take place at a particular time frame. He had been detained along with his two brothers, Habib and Vahid, about two years earlier in 2018 and severely tortured into confessing to the murder. Afkari’s forced confessions were aired on state TV as proof of his culpability and used to justify the capital punishment, even as his lawyers, a fellow eyewitness to his physical torture, and he dismissed the statements’ validity in detailed audio recordings that revealed the extreme degree of violence exercised to extract them. Lastly, in defiance of established judicial tradition, Navid Afkari was hanged without prior notice to his family. They were not given any chance for a farewell reunion, and his last phone call on the eve of the execution also strongly suggests that he personally had no idea that he was about to be executed, but was, in fact, expecting to be transferred to Tehran on the day the sentence was carried out.

The symbolic killing was a message to Iran’s increasingly discontented and restive society that is bearing the brunt of both crippling U.S. sanctions and the government’s systemic corruption and mismanagement—which have been exacerbated under the former. It was also a “warning” by the ruling establishment “to its population in a climate of increasing social unrest,” as UN human rights experts concluded. Although Iran has maintained one of the world’s highest execution rates since its 1979 Islamic Revolution, the use of the death penalty, and more broadly brute violence as a tool of mass intimidation and repression, has arguably intensified under U.S.-led maximum pressure.

Earlier, on August 5, the Islamic Republic executed Mostafa Salehi, a thirty-year-old protester from Isfahan, for the alleged murder of a Revolutionary Guards officer during January 2018 “livelihood protests” over worsening economic woes and living conditions. Salehi refused to confess to any wrongdoing or involvement in the crime. Around the same time, the Iranian judiciary went on to confirm capital punishment verdicts against five other protesters incarcerated in January 2018, although it held off on the execution of three demonstrators arrested during “petrol protests” in November 2019 following a massive anti-death penalty campaign on Twitter in Persian and English. There is now constant fear among the families of political inmates on death row that they might be suddenly and surreptitiously executed as Navid Afkari was.

Last but not least, the remarkable surge in executions of protesters, particularly when security forces or government proponents lose their lives, is an attempt to reassure the Islamic Republic’s core support base of its resolve to enforce “law and order” and protect their interests. The Iranian establishment cannot clearly afford to alienate its supporters and ignore their growing discontent with how the country is run at a time when it needs them most for self-preservation and survival.

With U.S. plans to sever Iran’s whole economy and banking sector from the global financial system—which would seriously stymie humanitarian trade and food imports as well—this cycle of violent repression at home and costly confrontation abroad is expected to intensify. Still, it should be noted that Tehran has been treading tactfully in the region to deny President Trump any excuse to rally Americans around the flag and boost his reelection chances.

Trump’s warnings about a “much tougher” deal for Iran if he wins a second term in office do not leave much hope for diplomacy and de-escalating tensions between Washington and Tehran either, especially considering his repeated suggestions—including at the first presidential debate—that he might not accept the results and leave the White House should he lose to Democratic nominee Joe Biden.

In a typically bombastic address to the parliament on September 29, General Hossein Salami, commander-in-chief of the Revolutionary Guards, stressed that “military paths” to addressing Iran-U.S. hostility are “closed” and “war is out of the question.” Given the Iranian leadership’s tenacious rejection of negotiations with the United States under maximum pressure, another four years of Trump’s presidency and continued economic strangulation of Iran will likely push the government to resort to more executions and coercion as instruments of social control and political survival.