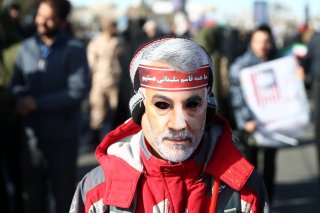 The sudden death of Mohammad Hejazi, the former deputy commander of Iran’s Islamic Revolutionary Guard Corps’ (IRGC) Quds Force, in April represents another blow to the regime’s praetorian guard, following the U.S. strike which killed Qassem Soleimani last year. In a condolence message, Iran’s Supreme Leader Ayatollah Ali Khamenei said Hejazi undertook “great” and “influential” responsibilities in the IRGC. The ascension of his replacement, Mohammad Reza Fallahzadeh, elevates a commander with battlefield and operational experience in the Levant. But Fallahzadeh will be a different kind of deputy from Hejazi.

In the days after Hejazi’s death, Iranian media have provided inconsistent explanations as to his demise. Mehr News said Hejazi died from a heart attack. The Islamic Republic News Agency (IRNA) indicated he passed away from a “heart disorder.” But other outlets reported his death was due to the chemical injuries he sustained during the Iran-Iraq War and that he was recently recovering from the coronavirus. That is not to mention that some officials called Hejazi a martyr, whereas others, like Iran’s supreme leader, made no such mention. But this intrigue masks a more fundamental takeaway from Hejazi’s passing: the removal from the field of yet another powerful IRGC operative.

Hejazi held a breadth and depth of experience within the IRGC before becoming deputy commander of the Quds Force. His career spanned both its domestic security apparatus and its external operations. Following a series of positions during the Iran-Iraq War, intelligence reports indicate Hejazi played a role in the planning of the bombing of a Jewish Community Center in Buenos Aires in 1994. He went on to become commander of Iran’s fearsome Basij Mobilization Forces, a role in which he served for nearly a decade. Hejazi’s tenure coincided with a crackdown on student protests in July 1999 during the presidency of Mohammad Khatami. Later, Hejazi, at Khamenei’s suggestion, allegedly meddled in the 2005 presidential election, which resulted in the victory of Mahmoud Ahmadinejad. These experiences demonstrate Hejazi’s role as a trusted Khamenei disciple.

Beginning in 2007, Hejazi held a series of roles, first as chief of the IRGC’s Joint Staff and then later a short stint as deputy commander-in-chief of the IRGC in its entirety. The European Union sanctioned Hejazi for his role in the crackdown of post-election protests, identifying him as the author of a letter to the Ministry of Health in June 2009 ordering that the medical records of casualties from the episode be sealed. He later moved to the Armed Forces General Staff as deputy commander for readiness, logistics, and industrial research. After this position, Hejazi’s career appeared to wane. He transitioned from the spotlight, serving in the second-highest position among guardsmen, to the shadows as a Quds Force operative. But such a change was in keeping with his previous external operational experience in the 1990s. Israel Defense Forces (IDF) later identified him in 2019 as the commander of Iran’s precision-guided missile project in Lebanon and of all Iranian personnel stationed in Lebanon. One former Iranian government official also claimed that Hejazi had experience in Yemen and Venezuela.

After Soleimani’s death, Esmail Ghaani assumed the commandership of the Quds Force following years serving as his trusted deputy, and Hejazi in turn replaced Ghaani in the deputyship. But Hejazi was a higher-profile deputy than Ghaani. Ghaani spent his time as Soleimani’s second-in-command focusing extensively on Afghanistan. He maintained such a low profile, that when he participated in Iranian delegations to the country, he reportedly dubbed himself as a “deputy ambassador” to Kabul without his hosts knowing his true identity. Before entering the Quds Force, Ghaani served as deputy commander of the IRGC’s Ground Forces. Such a veiled status would have been more difficult for Hejazi given the more senior positions he occupied before the deputy commandership of the Quds Force. In addition, in contrast to Ghaani, Hejazi was more experienced within Iranian domestic politics and internal security, and had spent years cultivating relationships in the Levant, which was different from Ghaani’s focus on Iran’s eastern theater. Hejazi’s status thus compensated for Ghaani’s gaps in seniority and geography.

With Hejazi’s death, Mohammad Reza Fallahzadeh’s elevation to the deputy commandership installs a more junior commander than Hejazi. Experientially, Fallahzadeh is no match for Hejazi, who brought a sterling pedigree among guardsmen before replacing Ghaani. In fact, according to some accounts, Fallahzadeh only became a brigadier general in the IRGC a few years ago—a rank that Hejazi held for more than a decade prior to his service in the deputyship of the Quds Force. Fallahzadeh had previously served as a deputy coordinator of the Quds Force, a commander of Iranian personnel in Syria, a short stint in the IRGC’s Khatam al-Anbiya Construction Headquarters, as a governor of Yazd Province during the Ahmadinejad presidency, as commander of the 19th Fajr Fars and 33rd Al-Mahdi Divisions, and in other provincial IRGC posts. But none of these experiences can compensate for the managerial experience and visibility that Hejazi brought to the deputyship. Additionally, Hejazi was already on the radar of the international community upon his appointment in 2020. He was sanctioned by the United States in 2007. In contrast, Fallahzadeh has not been designated to date. But Fallahzadeh and Hejazi share one attribute: their backgrounds in the Levant, with the former in Syria, where he was wounded in 2016, and the latter in Lebanon. This may demonstrate the continuing need by Iran’s leadership to fill the gap left by Soleimani, who spoke fluent Arabic and was a seasoned Levant operator in contrast to Ghaani, whose specialty was in Iran’s eastern battlefield. It could also indicate an attempt by the highest echelons of the Iranian establishment to focus more on the Syrian theater given the continued Israeli bombardment of Iranian positions there.

Fallahzadeh also has some unique aspects in his career, having had diplomatic experience as a member of an Iranian delegation to the Astana peace talks on Syria in 2017. As previously mentioned, Ghaani also took part in such delegations, albeit undercover. Additionally, unlike his two immediate predecessors, Fallahzadeh received a presidential appointment as a provincial governor. In 2010, he was quoted at a local event calling Operation Eagle Claw—a failed U.S. military rescue mission of American hostages—a “divine miracle” against the United States, which he dubbed “the symbol of evil.” Such a role likely gave Fallahzadeh some political exposure—as a conservative voice as he lost his position after Hassan Rouhani was elected to the presidency—as well as some grounding in provincial matters. However, his tenure pales in comparison to the domestic security credentials of Hejazi. Ghaani himself may also feel more confident in his role as commander with Fallahzadeh as his lieutenant because his resume is no match for Hejazi’s connections to the supreme leader and other heavyweights in Tehran. In fact, as scholar Ali Alfoneh has observed, “Fallahzadeh has admitted that he had no previous relationship” with Soleimani before he was deployed to the battle for Aleppo in 2014. This shows the inferiority of Fallahzadeh’s experience and exposure as compared to his predecessors.

In the end, Hejazi’s passing was a loss not only for the Quds Force but also for the IRGC itself. He was a senior operative whose access to Khamenei and diversity of experience will not be easily replicated. But it does not mark an immediate disruption of the Quds Force’s operational capability—leaders of Iran’s broader Axis of Resistance like Hassan Nasrallah have already been playing a more active management role to fill the void since Soleimani’s demise. Fallahzadeh thus may have more of an impact on intra-Quds Force leadership dynamics than its battlefield playbook.

Jason Brodsky is currently a senior Middle East analyst and editor at Iran International. From 2016-21, he served as the policy director of United Against Nuclear Iran (UANI). In addition to managing the organization’s research and writing portfolios, he assisted former U.S. Senator Joseph I. Lieberman with his work on Iran. Previously, from 2013-16, he served in a variety of capacities at the Wilson Center, including as special assistant (research/writing) to the Director, President and CEO former Congresswoman Jane Harman; as a research associate in its Middle East Program; and as special advisor to Distinguished Fellow Aaron David Miller. Earlier in his career, Jason served as a fellow at the White House in the Executive Office of the President. His research specialties include leadership dynamics in Iran and its Islamic Revolutionary Guard Corps (IRGC), Shiite militias, and U.S. Middle East policy.

Image: An Iranian man wears a mask with a picture of the late Iran's Quds Force top commander Qassem Soleimani, during the commemoration of the 41st anniversary of the Islamic revolution in Tehran, Iran February 11, 2020. Nazanin Tabatabaee/WANA (West Asia News Agency) via Reuters.