Why It’s So Hard To Fix Lebanon’s Broken Government 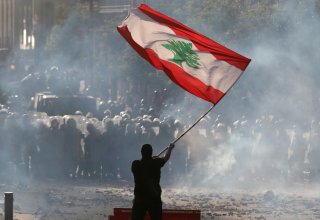 The devastating and fatal industrial explosion in Beirut in August coupled with an imploding economy renewed questions about Lebanon’s fate. Did the clock finally strike midnight on Lebanon’s deficient sectarian system? Will it mark the beginning of a new political system or an extensive overhaul? Or will Lebanon devolve into another civil war?

More than two months since the explosion and one year into the devastating economic crisis, neither is occurring. Lebanon’s current predicament is not improving, although neither is it worsening. It is going nowhere and will continue to go nowhere.

Lebanon is stuck. Demonstrations, sporadic violence, purported accountability and/or justice for the port explosion, a new government and early elections are pointless. They will only produce modest modifications, temporary adjustments, and/or superficial change.

A French-led initiative that makes an international bailout contingent upon political reforms is also floundering. Lebanese political leaders failed to meet their deadline for forming a new government necessary to fight corruption. In the wake of the missed deadline, Prime Minister-Designate Mustapha Adib resigned on September 26. France subsequently postponed the aid conference.

Nothing of significance will occur in Lebanon for the foreseeable future. Its sectarian dynamics, structures, and political culture of the last thirty years will prevail and remain largely untouched. However, unlike other Arab countries, violence, demonstrations, and the relative absence of a government will not descend into another Lebanese civil war.

The fundamental obstacle preventing a significant change in the status quo is Lebanon’s fractured nature. It is a curse for Lebanon at this juncture but also somewhat of a blessing because it is undermining movements for constructive change and preventing Lebanon from sliding into another civil war.

A fractured system and society

Lebanon’s power-sharing governing formula enables its many sects/religious communities to be represented in the parliament and the government. In theory, these parliamentarians and ministers arrive at mutually beneficial decisions—for their respective communities and Lebanon. In reality, the system amounts to horse trading, the establishment of domains, the absence of accountability, the lack of agreement, corruption, and an increasingly divided pie. Communities and elites prioritize their interests over the state which produces and reinforces a fractured country.

The Lebanese are particularly vulnerable to fracturing because they suffer from a weak conceptualization of national identity. Various religious and ethnic identities, and other affiliations challenge and compete with the Lebanese identity. In its most minimal form, it creates distrust and disagreement among Lebanese. In its most egregious form, fracturing forces Lebanese entities to seek out the assistance of external actors vis-à-vis other Lebanese.

Fracturing engenders and perpetuates many of Lebanon’s outstanding problems. The state is unable to establish sovereignty throughout its territory. The retention of weapons by Hezbollah is one glaring example. Governments exhibit repeated dereliction in their fiscal responsibilities. Lebanon’s debt to GDP ratio was 152 percent in 2019, the third highest ratio in the world. The state continues to fall short in providing the most basic of services. Electrical cuts, lack of water, and the absence of garbage collection and disposal are the norm, not the exception.

Problems became acute in the fall of 2019. The steady devaluation of the Lebanese lira resulted in rising food prices, increased unemployment, and the scarcity of hard currency. The COVID-19 crisis compounded this economic and fiscal crises. Ten months into these crises, a solution remains elusive. Negotiations with the International Monetary Fund (IMF) stalled. Others suggest that Lebanon look east (e.g. China) for assistance.

The August 4 explosion at the port only further exposed the incompetence of state authorities. In the wake of the blast, the government of Hassan Diab resigned in less than a week. A bad situation is much worse, but is it intolerable? Is it enough to produce systemic change in Lebanon? Or worse, another civil war?

The latest round of demonstrations in Lebanon started on October 17, 2019. Demonstrators called for the “toppling of the regime.” They cite among other issues, endemic corruption, the lack of economic opportunities, and the infringement of rights. The demonstrations triggered the resignation of Saad al-Hariri’s government and the eventual formation of a “technocratic” government to appease the demonstrators’ demands. The coronavirus, not a “technocratic” government, suspended protests. Protests are re-emerging. The paramount question is whether the protests will endure.

The problem which looms largest for the continued success of the October 17 movement is its cohesiveness. Can it maintain a united front/opposition/movement until there is credible change? Or will it fall victim to fracturing? The absence of leadership and answers to what constitutes its endgame greatly hinders October 17.

Questions abound regarding the nature of Lebanon’s future. Can a consensus be achieved as to what entails “toppling the regime?” Do a Beiruti and Tripolian desire the same outcome? Is the change of politicians sufficient? Should Lebanon’s sectarian representation be abandoned? What is the replacement?

The most recent example of fracturing occurred several years ago. The inability of authorities to remove and properly dispose of waste brought Lebanese from all walks of life and backgrounds out onto the streets in 2015. A civil society movement emerged during the protests that sought to disassociate from Lebanon’s sectarian identity and political establishment. The movement achieved surprising results vis-à-vis the sectarian-minded political establishment in the 2016 municipal elections.

The momentum generated by the strikes and the election dissipated by 2018. The movement became increasingly subjected to disagreement and divisions. Many of its adherents (e.g. Beirut Madinati) failed to unite and create a political party(ies) to maintain their transcendence of sectarian identity and contest the political establishment. Members of the movement were soundly defeated by a better organized and funded political establishment in the 2018 Parliamentary elections.

More than two years removed from those events, little evidence exists that the Lebanese figured out how to transcend or address their fractured nature and tendencies. The longer protests endure, the more likely they will become vulnerable to fracturing and lose strength. Considering the extensive set problems currently confronting Lebanon, fracturing is likely to be more numerous.

Although Lebanon’s history of civil wars looms large, Hezbollah’s willingness to use violence coupled with its arsenal and military experience makes it an unlikely outcome. Lebanon will not become another Syria, Yemen, or Libya. Demonstrations will not lead to a civil war. The power imbalance discourages the rise and maintenance of a genuine armed opposition. No entity in Lebanon, not even the Lebanese army, can realistically challenge Hezbollah’s power. Any opposition will be quickly and soundly defeated. History tells us so. Hezbollah defeated Lebanon’s internal security forces in West Beirut in 2008 in a matter of hours.

Some Lebanese are enhanced by a fractured society/political milieu and seek to perpetuate it. Hezbollah is the most obvious example; It thrives in it. Lebanon’s environment allows Hezbollah to participate in the government, but also operate independently of the state. In many ways, Hezbollah exists parallel to the state. This is explicitly demonstrated by the maintenance of a militia, decision-making, and other activities. In 2013, it’s militia openly entered the Syrian civil war in defiance of the Lebanese government’s call for a policy of disassociation. The political party/militia maintains extensive operations on the black market.

Any meaningful overhaul of the Lebanese political system or significant change to the state quo is a direct threat to Hezbollah’s current manifestation. An accountable, responsible, and efficient political system that prioritizes the nation over communities/political parties/elites cannot co-exist with Hezbollah. The organization’s militia and involvement in the black market would be eliminated.

Hezbollah will work to undermine or fight tooth and nail against any perceived threat to its relative freedom in Lebanon. Its willingness to resort to force is unquestionable. Although Hezbollah claims that its raison d’etre is to liberate Lebanese territory from Israel, Hezbollah has used its weapons on other Lebanese.

French President Emmanuel Macron took a prominent role in Lebanese affairs after the port explosion. Following two visits to Beirut, Macron promised an economic bailout for Lebanon’s ailing economy provided a new Lebanese government implemented reforms to fight corruption. The Lebanese failed to form a government by the required deadline. The French expressed betrayal by the failure, however chose not to abandon Lebanon and only postponed the donor conference.