Why Mahmoud Ahmadinejad Is Irrelevant in Iran 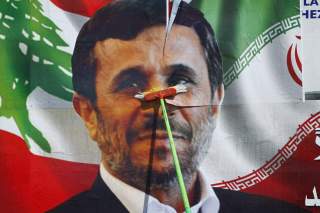 2018 was a busy year for Iran’s former president Mahmoud Ahmadinejad, who began a transformation from statesman to opposition leader. Ahmadinejad is trying to restore the popularity he lost during his second presidential term, especially following the Green Movement protests in 2009. The question is: will Ahmadinejad’s methods work or is he just a controversial has-been with good a good Twitter account?

After Ahmadinejad left office in 2013, he kept a low public profile for about a year. Starting in mid-2014 he occasionally criticized the Iranian government, but in late 2017, his public attacks on the government dramatically changed in form and intensity.

Ahmadinejad began his transformation in November 2017, following the detention of his assistant Hamid Baghaei over financial corruption issues. Ahmadinejad’s new stance peaked in February and March 2018, when he sent an open letter to Supreme Leader Ali Khamenei, demanding “fundamental reforms” in the three branches of Iran’s government—executive, parliament, and judiciary—as well as in the office of the Supreme Leader. Ahmadinejad provided few details about how to change the latter position.

In his message, Ahmadinejad also called for the release of political prisoners and the dismissal of the Judiciary Chief, Sadeq Larijani, who recently sent three of Ahmadinejad’s assistants to prison.

These men were convicted of various charges. His former vice president, Hamid Baghaei, is currently serving a fifteen-year sentence over corruption charges, while his successor, Esfandiar Mashaei, has been sentenced to six and a half years in prison after being convicted of endangering national security. Ahmadinejad’s former media consultant, Ali Akbar Javanfekr, had been previously sentenced to a year in prison on charges of publishing materials contrary to Islamic norms.

The most significant thing about Ahmadinejad’s letter was that it was signed by over three-hundred student activists and religious activists from organizations affiliated with the fundamentalist camp, the most loyal supporters of Khamenei.

Some of the signatories, who are members of the Iranian Hezbollah movement (hardline supporters of Khamenei) sent another message to the Supreme Leader on April 14, 2018. In this message, the signers expressed their worries concerning the future of the country and highlighted the gap between the authorities and people, which has reached its worst state since the Islamic Republic’s founding forty years ago.

The group criticized the IRGC (Islamic Revolutionary Guard Corps), saying that it “protects the rulers and powerful gangs instead of the country and pressures and imposes limitations on political and media activists.” On March 18, Ahmadinejad sent two letters to Khamenei demanding the cessation of the IRGC’s interference in the economy.

Ahmadinejad did not stop at this point but continued to press the IRGC more. On January 14, 2018, he sent a letter to Qassem Suleimani, commander of the IRGC’s elite Quds Force, which was described as “strange” by the local media. Ahmadinejad denounced Sulaimani’s recommendation that the authorities release the brother of Iranian Vice President Eshaq Jahangiri, charged with financial corruption.

The week prior, on January 9, Ahmadinejad sent a request to the Interior Ministry asking them for a permit to organize a protest in Tehran over the “policies and performance of officials and the way the country is managed by different branches.” Ahmadinejad made his request despite being well aware that the Iranian authorities have never given a permit to a protest since the Islamic Revolution in 1979.

Ahmadinejad has not only attempted to transform his political image but also the perception of him on social matters. He has tried to appear more concerned with human rights, which he was accused of violating during his time in office.

From the moment Ahmadinejad came to power, the treatment of detainees worsened in Evin prison and in detention centers, according to Human Rights Watch. Ahmadinejad said in 2009: “In some detention centers inappropriate measures have taken place,” but he accused “enemy agents” in these centers of doing this.

In his letter, Ahmadinejad condemned the IRGC, which he accused of carelessly detaining people, killing them in custody, and then claiming that they were drug addicts who had committed suicide.

Ahmadinejad is also very active on social media, engaging with even seemingly minor debates in other countries. He tweeted in support of Serena Williams during her dress code controversy at the French Open 2018 and defended former NFL player Colin Kaepernick throughout America’s debate over kneeling during the national anthem.

This appears to be a bid from Ahmadinejad to get closer to the youth sector despite the fact that most Iranians who took the streets against him in 2009 were young.

It is worth mentioning that Ahmadinejad banned Twitter during the 2009 uprising. He created an account in March 2017 in a failed attempt to run for the presidency, which was rejected by Iran’s Guardian Council. ِ

Ahmadinejad’s intentions are not yet clear, but the most logical speculation is that he is trying to establish a new conservative current with his close circle (Mashaei, Baghaei, and Javanfekr), against the reformers in power and those figures close to Khamenei.

Perhaps Ahmadinejad’s primary goal now is to avoid his friends’ fate, given that he stands accused of misusing $2 billion during his term in office.

Has Ahmadinejad restored some of his popularity? It is difficult to assess, especially since there are no public polls on this issue. However, it is known among Iranians that Ahmadinejad’s popularity is concentrated in rural areas. In the big cities, where people have more access to politics and media, his popularity is much weaker.

Ahmadinejad’s popularity among youth has probably not improved much, as university students have not forgotten his record in dealing with them. In January 2018, Shiraz university students protested over the appointment of Gholamreza Rakhshandeh as a Cultural and Student Deputy of Shiraz University. Rakhshandeh was appointed during Ahmadinejad’s administration, and he purged the reformer members from university board, polarizing the students.

Furthermore, if Ahmadinejad’s growing popularity did represent a real threat to Khamenei and the Islamic Republic, the Supreme Leader would not wait so long to send Ahmedinajed to join his friends in jail. In a speech in December 2017, Khamenei hinted to Ahmadinejad, “The people understand, and they don’t accept this situation. Any child can take a stone and throw it at windows, this is not an art, it is unthinkable that a man has all the power in his hand during a decade and then becomes an enemy in the next decade.”

In another speech delivered in August 2018, Khamenei said: “Some say that ‘we are defending the weak and we want to fix the situation’...they are not aware of themselves, but they are working in the framework of our enemy’s plan.”

Some Iranian analyses suggest that Khamenei’s phrase: “they are not aware of themselves” refers to Ahmadinejad’s movement.

Khamenei’s phrase indicates that the Supreme Leader does not see Ahmadinejad’s moves as an attempt to overthrow the Islamic Republic. Instead, Khamenei excused him by saying that Ahmadinejad is unaware of the implications of his actions. Additionally, Khamenei referred to Ahmadinejad’s limited popularity in saying, “the people understand, and they don’t accept this situation.”

Have Ahmadinejad’s varied methods been successful? Ahmadinejad still cannot take to the streets without permission from the Interior Ministry and a license from the Supreme Leader. He is unlikely to risk ending up like his friends and opponents who were arrested after the Green Movement in 2009.

Mehdi Karroubi and Mir-Hossein Mousavi, Iranian presidential candidates in the 2009 elections and leaders of the 2009 uprising, have been under house arrest for nearly a decade. Over that time, Karroubi and Mousavi sent a number of letters and conducted a hunger strike, none of which produced any discernible impact on Khamenei.

In light of this, it is highly unlikely that Ahmadinejad’s letters will present any pressure on Khamenei, especially considering that Ahmadinejad’s popularity among younger Iranians is much less than that of either Karroubi or Mousavi.

Ahmadinejad will probably continue to concentrate his fire on the IRGC and the government, including his main two foes, the Judiciary Chief, Sadeq Larijani, and Ahmadinejad’s old rival, the current president, Hassan Rouhani.

Despite his efforts, it seems that Ahmadinejad is alone after the imprisonment of his friends. No prominent political actors support him anymore. He has lost Ali Khamenei, who rescued him in the 2009 uprising by ordering the IRGC to take to the streets and suppress the protests. Socially, Ahmadinejad’s efforts have not led to any significant change, as no protests have been organized demanding the release of his friends (who are not popular among the Iranian people). Despite his fame and his tweets, Mahmoud Ahmadinejad is likely to remain an irrelevant political figure in Iran.