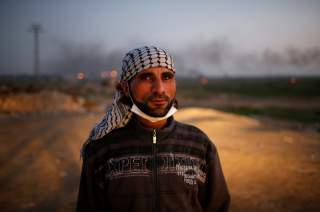 Palestinian leaders anxiously await the end of the Trump administration, outraged by President Donald Trump’s “Peace to Prosperity” vision for Israeli-Palestinian reconciliation. Palestinian Authority President Mahmoud Abbas has already said “a thousand times no.” If Abbas can just wait out what he artfully calls the “slap of the century,” then perhaps the political winds from Washington will be more favorable to the Palestinian cause. To say the least, this is a risky bet. If Abbas wants to further his people’s aspirations for statehood and human flourishing, then he should take the deal as a starting point for negotiations. Palestine needs security and economic development—the parameters of Trump’s plan are essential to achieving this.

To ensure a viable Palestinian state, time is of the essence. The vision proposes a Palestinian state in around 70 percent of the West Bank, several neighborhoods in East Jerusalem, most of Gaza and some parts of southern Israel, on the condition that the Palestinians disarm Hamas, establish accountable governance, and recognize Israel as a Jewish state. Israel will be permitted to annex communities in the West Bank and uphold overriding security responsibility from the Jordan River to the Mediterranean.

Under the Trump deal, Israel would agree to a four-year freeze on settlement expansion in the territory, which will comprise the envisioned Palestinian state. In 2019 alone, Israel advanced plans to build 9,413 settlement homes, about the same amount as in the previous two years. According to Interior Ministry data, the annual population growth rate of West Bank settlements is well above that of the rest of the Jewish state. Last year, the population of Israeli communities east of the Green Line rose by over 3.1 percent, while Israel’s overall population increased by 1.9 percent. In 2018, the growth rate for Jews in the West Bank was 3.5 percent, almost double the national rate. As these Jewish communities expand, the possibility of a contiguous Palestinian state becomes less and less likely. Thus, it is crucial for the Palestinians to come to the negotiating table as soon as possible to take advantage of the historic freeze. This is likely the last moment before the situation becomes irreversible.

And Abbas and the Palestinians can’t merely rely on hope to implement political change in Washington. An overwhelmingly large majority of the Knesset, roughly 85 percent, has embraced Trump’s plan. Leader of the centrist Blue and White Blue party, Benny Gantz, praised the deal and said he would implement all conditions if elected prime minister. This has become a benchmark for negotiations, with only the small minority of Arab and left-leaning parties rejecting it—the odds of a radically different plan gaining traction is unlikely given the country’s voting trend in which the left has seen a precipitous decline since the 1993 signing of the Oslo Accords. In the current Israeli political climate, this is the best starting point the Palestinians could get. A Democratic administration could theoretically pressure Israel more but what kind of stick could it really hold? Russia, China, Europe, and the Arab states are consumed with more urgent crises at home and abroad to press on this seventy-three-year-old issue. Obama was left empty-handed after eight years tilting to the Palestinians in pursuit of a deal.

Today, the international community is struggling to address the worst refugee crisis in nearly seventy years. Almost 70.8 million people are forcibly displaced, double the level of twenty years ago. The United Nations estimates that 168 million people will need humanitarian assistance in 2020, costing relief agencies $29 billion. Fresh conflicts and catastrophes in Syria, Sudan, Yemen, South Sudan, Somalia, and the Democratic Republic of Congo are driving the demand.

While the plan’s security measures may limit elements of Palestinian sovereignty, granting Israel superseding security control is sine qua non, not just for the safety of the Jewish state, but for the integrity and preservation of a Palestinian one. As regional events in the past decade have shown, governments in transition or in nascent form too often get hijacked by sectarianism or radicalism—the Palestinians are no exception to this rule. In fact, Hamas’ rise in Gaza after Israel’s 2005 withdrawal is a case in point.

Shortly after the Palestinians elected Mahmoud Abbas in 2005, the Fatah–Hamas conflict erupted, leaving over six hundred Palestinians dead from factional fighting in just one year. Elections have not been held in the Palestinian controlled territory since.

In the past year alone, Shin Bet security services have thwarted over 560 imminent terror attacks, including suicide bombings, kidnappings and upwards of three hundred shootings, a slight uptick from 2018. All the while Israel partially controls security in the West Bank and collaborates with the Palestinian Authority. Imagine what would unfold if Israel completely withdrew. It’s no secret that the Palestinian Authority cooperates with Israeli forces because it serves the authority’s stability as much as Israel’s—they understand that radical elements strive to overthrow the Palestinian Authority as well. Palestine needs Israeli intelligence and know-how to preserve the integrity of its state, especially at a time where over a dozen rival Islamist factions operate across the territories, and transnational terror movements such as Al Qaeda and ISIS are seeking, and succeeding, to infiltrate. An Israeli foothold in security and border issues will prevent chaos from erupting.

With safety covered, Palestinians will be able to focus on tackling corruption (over 80 percent of Palestinians consider their leaders corrupt), bolstering institutions of self-government, safeguarding the rule of law, and nourishing the civil society necessary for a thriving democracy.

Another prerequisite for a flourishing state is economic prosperity. Indeed, unlike previous plans, this proposal facilitates $50 billion in new investment over ten years, projected to more than double the Palestinian GDP, generate over one million new jobs, slash the poverty rate by 50 percent, and reduce the rate of Palestinian unemployment to single digits. Whether this works as projected, $50 billion is a significant infusion of cash for a territory desperately in need of it. Currently, unemployment is high at 26 percent, the Palestinian Authority faces a fiscal crisis, and the World Bank expects the thus stagnant GDP in Palestinian territories to slip into negative growth in 2020 and 2021.

In 1947, Arabs rejected the United Nations Partition Plan separating the British Mandate of Palestine into two states, one Jewish and one Arab. Arabs subsequently waged war against nascent Israel. Since then, Palestinians have spurned peace offers in 1967, 1993, 2000, 2008, and 2014. Only in 2011 did Abbas admit rejecting the 1947 proposal was a “mistake.”

As the world becomes ever more preoccupied with other problems—Syrian refugees, the rise of China, the nuclear weapons race, Iranian expansion, among many others—and Muslim states continue to normalize relations with Israel, it would serve the Palestinian cause to use this plan as an opportunity to engage and embrace this vision as a malleable blueprint for negotiations. Given global trends and facts on the ground, there’s no guarantee a future will hold something better for them.

Eliora Katz is a Middle East analyst at a think tank in Washington, DC. She was previously a Bartley Fellow at the Wall Street Journal.

Eyal Tsir Cohen is a visiting fellow at a think tank in Washington, DC. Eyal led a career in the Israeli civil service for the last thirty years in various senior positions focusing on counterterrorism and national defense strategies.