Why the United States Should Support the Iraqi Women’s Movement 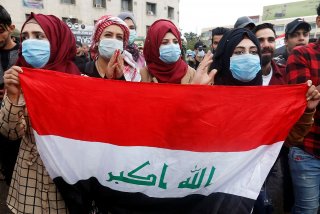 As protesters once again take to Iraq’s streets to demonstrate against endemic corruption, unemployment, and the failure of the state to provide public services, Iraqi women are playing a leading role. Women have been central to the popular uprising that began last October and are demanding real change. Washington should listen carefully, and help where it can, because there can only be progress in key areas like social integration, economic development, and even national security if Iraqi women first gain their basic rights. The future of the country depends on nothing less.

In the face of the government’s failure to create jobs, ensure economic stability, and instill confidence in its leadership, young Iraqis took to the streets in October 2019 to demand governmental reform, more job opportunities, and better public services. As the demonstrations gained momentum, Prime Minister Adil Abdul-Mahdi resigned at the end of November and was eventually replaced, after months of horse-trading and several failed candidates, by Mustafa al-Khadimi in May 2020. Several months on, al-Khadimi is still trying to win the support of the Iraqi public, but at least for now, he seems to be on a more promising path than his predecessors.

The protests that broke out in October 2019 were by no means the first anti-government demonstrations to arise in the country in recent years, and indeed, they have been a recurring theme in Iraq over the past decade. What is unique and significant about the current protests, however, is the role that women have taken on in the movement. Women’s participation has evolved from calls for government reform to a broader social revolution demanding justice and equality. Many of the protesters are young, liberal Iraqis and women have been welcomed by their male counterparts, who have stood side by side with them while calling for change. Their acceptance and key role in the movement has also shown Iraq’s leaders that the younger generation is ready not only for a change in government, but also in the older generation’s conservative mindset.

“We want a homeland”

As more women from various backgrounds and political orientations joined the movement, the hashtag #نريد_وطن (“We want a homeland”) and slogans such as “We are the nation, who are you? I am the revolution” began trending on social media. As a population that has long felt excluded from parts of Iraqi life and experienced the devastating effects of sectarian strife, women found in the protest movement an opportunity to take on a greater role and express their desire to become valued participants in society, no matter their religious sect or ethnic background. After many years of sectarian conflict in Iraq, this shared goal could help to foster reconciliation.

In addition to holding signs with revolutionary slogans, women donned the colors pink and purple while protesting. Some wore head covers, others put on jackets or shawls, and many wore yashmagh—scarves that are traditionally part of men’s outfits in several Middle Eastern countries. This small but significant act of blending feminine colors with the masculine yashmagh has made this one piece of cloth a reference for both genders and a sign that Iraqi women and men, in their plural performativity, have composed a single body advocating for social, economic, and political justice.

Nevertheless, religious conservatism remains a major barrier that continues to hold Iraqi women back from securing leadership positions, taking on jobs in male-dominated fields, and even gaining access to a high-quality education. Opposition to women’s involvement in the protests has also been voiced on religious grounds. The influential Shiite cleric, Muqtada al-Sadr, tweeted that the mixing of genders during the protests was immoral and claimed that protesters were using drugs and alcohol. This effort seems to have backfired, however, and al-Sadr's objections arguably only increased the protesters’ support for the women’s movement even further. The younger generation has shown that they are tired of this conservative mindset and the sectarian lines that are drawn along with it, and their challenge to the long-held status quo regarding the role and position of women and girls in Iraqi society is likely to continue throughout the protests.

In addition to the challenges presented by religious conservatives, the coronavirus pandemic has created a new wave of difficulties for Iraqi women. Demonstrations around the country stalled as stay-at-home orders were put into place. Lockdowns and curfews exacerbated existing inequalities toward women. Cases of domestic violence and gender-based violence rose. A domestic violence bill that would give abused women and children more rights, require the state to build adequate shelters, and establish specialized courts for family violence has been put on hold. Iraq is just one example of how women around the world are being unequally affected by the pandemic.

Protesters thought that the pandemic would hurt the protest movement, slow its momentum, and cause government leaders to forget the urgency of their demands. While there was a pause in the protests, after the government called off the strict stay-at-home orders, people put their masks on and went right back to the streets. This commitment is likely to continue until the government shows that it is willing to make significant changes.

An essential step in building a more stable Iraq

Ensuring women’s equality is an essential step that Iraq needs to take to create a more stable society free from sectarian conflict, economic turmoil, and the influence of outside governments. When women have safety, equal opportunities, and equal access to a quality education, they are more active participants in society. This is likely to result in more women voting and running for office, greater representation of women, and more support for women’s issues. In time this will likely lead to the overturning of ultra-conservative and unjust laws that not only take rights away from women, but also promote sectarianism.

Empowering women is not just about human rights, it is also crucial to ensuring Iraq’s future economic prosperity. According to the UN, women’s economic empowerment boosts productivity and income equality, increases economic diversification, and leads to other positive development outcomes. It is also good for business: Research suggests companies greatly benefit from increasing employment and leadership opportunities for women, which is shown to boost organizational effectiveness, growth, and performance across the board. As Iraq continues to struggle with high unemployment rates, empowering women and ensuring their equality will likely have a positive impact on the country’s economy and future growth trajectory. Less than 15 percent of women work in Iraq at present, among the lowest rates in the world. According to the World Bank, a sustained increase in female labor market participation of five percentage points would boost Iraq’s annual economic growth by 1.6 percentage points.

Where does Washington fit in?

Washington’s support for a women’s revolution in Iraq can be beneficial to the movement, but only if it is carried out in the right way. One of the protesters’ main demands from the beginning has been the elimination of foreign influence in Iraqi politics. Given its history in Iraq, the United States has to be especially careful of not overstepping and interfering in Iraqi affairs, which would only shift the focus from the success of the women’s movement to the United States’ involvement in yet another Arab nation’s internal affairs.

Through quiet diplomatic collaboration, Washington has the ability to help Iraqi women without overstepping. By working with women in government or other leadership positions, the United States could help legitimize sectors that are struggling to gain traction internally. Support for Iraqi NGOs that are working to advance women’s rights would make them more impactful in their efforts. Leadership training, professional empowerment, and financial education are all likely to lead to more women succeeding when they are put in positions of power.

There is no question that human rights are still being threatened in Iraq as long as women suffer from government discrimination, economic inequality, and societal shame. Advancing women’s status in the country is long overdue, and it will help to build a safer, freer, and more prosperous Iraq in the years to come. It is in the United States’ best interest to help the women of Iraq in this crucial moment.

Caitlyn Perkins is currently serving as a Research Assistant at the Middle East Institute.