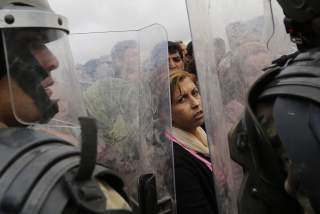 Earlier this month, President Donald Trump ended U.S. support for Kurdish forces in Syria. “Let Syria and Assad protect the Kurds” he tweeted, abruptly abandoning an alliance that had taken shape during the Obama administration and eventually led to the battlefield defeat of ISIS.

Trump’s decision ignited a debate over whether the United States is leaving Syria altogether. Even the president seems to be vacillating, at times saying all U.S. forces were coming home and at others indicating that they would move to Iraq or even a different part of Syria. But whatever the final disposition of the U.S. military one thing is clear: the way the relationship with the Kurds ended could undercut the American approach to irregular warfare.

The United States first became involved in irregular warfare in a big way during the 1960s. After Vietnam, it fell out of use but was revived in the 1980s when a number of Soviet client states emerged in what was then called the Third World and again after the September 11 attack demonstrated the danger posed by transnational networks of terrorists and insurgents. As the 2010 Joint operational concept explained, “To prevent, deter, disrupt, and defeat irregular threats, the U.S. military applies some blend of counterterrorism, unconventional warfare, foreign internal defense, counterinsurgency, and stability operations.”

“Unconventional warfare” which, in the Department of Defense’s wooden phrasing, consists of helping “a resistance movement or insurgency to coerce, disrupt, or overthrow a government or occupying power” (is the most problematic component of irregular warfare. While several U.S. government agencies and elements of the military have been involved in it, it has long been a specialty of Army Special Forces. But, as the Syrian fiasco shows, the problem lies not with the mechanics of unconventional warfare but with its broader political and strategic context.

Beginning with support to the Montagnard tribesmen of Vietnam’s central highlands during the 1960s, the United States has used unconventional warfare when it felt compelled to do something against an opponent but was unwilling or unable to undertake a large-scale involvement. Its heyday was the 1980s when the Reagan Doctrine led the United States to back insurgents fighting against regimes aligned with the Soviet Union, from the Contras in Nicaragua to UNITA in Angola to the Afghan mujahedeen.

Afghanistan demonstrated the great risk of unconventional warfare: it might help bring down a hostile government, but insurgents were seldom able to govern. If the United States and the rest of the international community were unwilling to undertake stabilization and provide significant support, then the likely result was chaos and continued conflict. In Afghanistan, the overthrow of the Soviet-backed government unleashed a devastating civil war that eventually created operating space for Al Qaeda. Unconventional warfare, in other words, risks “catastrophic success” where the existing government is defeated but no system of order replaces it.

Unfortunately, the United States failed to learn this lesson from Afghanistan; now Syria is following the same grim pattern. Reliance on unconventional warfare helped defeat ISIS and, for a time, kept Syrian government forces out of the predominantly Kurdish regions. But the United States was never willing to go all in to stabilize northeastern Syria. The likely outcome will be increased internal conflict, increased humanitarian disaster, and possibly the reemergence of ISIS. And, importantly, future irregular movements in other places will be loath to rely on a demonstrably undependable United States if at all possible.

What then is the future for unconventional warfare in American strategy? There are three viable options. One would be for the Syrian fiasco to lead U.S. policymakers to conclude that the ethical costs and strategic risks of unconventional warfare do not justify the benefits, and thus abandon it altogether or, at least, to only turn to it in the direst of circumstances like a large-scale conventional war with another world power. A second option would be to adjust America's strategy to specify that the United States will only use unconventional warfare when it is willing to stabilize and develop a region or nation once its irregular allies win. The third and, tragically, most likely is to simply ignore the lessons of Afghanistan and now Syria, continuing to rely on unconventional warfare when Washington wants to do something to vex an enemy but is unwilling to seal the deal with a major commitment.

After Syria, chances are that only the most desperate irregular forces will cast their lot with the United States. So, if America continues to treat unconventional warfare as a cheap way to weaken adversaries with a limited commitment, then the outcome will yield sordid alliances with ever more unsavory partners producing more threats than they resolve.

Steven Metz is a research professor at the U.S. Army War College Strategic Studies Institute. This essay is solely the work of the author and does not represent the official position of the US Army War College or US Army.