Will the Afghan Army Disintegrate After U.S. Withdrawal? 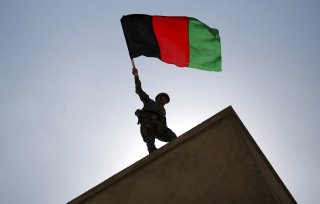 As the United States starts to pull out its troops from Afghanistan, its Afghan allies—primarily the Afghan army—are left to fend for themselves. While for the time being the Afghans are reassured of continued U.S. assistance, there’s little reason to believe the U.S. will keep its word. Once U.S. troops pull out completely—which is expected to happen by June 2021—the Afghan army’s fate will hang in the balance.

Since 1880, Afghanistan has tried three times to build a national army from scratch. All three attempts have been made with assistance from a major foreign power. When Amir Abdur Rahman Khan came to power in 1880, he needed a strong army to crush his opponents and restore order. Since Abdur Rahman Khan lacked the resources and funds to raise and maintain an army, the British came to his rescue. With British annual subsidies and arms supplies, Abdur Rahman Khan built a hundred thousand strong army.

Left alone by both the British and Russians to handle his domestic affairs (while the British retained control of his external affairs), Abdur Rahman began conquering all of Afghanistan. He used his well-supplied army to full effect, even conquering what Mahmud of Ghazni and Taimur Beg had failed to conquer: Kafiristan, the land of non-believers, in eastern Afghanistan. As Islam was introduced to Kafiristan, the Amir Abdur Rahman changed the region’s name from Kafiristan to Nooristan, the land of lights.

After Abdur Rahman (died in 1901), Afghanistan’s new Amir Habibullah Khan continued his father’s policy to allow the British to have control over Afghanistan’s external affairs. In response, the British continued to provide the Amir with annual subsidies and arms for the Afghan army. Except for suppressing minor revolts, during Habibullah Khan’s era, the Afghan army didn’t see much action since Abdur Rahman had rooted out most opposition to the throne.

After Habibullah’s assassination in 1919, his successor, Amanullah Khan, went to war with the British to reclaim Afghanistan’s independence. Having reclaimed Afghanistan’s independence, Amanullah lost British subsidies and arms supplies to the Afghan army. It was a turning point in Amanullah Khan’s era, as the Afghan army started shrinking. With the passage of time, the hundred-thousand-soldier army, which the Amir’s grandfather had raised, was reduced to a mere fraction of its former size. When a rebellion broke out in 1928-29, Amanullah’s weakened army couldn’t defend him. He fled.

Having toppled the rebel leader Habibullah Kalani (not to be confused with Habibullah Khan) using tribal militias in 1929, Nader Khan started rebuilding the Afghan army. This was Afghanistan’s second attempt in 50 years at building an army. The Afghan army, however, remained in rudimentary conditions until the 1950s, when the Soviet Union starting investing in it. Afghan officers were sent to the Soviet Union for training, and the Afghan army was equipped with Russian weapons. Having trapped Afghanistan in its sphere of influence, the Soviet Union invaded it in 1979 to prevent the Mujahedin from overrunning Kabul.

During its occupation of Afghanistan, from 1979 to 1989, the Red Army did much of the fighting there. After its 1989 withdrawal, the Soviet Union kept pouring billions of dollars into Afghanistan to prop up the Najibullah regime. Continued Soviet assistance was the underlying reason for Najibullah’s survival for more than three years after Soviet withdrawal. When the Soviet Union’s successor state, Russia, cut off aid to Afghanistan on January 1, 1992, the Najibullah regime collapsed in less than four months.

Having replaced the Najibullah regime, the Mujahedin dispensed with the sixty-year-old Afghan army. The inexperienced Mujahedin regime could not afford to maintain, supply, and pay a large conventional army, whose only lifeline had been foreign assistance. During the following decade, as Afghanistan lacked a national army, different Mujahedin warring factions—and later the Taliban—used their ragtag militias to settle scores.

With the installation of the interim Afghan administration led by Hamid Karzai in late 2001, plans were drawn up for a new Afghan army. Since early 2002, with U.S. assistance, the Afghan army’s numerical strength has reached a hundred and eighty thousand. The U.S. has spent nearly $100 billion on Afghan security forces, of which the army is the main component. The Afghan forces annually cost the U.S. taxpayers $5 billion, expected, unrealistically, to continue through 2023.

Now, as the Afghan government remains financially incapable to fund its army, after the U.S. withdrawal one of the following three scenarios is likely to unfold. In the first scenario, the United States will cut off funding for the Afghan army, and the Taliban and the Afghan government will not reach an agreement to share power, in which case the Afghan army will disintegrate within a few months. The vacuum will be filled by regional warlords and their militias, backed by their foreign supporters.

In the second scenario, the United States will cut off funding for the Afghan army, but the Taliban and the Afghan government will reach an agreement. The Afghan army will be downsized from its current numerical strength of 180,000 to about 30,000 to 50,000. Some Taliban fighters and commanders will also be integrated into the Afghan army. Finally, the army personnel’s monthly salary will be slashed to the point where it’s not a burden on the Afghan economy.

In the third scenario, the United States will continue funding the Afghan army, albeit in a much-reduced fashion, to prevent its disintegration and the Taliban and the Afghan government will reach an agreement. Like the second scenario, the army will be downsized to around fifty thousand, some Taliban fighters and commanders will be integrated into the Afghan army, and the army personnel’s monthly salary will be slashed.

If the Afghans don’t demonstrate political maturity and foresightedness, then their actions will lead to the disintegration of the Afghan army for a third time in a century.

Arwin Rahi is a former adviser to the Parwan governor in Afghanistan. He has written for the National Interest, Forbes, BBC Persian, the Diplomat, Dawn, the Express Tribune and others. He can be reached at [email protected].