Will Change Finally Come to Iran? 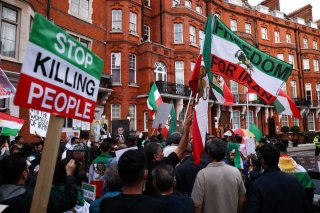 The people of Iran have been courageously protesting against the clerical regime for the past fifty-three days. The persistence of the uprising has given people a real sense of empowerment and optimism. The belief is cementing for many that the regime's days are numbered, and overthrow is finally within reach. Even if some argue that it's still too early to predict the outcome, these developments are a clear game changer. The international community should immediately update its policies accordingly.

The extraordinary and unprecedented uprising conveys the increasing power of the population against a decadent theocracy. This is a pivotal moment for Iran, the Middle East, and the world community, all of which have long suffered from the regime's viciousness, terrorism, regional adventurism, and nuclear threats. Now is the time for a change.

The world can no longer ignore the theocracy's abysmal human rights record. Thanks to decades of brave resistance by the Iranian people, and particularly women, many in the international community are now alive to the fact that these people have a legitimate right to overthrow a cruel, tyrannical regime that continues to massacre its people—as it did in 1988 when political prisoners were murdered en masse. The world should finally abandon a policy that has appeased the mullahs in Iran for four decades, unnecessarily extending their unbelievable reign of terror.

There is convincing evidence that the regime is losing the battle with the Iranian nation. Among the most persuasive is that massive demonstrations erupted less than 24 hours after the regime’s highest authority, Supreme Leader Ali Khamenei, issued his boldest warning yet to intimidate the population into submission.

Yet people in many cities, including Tehran, Karaj, Shiraz, Tabriz, and Arak, defied Khamenei’s warnings and took to the streets with even more ferocity than before, torching security force vehicles and burning pictures and posters of Khamenei. Protesters clashed with security forces in scenes that have become normal these days.

The latest protests defied threats by another linchpin of the regime's authoritarian character, Commander-in-Chief of the Islamic Revolutionary Guard Corps (IRGC) Hossein Salami. The IRGC is now leading the suppression. Salami had claimed that the protests had been dealt with and everything was under control. His mentality cannot be dismissed as the musings of a fanatic out of touch with reality. They are more signs of sheer desperation of a regime in deep trouble.

Khamenei and Salami are the most powerful duo within the establishment. So, the regime pulled its aces, but protesters refused to be intimidated. That should be terrifying the regime's supporters and suppressive forces.

The uprising has now spread to more than 216 cities and cuts across all sectors of society, even high school students, who are showing remarkable political courage and consciousness.

Contrary to some rudimentary narratives, the IRGC is heavily involved in the suppression. But, its forces are exhausted and demoralized. Recently revealed orders by the IRGC's top brass, including Salami, to quickly crush the persistent protests are perhaps the best illustration that the suppressive machinery is running out of gas.

According to religious and cultural rituals in Iran, people mourn the fortieth day of a person’s death. This ritual is a nightmare for a regime that has killed over 530 protesters. Every murdered protester’s funeral becomes a rallying cry, ensuring the protests’ longevity and further eroding the regime forces’ confidence and morale.

The international community should go beyond verbal condemnation and even symbolic sanctions. All European nations must recall their ambassadors from Tehran. Diplomatic ties need to be severed immediately. International mechanisms to hold the regime accountable for its crimes must be activated. The global community must recognize the rights of the Iranian people to use any means available to defend themselves against state crackdown.

The winds of change are blowing in Iran. The world must embrace it.