Will China’s Pivot to the Middle East Pay Off? 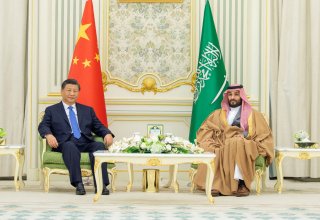 Chinese president Xi Jinping completed a three-day trip to Saudi Arabia on December 9 as part of an official Saudi-Chinese summit and a China-Gulf Cooperation Council (GCC) meeting. Meetings with more than thirty heads of state and top entrepreneurs were held, allowing the world to witness an emboldened China forging better relations with some of America’s top partners, especially Saudi Arabia. Xi was given the royal welcome and came with ambitions to increase China’s role by strengthening relations not only with Saudi Arabia but with the whole Arab world. It was a far cry from President Joe Biden's humble visit to the kingdom in July.

The impact of Xi’s trip can best be understood by assessing how it was interpreted by those who live within the borders of the Arab League. This starts with understanding Xi’s itinerary and where China-Arab relations are headed.

Who Did Xi Meet?

As Xi’s plane landed on the tarmac in Riyadh, he was greeted by officials of the largest Arab monarchy, and later met with its official head of state, King Salman, and Crown Prince Mohammed Bin Salman (MBS) at the Al Yamamah Palace. Xi started by stating that he was happy to return to the kingdom after six years and revealed that he could vividly recall his last trip in 2016. He took the opportunity to convey his gratitude for developments in China-Saudi relations and described Saudi Arabia as an essential partner in a multipolar world, specifically when it comes to energy security.

Indeed, oil is Saudi Arabia’s prime commodity on the global market and China is the second-largest global consumer. In fact, Xi said his country “will continue to import large quantities of crude oil from GCC countries,” even as he signed a series of agreements with Gulf partners, including investments in various energy technologies, such as hydrogen and renewable sources. As reported by Reuters, Xi plugged the Chinese yuan to his GCC partners by telling them to utilize the Shanghai Petrol and Gas Exchange as a potential alternative to the American dollar for oil and gas sales, leading some to expect a forthcoming official announcement that the Gulf could shift from the dollar to the yuan for fossil fuel purchases. So far, the petrodollar has not been abandoned and is unlikely to be soon.

While pursuing a new chapter in Saudi-Chinese relations, Xi also met with other heads of regional countries who were eager to enhance their ties with Beijing.

One of Xi’s notable meetings was with Lebanese prime minister Najib Mikati. Both leaders shared a willingness to deepen their already congenial relationship. Beijing has long supported the sovereignty and independence of Lebanon, and Xi vowed to continue his country’s efforts to protect the national security and stability of the Lebanese people. Mikati thanked Xi, sharing his view that China has accomplished remarkable achievements under his tenure. They welcomed the idea of cooperating in industries such as electricity. Lebanon currently suffers from chronic energy shortages and has not had stable electricity supplies for decades. The ailing Lebanese power sector can benefit enormously from Chinese expertise, and Xi mentioned his readiness to deepen his cooperation with Lebanon in the Belt and Road Initiative (BRI). Mikati also acknowledged and endorsed the one-China principle.

Xi then met with Palestinian leader Mahmoud Abbas and highlighted the historical friendship between their peoples, which reached its thirty-fifth anniversary this year. The two leaders discussed ways to increase cooperation in areas like tourism and free trade and the possibility of expanding economic activities to improve living standards for Palestinians. Xi also talked about the need for a two-state solution to the Israeli-Palestinian conflict based on the principle of “land for peace,” whereby Israel would give up the territories it captured in the 1967 Six-Day War—the West Bank, the Gaza Strip, and East Jerusalem—allowing the Palestinians to have their own state. It should be noted that the Chinese government has also provided large shipments of Covid-19 vaccines for Palestinians in the occupied territories, including to refugees in the diaspora.

But it is not only the Arab-speaking Middle East countries that are showing appreciation for Beijing. Algerian prime minister Ayman Benabderrahmane, too, broke bread with Xi and emphasized the traditional affection that has bound China and North African Algeria since the Cold War. Xi commented that the foundation of China-Algeria relations is solid, adding that Beijing was preparing to expand cooperation on numerous BRI projects, including in energy, mining, and infrastructure.

Although China is popular among Arab leaders and business elites, there is a notable difference when it comes to assessing the opinions of the citizenry. Nevertheless, China has grown slightly in popularity in the Arab world when compared to the United States. According to a 2021-2022 Arab Barometer survey, many Arabic-speaking countries favor better economic ties with China over better economic ties with the United States. Many supporters of closer relations with China are from older generations. One example is Tunisia, where 63 percent of people between the ages of fifty and seventy-five prefer having stronger economic relations with China. However, people under fifty years old are more likely to want closer cooperation with America. Nevertheless, Beijing is working relentlessly to show the Arab world that it is a friend and is prepared to go the extra mile to prove it.

China’s decision to endorse a statement made by the GCC regarding three contested islands with Iran in the Persian Gulf—a dispute that goes back to the early 1970s—is likely to further bolster Beijing’s popularity. Although this has provoked backlash from Iran, another Chinese partner, it is notable that China does not condone Iran’s nuclear activities or its support for militancy in places such as Yemen.

The Impact on U.S. Regional Relations

The question is: to what degree and how? China is still in the initial stages of cultivating a powerful alliance with the Arab countries when compared to America’s long historical presence, which is deeply entrenched and bonded by years of blood and treasure. Despite the public spat between Washington and Riyadh, both still need one another. Yet Xi’s trip exemplified how the Arab Gulf states have options. Xi’s reference to the “multipolar world” when describing Saudi Arabia’s importance as an independent force implies that China does not have to challenge the United States in the Middle East to play a larger role vis-à-vis the Arab countries. Moreover, China cannot replace the American presence in the Gulf, especially regarding the unique security posture Washington has in the region. China has thus far been unable (and unwilling) to match the promise of “security for oil,” which has defined U.S.-Saudi relations since 1945.

That appears unlikely to change, never mind the growing might of China’s economic status and popularity in the region. Still, China is certain to continue to shore up its partnerships in the Middle East, even among American allies, as it runs on the momentum gained from the recent trip. For Xi, elevating ties between China and the Arabic-speaking world is part of his country’s “Road to Rejuvenation.” For now, those efforts are moving in a secure direction.