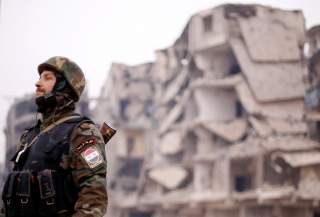 U.S. National Security Advisor John Bolton met with his Russian counterpart, Nikolai Patrushev, last week In Geneva. Among the issues discussed was the U.S. demand that Russia persuade Iran, with whom it has been collaborating in Syria in defense of the Assad regime, to remove its forces from Syria. While Patrushev seems to have agreed with Bolton that this ought to be done, he made it clear that Russia did not have the ability to force Iran to leave Syria.

President Trump’s demand that Iran remove its forces from Syria is not new. In his speech on May 8 announcing American withdrawal from the Iran nuclear deal, President Trump demanded that a renegotiated agreement must include Iran accepting permanent limits on its enrichment program and agreeing to discontinue its missile development program. But he did not stop at that. Trump mentioned that Iran must also stop “its malign behavior in the region” a code phrase for Iran withdrawing from Syria and relinquishing its efforts to increase its influence in the Middle East.

America’s unilateral withdrawal from the nuclear deal and re-imposition of stringent sanctions on Iran that drastically hampers its capacity to participate in the international market, vastly diminishes its ability to sell oil, and chokes off existing and potential foreign investment has not had the desired effect on Tehran so far. The Iranian regime, despite the huge impact reimposed sanctions have had on the Iranian economy and especially on the value of the country’s currency, has not come running to Washington hat in hand pleading for a new deal. In fact the Iranian leadership had firmly ruled out the option of a renegotiated deal well before America’s withdrawal from the agreement.

Similarly, President Trump’s call for Iran giving up its regional ambitions in the Middle East has fallen on deaf ears. The test case for this issue is Iran’s military presence in Syria that, along with Russian military support, has helped President Assad reimpose his control on most of the country. While the United States and its allies inadvertently helped this process by decimating the Islamic State, Iran and Russia were principally responsible for helping Assad to defeat the motley group of rebels challenging his authority.

One should understand that Iranian and Russian interests in Syria are not identical, and Tehran and Moscow are suspicious of each other’s intentions. But, these interests run parallel to each other with both committed to the regime’s survival. However, Iran’s commitment to regime survival is qualitatively different from that of Russia. A couple of years ago, before the military tide turned decisively in favor of the Assad regime, Moscow seemed willing to countenance Bashar al-Assad’s removal in order to forge a settlement between the regime and opposition forces as long as it allowed Russia to retain its influence in the country and especially to continue to use its naval base in Tartus.

Iran’s alliance with the House of Assad, on the other hand, goes back to 1980 when Syria under Hafez al-Assad was the only Arab country that stood by Iran when Saddam Hussein, fearing the demonstration effect of the Iranian revolution on Iraq’s Shia majority, launched a bloody war against Iran that lasted eight years and left a million Iranians dead. Saudi Arabia and the Gulf sheikhdoms, as afraid as Iraq of the impact of the Iranian revolution on their populations, bankrolled Saddam’s war to the tune of twenty billion dollars. The United States, Russia and France also supported the Iraqi dictator against the Ayatollahs—the first by advancing what was euphemistically known as “agricultural credits” and providing battle ground information picked up by satellites to the Iraqi military and the latter two by supplying sophisticated weaponry to Baghdad. One of the reasons Iran has supported the Assad regime since 2011 is that many elite members of the regime saw it as a way of repaying the debt they owed to Bashar’s father.

Of course, there were several realpolitik calculations that determined Iran’s stance once the Assad regime was challenged. These included the support extended by Iran’s nemesis Saudi Arabia and its Gulf allies to insurgent factions as well as the initial American determination to expedite regime change in Damascus. The increasingly Sunni Islamist color of the Syrian insurgency attributed to Saudi support for die-hard anti-Shia Islamist factions also influenced Iranian decisionmaking on Syria.

Now that the Assad regime seems to have regained control of much of Syria, Iran is desirous of reaping the rewards for its assistance to the regime during its worst times. In fact, much of the regime’s successes can be attributed to the military training and advice provided by the Iranian Revolutionary Guard Corps to Assad’s military and the fighting capability of battle-hardened Hezbollah forces from Lebanon again trained by the IRGC. Furthermore, more than one thousand Iranians, including senior members of the elite Revolutionary Guards, have been killed fighting on behalf of the Assad regime since 2012. Iran is keen to profit financially from the reconstruction program that is bound to follow the end of the civil war. More important, it is unwilling to give up its strategic foothold in Syria, which would complement its political presence in Iraq and through its Hezbollah proxy in Lebanon.

This is not so much a strategy for the creation of a “Shia Crescent” in the heart of the Arab world as Tehran’s desire to help stabilize friendly regimes in Iraq, Syria and Lebanon in order to counter Saudi moves to deny Iran entry into the Arab world as part of the Cold War raging between the two principal powers of the Persian Gulf. Therefore, to expect Iran to eliminate or even reduce its presence in Syria is nothing more than a pipe dream. Despite speculations to the contrary, Assad is more than comfortable with the Iranian military presence in the country both because it serves his immediate purpose of regime maintenance and because he does not want to become overly dependent on Russia. Assad is suspicious that Moscow might decide to withdraw its support to the regime, as it seemed to be willing to do in 2016, if it serves its other more pressing interests. In fact, Iran and Syria signed a fresh military cooperation agreement in a meeting on Monday, August 27, between the defense ministers of the two countries in Damascus thus further cementing their defense ties. “The continued presence of Iranian (military) advisers in Syria was part of this military cooperation agreement between Tehran and Damascus,” according to Tehran’s military attache to Damascus, Abolqassem Alinejad.

Under these circumstances American efforts to persuade Russia to induce Iran to leave Syria appear futile. Russia has assured Israel that it will keep Iranian forces at a distance of eighty-five kilometers from the Israeli border because it does not want to get embroiled in a Middle Eastern conflagration (except for in and around Damascus where there is a formidable Iranian presence which Tehran considers non-negotiable), but it is in no position to force Iran to leave Syria or even reduce its military and political presence. This is a fact of life that Washington must learn to live with. It must also factor this element into its future strategy toward Iran. Chasing mirages does not add up to a successful foreign policy.

Mohammed Ayoob is University Distinguished Professor Emeritus of International Relations, Michigan State University, and a senior fellow, Center for Global Policy. His books include The Many Faces of Political Islam (University of Michigan Press, 2008) and, most recently, Will the Middle East Implode (2014) and editor of Assessing the War on Terror (2013).