Will Muslims Break the Ramadan Fast For Coronavirus? 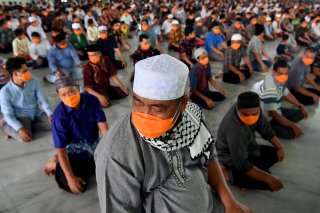 The coronavirus pandemic has put a damper on religious practices around the world, as public health authorities ban large-scale gatherings and close contact to prevent the spread of disease. But the holy month of Ramadan, set to begin next week according to the Islamic lunar calendar, presents another open question to many religious scholars seeking to avoid unnecessary health risks.

Sistani noted that the lack of regular water consumption could increase the risk of becoming ill with the coronavirus in a legal opinion released by his office.

“[I]f they are afraid of contracting the virus should they avoid drinking water at close intervals during the day and they cannot adopt other measures to be safe from infection, [Muslims] do not have to fast,” the ayatollah wrote. “It appears that those who can leave work during the month of Ramadan and stay at home so that they are safe from contracting the virus cannot waive their obligation to fast.”

He added that “it is not permissible to avoid [fasting] except for a real reason, and each person knows about his own condition and whether he has a real reason for not fasting.”

Sistani has a wide following among Shi’a Muslims outside of Iraq as well.

Deputy Health Minister Alireza Raisi said in a Wednesday press conference that the Scientific Committee of the National Coronavirus Headquarters will announce decisions on Ramadan fasting in the next two or three days.

“Some of the things that have been agreed on are that people who tested positive for the coronavirus and have shown symptoms for less than two weeks are not included in fasting,” he said. “People over the age of sixty-five or who have underlying conditions who do not have the possibility of self-isolation are also not included.”

“There are also a number of people with no relationship to the coronavirus for whom fasting causes serious harm. It has also been suggested that fasting is not obligatory for them,” Raisi concluded. “We do not give religious rulings, we only discuss risks and harms, and religious clergy issue legal opinions.”

Authorities in Egypt and Turkey, whose practices are widely influential across the Sunni world, have declared that the pandemic has no effect on fasting obligations for health people, although both have banned communal services to stop the spread of the virus.

Egypt’s state-appointed Grand Mufti Shawki Allam even claimed that fasting actually augments the immune system and helps it to fight the coronavirus.

Al-Azhar University, however, left the door open to a general exemption once more evidence has emerged. Sunni Muslims around the world often look to the Egyptian seminary as an authoritative source of guidance.

“Islam gives the ill permission to break the fast, but medicine has not proven until now any negative effect of fasting on the spread of the coronavirus,” Azhar general-supervisor Dr. Abdulmuna’im Fu’ad told CNN Arabic. “Breaking the Ramadan fast depends on scientific evidence that it affects the spread of the coronavirus, so fast-breaking will be obligatory at that point.”

Fu’ad added that Al-Azhar has been in consultations with the World Health Organization.