Will Rising Anti-China Sentiment in the U.S. Impact Israel’s Growing Ties with Beijing? 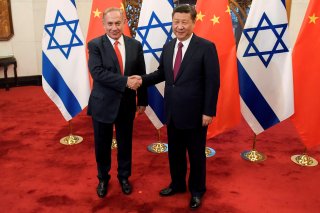 China’s reputation over the country’s misgivings surrounding the coronavirus outbreak has taken a major shellacking in US public opinion, which may come with foreign policy implications. Public opinion, ultimately a major driving force behind American policymaking may empower voices in Washington DC that view the warming relationship between China and Israel with deep concern.

While the level of President Doland Trump’s closeness and commitment to Israel’s security is unquestionable, his administration is aggressively battling to curb and contain China’s ambitions on the world stage. This dichotomy coupled with a public increasingly hostile to China may have deeper implications to Israel’s relationship with the US.

Leading up to the pandemic, US policymakers had already been voicing serious concerns over Israel’s decision to allow the Chinese to play an increasingly expansive role in Israel’s domestic infrastructure projects.

In March 2019, US Secretary of State, Mike Pompeo cautioned Israel about its deepening ties with China.

“Intelligence sharing might have to be reduced, co-location of security facilities might have to be reduced, we want to make sure countries understand this and know the risks,” he said. In June 2019 US Deputy Secretary of Energy Dan Brouillette instructed Israel to establish screening procedures for Chinese investments to avoid interruptions in intelligence sharing between the US and Israel.

In early May 2020, David Schenker, U.S. Assistant Secretary of Affairs for Near Eastern Affairs, warned countries about Chinese government-backed companies that are on the hunt for cheap bargains in Europe and elsewhere to capitalize on the economic malaise caused by the pandemic.

“Some of our partner nations have taken steps to bolster investment-screening efforts of late but Israel could also be well advised to add some of these mechanisms as well.”

These warnings have come at a time when Israel’s relationship with Beijing is at a historic high with ever-deeper collaboration in the fields of technology, business and infrastructure.

The critical voices intensified after Israel gave the management rights of Haifa harbor to the Chinese  for a 25-year period, with work slated to start in 2021. The Haifa port project has been of particular concern to the U.S. Navy, which now needs to decide whether to continue to dock its Sixth Fleet there or to find another port.

The second project raising concerns among American officials is the “Red-Med” project, a 300-kilometer rail line linking the Mediterranenan port city of Ashkelon, just fifteen miles south of Ashdod, to the Red Sea city of Eilat. The Israeli government responded with great enthusiasm to China’s offer to build the railway with a $2-billion investment.

For instance, former Mossad head Efraim Halevy has warned against Chinese involvement in the Red-Med rail project to connect the cities of Eilat and Ashdod, concerned it could trigger a crisis with the U.S. administration.

After Israel decided to lease the port to a Chinese contractor, the US started exerting pressure through various channels out of concern for the Chinese company's proximity to the existing Haifa Port, which is used by the U.S. Sixth Fleet. According to reports, the Trump administration became involved in 2019 and the US Senate was readying to pass a bill that includes a resolution calling on Israel to consider foreign investments in Haifa Port. According to the resolution the US "has an interest in the future forward presence of United States naval vessels at the Port of Haifa in Israel, but has serious security concerns with respect to the leasing arrangements of the Port of Haifa as of the date of the enactment of this Act and should urge the Government of Israel to consider the security implications of foreign investment in Israel.”

Responding to US - and domestic - concerns, Jerusalem announced in October 2019 the establishment of an advisory committee to vet foreign investments to help integrate national security considerations in the process of approving investments in the fields of finance, communications infrastructure, transportation and energy.

According to Schenker, the vetting process isn’t sufficient because it doesn’t cover the field of high technology and is voluntary. “It’s necessary but I think they can do a whole lot better and I think they should”.

Professor Aron Shai, a China expert and Pro-Rector at Tel Aviv University, says that Israel’s political establishment and academic circles are currently in the midst of an intense debate regarding Israel’s China policy.

“There are those who are extremely suspicious and worried and those who are more lenient and accept Chinese involvement in infrastructure projects without deep concerns. There’s great tension between the treasury, who are more lenient towards Chinese investments, and the defence establishment which urges caution regarding the matter. Much of China’s investment activities have gone under the radar and received very little interest from the public.”

“If Israel faces a crisis, or war, the question of China’s influence over Haifa Port becomes all that more important. If China can leverage its influence there, they could potentially block crucial shipments from reaching the port,” Shai added.

Israel’s celebrated hi-tech industry has seen massive growth in Chinese interest and investment. Chinese money is pouring into Israeli tech with $325 million invested in 2018, compared with $308 million in 2017, and $274 million in 2016. In 2018 alone, Chinese investors took part in six out of the 17 largest funding deals in the Israeli venture market.

During the last decade, Israeli exports to China soared by 402%,  Bilateral trade between Israel and China reached approximately $11b.

Israel’s growing ties with China date back to the early 1990s and have historically caused intermittent tension between Israel and the US. In the early 2000s, the US blocked the sale of Phalcon, an Israeli airborne early-warning radar system (AWACS) to China. According to some estimates the entire deal would have been worth S$4 billion.

For three decades now, Israel and China have developed increasingly close strategic economic, military and technological ties. For a small country like Israel, China’s rise and superpower status have not gone unnoticed and the country has worked tirelessly to cultivate warm ties with Beijing. Unsurprisingly, Israel has had to balance between the rivalry between its greatest and oldest ally, the US and a new and growing relationship with China.

Tensions between US and Israel vis-a-vis China rarely rise to the level of public consciousness as was the case with Obama’s Iran policy and the JCPOA, which caused a lasting rift between Prime Minister Benjamin Netanyahu and President Obama.  The Haifa port matter, for instance, did not register in the Israeli public opinion which sees most spats between Israel and the US as harmless, inconsequential family feuds.

While Sino-Israeli ties have skyrocketed in the past decade, President Trump’s focus on China could impact Israel’s ability to play a part in China’s great game of infrastructure chess.

What’s more, the growing public sentiment among Americans against Beijing may have implications on the special relationship between Israel and the US which in turn may force Netanyahu’s newly formed unity government to reevaluate its China strategy.

Cool air from the West

According to a 2015 paper authored by Galia Lavi, Jingjie He, and Oded Eran of the INSS Institute, the Israeli government encourages cooperation with China in a wide range of fields and established a Special Economic Task Force. Former Economy Minister Naftali Bennett set cooperation with China as “top strategic goal” whereby “hundreds of Israeli companies will operate in the Chinese market as soon as possible.

”Israel has the potential to be one stop on the Chinese marine Silk Road connecting the Indian Ocean and the Mediterranean Sea through the Gulf of Suez, provided that the construction of a railway line from Eilat to Ashdod port is approved by the Israeli government. Though Israel seems to be a small and dispensable stop on the OBOR routes, its significance should not be underestimated. Statistics show Israel’s rating in the investment index is 22 out of the 63 countries located along the silk routes, 20 and the operational risk to investment in Israel is considered to be lower than average among countries along the road.”

President Trump’s contentious trade talks which led to an agreement between the US and China coupled with the current pandemic-driven news cycle have taken their toll on how Americans view China.

Already in early March of this year, US public opinion on China hit a 20-year low.

“With the two nations embroiled in a major trade battle, among other issues, Americans are likely to continue to view China unfavourably until tensions subside on some fronts,” wrote Jeffrey Jones, senior editor at Gallup

In a country that holds more elections on federal, state, and local levels than any other country, popular opinion matters. A majority of US citizens are directly impacted by a lockdown that has led to an unprecedented surge in unemployment claims. Many of those suffering have identified China as the main culprit to their malaise.