Will Turkish Voters Chart a New Course in 2023? 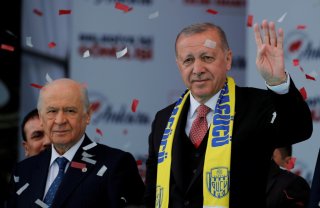 Turkish voters will go to the polls in June 2023 to elect their president and members of the parliament. As cliché as this may sound, the results of these elections will decide the fate of not only President Recep Tayyip Erdogan and his Justice and Development Party (AKP) but also of Turkey’s hammered democracy.

While the economic crisis has become a tenacious challenger to Erdogan’s popularity and the AKP’s rule, the opposition is not competing with the AKP on a level playing field due to the lack of checks and balances, questionable election integrity, and Erdogan’s iron grip over state institutions and freedom of speech. Despite the grand achievement of creating a six-party opposition bloc, a strenuous election process awaits the opposition as it lacks a unified stance and concrete strategies.

Turkey has experienced uncontested regime change, transforming it from a democracy into a competitive authoritarian state where the ruling party controls the institutions and prevents the opposition from gaining power and replacing the incumbent. Erdogan’s dominance over legislation enables him and the AKP to change the rules of the game by amending election laws and enacting new laws on the Internet and social media platforms.

As Erdogan has consolidated extensive power over the security apparatus through massive purges following the 2016 coup attempt, his party has propped up para-police, para-military forces, and vigilante groups to control streets and inflict fear on dissidents.

Erdogan has also undermined judicial independence and transformed the judiciary into a weapon to stifle the opposition and his dissidents. As Human Rights Watch observed,

Executive interference in the judiciary and in prosecutorial decisions are entrenched problems, reflected in the authorities’ systematic practice of detaining, prosecuting, and convicting on bogus and overbroad terrorism and other charges, individuals the Erdoğan government regards as critics or political opponents.

Turkish authorities have used these measures to silence the dissident voices of political opponents, journalists, and ordinary citizens. For example, in 2020 alone, 44,717 citizens were investigated by the police for allegedly insulting the president and denigrating “Turkishness.” Ekrem Imamoglu, a prominent politician, Erdogan rival, and the chair of the Republican People’s Party’s (CHP) Istanbul branch, faces up to five years in prison for “explicitly degrading the Turkish Republic” and “insulting the president.”

During AKP’s twenty-year tenure, state institutions have been transformed and filled with AKP loyalists. This transformation is particularly critical in the elections, as Erdogan has appointed his trusted men to Turkey’s Constitutional Court, the Supreme Board of Elections, the judiciary, and law enforcement which could have a decisive impact on the election outcome in Turkey. For example, under pressure from the AKP, the Supreme Board of Elections decided to count 1.5–2.5 million unstamped ballot papers in the 2017 referendum. Until then, such ballot papers were considered invalid by the board. In one of its most controversial decisions, the board decided to rerun the 2018 Istanbul elections after the AKP candidate Binali Yildirim lost to CHP’s Imamoglu.

Over 90 percent of Turkish media networks are owned by major corporations with close personal ties to Erdogan and depend on state tenders, according to Freedom House‘s 2022 report. Through AKP-controlled media outlets and tens of AKP mouthpieces, Erdogan can influence and manipulate public discourse on critical issues, such as the economy, domestic security, and foreign policy. To circumvent censorship, albeit, in a very limited way, AKP’s opponents have moved to the Internet and social media platforms. Yet, the ruling coalition aims to expand its control over the Internet and social media in a recent bill. On the flip side, the AKP has been operating one of the largest state-backed troll armies since early 2012 to manipulate the public through disinformation campaigns. In our analysis of the archive of Turkish state-backed troll accounts, we found an increasing trend of creating AK-troll accounts during election cycles to dominate the public discourse, discredit political opponents, and set the public agenda.

On the foreign policy front, Erdogan has discovered disruptive diplomacy as a very effective tool, which he could exploit politically always to present himself as the victor in any circumstance. As Steven Cook from the Council of Foreign Relations remarks, “Being disruptive in the alliance is a good political strategy for Turkey’s leader … it is good to be Erdogan: When he wins, he wins, and sometimes when he loses, he still wins.” Erdogan has excelled in using foreign policy achievements to increase his domestic popularity. Turkish military interventions abroad, especially with the effective performance of Bayraktar drones in the Russo-Ukrainian War, the Syrian conflict, and the Armenian-Azerbaijani war in Nagorno-Karabakh, have helped Erdogan elevate his image further.

Today, the economy is Erdogan’s Achilles’ heel as he approaches the 2023 elections. Given the ongoing economic crisis, which has been excruciatingly painful for the Turkish public, Erdogan’s approval rating in the long term depends heavily on whether there would be any significant improvement in the economy. The latest rise in inflation rates and the depreciation of the Turkish lira with increasing energy, food, and housing prices have hurt the poor and the middle class the most. Moreover, the war in Ukraine has jolted Turkey’s already-reeling economy since Ankara has close economic relations with Moscow and Kyiv, especially in energy, agriculture, tourism, and construction.

According to the Turkish Statistical Institute (TUIK), a government institution commissioned to create official statistics, the Consumer Price Index (CPI) increased by 78.2 percent annually. Even though the increase reported by the TUIK is the peak of the last twenty-four years, it is far below the inflation rate announced by ENAGrup, an independent research organization. For ENAGrup, the annual increase in the CPI reached 175.5 percent in June 2022, which is 97.3 percentage points higher than the TUIK’s evaluation. It is no surprise that two-thirds of the Turkish public see the “economic crisis” as Turkey’s top concern that needs to be solved urgently. 63 percent of participants blame the ruling AKP government for the economic downturn, according to METROPOLL’s Turkey’s Pulse April 2022 Survey.

As the public has been facing a deepening crisis, public discontent with big government contracts given to AKP-affiliated businessmen has been growing. These AKP oligarchs have gained social and economic status through nepotism, corruption, and unfair treatment. Such corrupt relations implicating Erdogan’s inner family and close party associates have begun to hurt the AKP.

Public resentment against the refugees from Syria and Afghanistan adds to Erdogan’s challenges in the upcoming elections. As the crisis becomes more protracted, the level of public antipathy toward refugees will only increase. They have become the scapegoat for rising unemployment and worsening economic conditions. As the election approaches, the refugee crisis in Turkey has become increasingly politicized; the opposition and the ruling bloc have been milking the issue. Erdogan acknowledges the refugee crisis but presents it as a moral duty; he tries to garner public support for a military operation in northern Syria to secure a pathway for a “voluntary” return of a million refugees to their home countries. The refugee crisis has paved the way for the emergence of the ultra-nationalist and anti-immigrant Zafer (Victory) Party of Umit Ozdag, with up to 3 percent public support.

Erdogan has failed to secure support from Turkey’s Gen Z population. Turkey’s youth have been vocal on social media and in public spaces to some extent to express their frustration. Despite the AKP’s efforts to raise a generation that serves as a party base, which Erdogan calls a “pious generation,” the percentage of youth who identify as “religious conservative” has dropped. They have grown increasingly disillusioned with AKP’s Islamist policies.

In February 2022, the leaders of the six opposition parties signed a joint declaration that outlined the opposition’s plan to reinstate the parliamentary system and strengthen the separation of powers in Turkey. The “pluralist, participatory and libertarian democracy that will end all kinds of discrimination; freedom of thought, expression, and press; social peace and accountability before impartial/independent judiciary; production and employment-oriented economy; effective and reputable foreign policy.”

The opposition’s biggest challenge is to win public confidence in their ability to solve Turkey’s problems. The joint declaration, meetings, and statements indicate a collaboration among the six-party Nation’s Alliance. Yet, such declarations of mere words will not sway the people who have been fed up with too much rhetoric without substance. For example, polls showed that the proportion of those who think the opposition can solve economic problems is about 50 percent. The confidence in the opposition should have been higher, given the gravity of the economic crisis.