The World Should Back Trump's Strategy on Iran 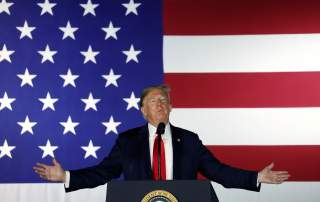 The round of sanctions slapped on Iran in early November—targeting the oil and energy sectors, banks and shipping companies—are the latest step in the pressure campaign that the Trump administration has been mounting on Iran since it came into office in early 2017, and with greater impetus since it left the Joint Comprehensive Plan of Action (JCPOA), known as the Iran nuclear deal, in May 2018.

The goal of the Trump administration is primarily to leverage the pressure of these sanctions to compel the Iranian regime to negotiate a much improved nuclear deal. Secretary of State Mike Pompeo has noted that reimposing the sanctions that were lifted as part of the 2015 nuclear deal is also designed to ensure that the regime has fewer resources with which to continue to support terror and its other aggressive activities throughout the region, in line with its declared hegemonic aspirations.

Cutting off resources is a rather straightforward aim that has a good chance of achieving the desired result. With regard to the expected effectiveness of sanctions as a means of bringing Iran back to the table to renegotiate the nuclear deal, the situation is more complicated. It depends on the regime’s assessment as to whether it can withstand the pressure—at least until a new president is elected in 2020; one that might adopt a more favorable approach toward Iran—or whether it concludes that it cannot do so, and is compelled to make additional nuclear concessions in order to ease the pressure.

When assessing the potential effectiveness of sanctions as a means of getting Iran back to the table, it is important to keep in mind that they are not a perfect tool, and that they have a mixed record as far as compelling states to comply with whatever demands are made of them. But the tools at the disposal of states to try to effect change in other states are limited, and sanctions are the major non-military form of pressure. At the current juncture, imposing harsh pressure on Iran is the best hope that the Trump administration has for turning things around as far as Iran’s nuclear and regional profiles are concerned.

Indeed, empirical evidence shows that in the specific history of dealing with Iran’s nuclear ambitions since 2003, pressure is the only strategy that has led to a positive change in Iran’s decisionmaking in the nuclear realm, namely, one that is in line with the goals of the international community. Inducements—or “carrots”—have always been regarded by the regime as a sign of weakness to be exploited, and never as a good will gesture that should be answered in kind. Various carrots and expressions of diplomatic cooperation have never convinced the regime of the benefits of adopting a similarly cooperative stance toward the international actors trying to alter its behavior. Unfortunately, and despite clear evidence to the contrary, the belief that goodwill will beget goodwill remains a steadfast hope among many—especially in Europe—and they cling to their assessment that cooperative dialogue is the only route to success.

Against all evidence, they continue to hold that pressure will only cause Iran to be more hardline, not recognizing that the hardliners—or basically one hardliner, the supreme leader—have always called the shots. Moreover, they ignore the fact that the biting sanctions of 2012 worked. When the United States and European nations came together to impose the toughest sanctions ever, Iran agreed to come to the table seriously looking for a deal. When sanctions and pressure were not sufficiently strong—as evidenced with the UN Security Council sanctions placed on Iran from 2006-2010, that were always watered down due to Russian and Chinese reservations—Iran was able to withstand the pressure and avoid making any compromises when negotiations took place.

Today there is a dire need to turn things around in the international community's approach toward Iran. First, the JCPOA is a fundamentally and dangerously flawed nuclear deal, and Iran has shown no indication that it has made a strategic u-turn in the nuclear realm. If anything, the nuclear archives lifted from a warehouse in Tehran, and revealed by Israel in late April 2018, indicate that Iran has every intent to keep its military nuclear option in place. The major flaws in the deal regard the fact that it legitimizes Iran’s uranium enrichment program, to the point that it allows research and development work on an entire range of advanced centrifuges; that it does not cover Iran’s missile development, the delivery mechanism of nuclear weapons; that it has grossly inadequate provisions for inspections at non-nuclear facilities, where Iran was advancing its military nuclear program; and that it has an expiration date in the form of its sunset provisions.

Moreover, in direct contradiction to the hopes and expectations of the Obama administration, the JCPOA has not engendered a more moderate stance on the part of the Islamic regime, which has become more aggressive in the pursuit of its regional aspirations across the Middle East.

Still, and despite the noticeable effect that sanctions are already having on Iran’s economy, there are factors that make the job of effectively bringing Iran back to the table more difficult today. In 2013, due to the biting sanctions, the P5+1 were better positioned to achieve a good deal with Iran. At the time, Iran was isolated by the P5+1 and the regime was viewed as uncompromising and dangerous. But achieving a good deal critically depended on how they negotiated. Unfortunately, the P5+1 states seemed not to internalize that they were engaged in a tough bargaining situation with Iran; Iran was determined to secure maximum sanctions relief in return for minimal nuclear concessions. In such a situation, it is essential not to be the party that “blinks first,” or demonstrates a willingness to be forthcoming and make concessions. While the P5+1 believed expressions of goodwill would elicit a similar attitude from the Iranian regime, these acts of cooperation actually signaled to Iran that it was the one that had leverage, and that if it used its leverage wisely, more concessions could be squeezed from the international powers. Thus, it was not for lack of pressure, but rather due to poor negotiating strategy and tactics that the negotiation resulted in a flawed nuclear deal.

In the past few years the situation has deteriorated, and the task of “turning things around” has become that much more difficult. This is due to the advances that Iran has made in the nuclear realm, including in the years since the JCPOA was announced—on the missile front and in the research and development of advanced centrifuges that Iran plans to operate in several years. In addition, and as a consequence of the JCPOA, Iran has become emboldened as it now seems to enjoy the backing of all the parties to the JCPOA with the exception of the United States. This enables Iran to emphasize that on the global scene, it is the United States, not Iran, that is isolated. Russia and China are not following Donald Trump’s lead, and the Europeans are actively trying to undermine the sanctions regime that the Trump administration is putting in place.

All of this places a question mark over the prospects for success. Nevertheless, from among the available options—from doing nothing under the illusion that “the deal is working,” through useless attempts to conduct cooperative diplomacy with Iran and to the more extreme scenario of military action—the economic pressure campaign is the best option, with the best chance of success. It would therefore behoove states that actually place a premium on nuclear nonproliferation to back the Trump administration in its effort, rather than trying to isolate or undermine it. And if the pressure does bring Iran to the table, a good result will critically hinge on effective negotiation strategy and tactics, internalizing important lessons from the failed negotiation that led to the JCPOA.