Yemen Is Bad but It Would Be Worse Without U.S. Involvement 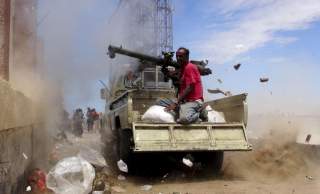 During this week’s visit to the United Arab Emirates, U.S. Secretary of State Mike Pompeo told his hosts than a new nuclear deal with Iran ought to be of “permanent” duration and address the Islamic Republic’s “malign activity” in neighboring states.

Over the past few weeks, several leading congressmen have pushed for an end to U.S. intervention in Yemen, the continuation of which is cited by lawmakers as a clear example of executive overreach. For instance, U.S. congressman Ro Khanna argued in a recent op-ed that America has no business backing a “Saudi-led conflict” that is “deliberately starving millions.” He later tweeted, “Supporting war crimes against civilians [in Yemen] doesn’t make us safer, it simply turns potential allies into enemies.” Similarly, Senator Chris Murphy tweeted that Yemen is “the world’s worst humanitarian disaster caused largely by a U.S. funded nonsensical bombing campaign.”

Congress may have a point to make when it comes to defining and limiting the war-making powers of the executive branch. However, roping Yemen into this just debate obfuscates the origins of the Yemen war, the nature of the country’s humanitarian crisis, and the clear links between this conflict and U.S. credibility and interests.

For example, congressional narratives depict the Saudi-led coalition as the instigators of the Yemen conflict. In fact, the war in Yemen did not begin with Saudi Arabia’s March 2015 military intervention in the country but with the Houthi militias’ violent overthrow of Yemen’s internationally recognized government, which happened in September 2014. Following their takeover of Yemen’s capital, Sana’a, the Houthis, backed by Iran, imposed a fundamentalist, sectarian, brutal, and repressive regime that dashed any hope for political pluralism and democratic governance in the wake of Yemen’s Arab Spring. The government-in-exile then requested external military intervention, and the Saudi-led coalition responded. That Saudis also got involved because they feared that Iranian military and financial support for the Houthis would create a new and deadly proxy force for Iran’s Islamic Revolutionary Guard Corps within the Arabian Peninsula.

There is no question that Yemen is confronting a humanitarian crisis that has been exacerbated by the entry of the Saudi-led coalition into the war. However, much of this crisis has been manufactured by the Houthis themselves. The Houthi government’s total neglect of sanitation services, and its failure to maintain and repair sewer and water infrastructure, has contributed to the deepening of the cholera epidemic. Additionally, the Houthi have confiscated food, medicine, and critical life-saving medical equipment to give to militia members or to sell on the black market at wildly inflated prices. Also, they have widely used landmines and the forced recruitment of child soldiers, many of whom are under fifteen years of age, all of which further compounds Yemen’s humanitarian crisis. In contrast, areas that the Saudi-led coalition have restored to Yemeni government control do not suffer the same disastrous conditions that civilians in Houthi-controlled regions are experiencing.

Furthermore, vital U.S. interests are at stake. The Houthis have repeatedly threatened to disrupt international shipping. Earlier this year, they made good on this promise by firing on a Saudi oil tanker and a Turkish freighter carrying wheat. The Houthi militias are a sworn enemy of the United States and a tool for expanding Tehran’s destabilizing influence throughout the Middle East. The Iranians have supplied ballistic missiles to the Houthis that have been launched against America’s Saudi, Emirati, and Yemeni allies. For the United States to withdraw its support now would be tantamount to conceding Yemen to Iran, which would deal a serious blow to Washington’s regional credibility.

The war against Iran and the Houthis is also linked with the United States’ war on terror, which is supported by Congress, specifically the fight against al-Qaeda in the Arabian Peninsula (AQAP), an organization that is based in Yemen and is widely considered to be the most dangerous of al-Qaeda’s remaining regional affiliates. For example, the Saudi-led coalition helped to build the elite anti-Houthi Southern Security Belt forces. These United Arab Emirates–trained Yemeni units have, alongside Emirati special forces, fought AQAP. Last year, they pushed them out of the Shabwah Governorate, where, six years ago, a U.S. drone successfully targeted one of the al-Qaeda terrorists responsible for the 2000 attack on the USS Cole.

In addition, the U.S. military plays a critical role in safeguarding Yemeni civilians by identifying nonmilitary and civilian facilities for the coalition so that these are not accidentally targeted by air strikes. This intelligence support has not prevented civilian casualties altogether, but it has almost certainly reduced their number. Also, American-produced Patriot missile defense systems have allowed the coalition to intercept dozens of Houthi ballistic missiles fired against Saudi, Emirati, and Yemeni civilian population centers. American involvement also bolsters ties between the U.S. military and the militaries of its Arab allies and these relationships are a key tool of U.S. power and influence if America is to remain globally relevant.

America should continue to support United Nations Special Envoy Martin Griffiths’ in his attempt to broker a lasting political resolution. But the Houthis will have little incentive to negotiate in good faith absent continuing military pressure. Withdrawing U.S. support for the Saudi-led coalition and for Yemen’s internationally recognized government will ease this pressure without doing anything to end Yemen’s war. It also will not help—and may even exacerbate—the country’s humanitarian crisis while dealing a blow to America’s regional prestige and its short and long-term strategic interests. Lawmakers would do well to consider these costs as they seek to reclaim war-making powers from the executive branch.

Fatima Alasrar is the Senior Yemen Analyst at The Arabia Foundation.

Image: A Southern Popular Resistance fighter fires a weapon mounted on a truck during clashes with Houthi fighters in Yemen's southern city of Aden May 3, 2015. Between 40-50 Arab special forces soldiers arrived in Aden on Sunday and deployed alongside local fighters against the Houthi militia, a spokesman for the Southern Popular Resistance said. REUTERS/Stringer TPX IMAGES OF THE DAY