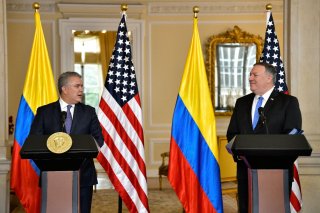 This administration takes Western Hemisphere foreign policy seriously. Witness, Secretary of State Mike Pompeo’s recent four-country trip south of the border. That said, there is so much more that needs to be done.

In this era of great-power competition, the United States must compete globally. If Washington competes the right way, in the right places, America and its friends can win everywhere.

This is certainly true in Latin America. By aggressively pressing for more private-sector economic engagement and cooperation and pursuing constructive public diplomacy, the United States can eclipse Chinese efforts to gain dominance in the region, transforming the Western Hemisphere into an opportunity zone for freedom, peace, and prosperity for all.

Pompeo’s trip was a good example of what needs to be done. While America’s chief diplomat frequently travels to the region, this visit broke new ground. The meetings alone in both Suriname and Guyana were historic; Pompeo is the first U.S. Secretary of State to visit either country. This is statecraft 101. Showing up is half of what it takes to win friends.

Oil and mineral-rich Suriname has tremendous economic potential, but its stifling debt to China and traditionally fraught relationship with the United States impedes its development. Pompeo’s visit on the heels of their recent election indicates an opportunity now exists for mutually beneficial engagement.

In Guyana, Pompeo signed a game-changing energy cooperation agreement with this emerging oil giant. The agreement opens the door to strategic investment by U.S. companies. This could be the start of something truly big: Guyana joining the regional coalition of prosperous, pro-U.S. nations, with the added benefit of energy independence.

For this to happen will require serious and sustained U.S. commitment. China will undoubtedly use its financial and diplomatic heft to court the oil giant.

Meanwhile, to the east, the palpable synergy between Presidents Donald Trump and Jair Bolsonaro is forging one of the most productive relationships in the hemisphere. These are the Western Hemisphere’s two largest economies. Yet critics often fixate on their leaders’ unconventional form of diplomacy while ignoring the enormous strides that have made in under two years. The United States and Brazil went from two decades of pursuing competing objectives, to actively aligning policy agendas. The leader-to-leader relationship is not superficial. Both men share a similar philosophical view about the world and the values necessary to ensure free and open societies. The “personnel is policy” mantra pertains here, as the leader’s shared principles have intensified the speed of cooperation.

Pompeo wrapped up in Colombia, where the crisis in neighboring Venezuela is exacting a heavy toll. Two million Venezuelans have fled that failed state, resettling in Colombia and severely pressuring public resources. Meanwhile, Venezuela’s dictator is protecting narco-traffickers and regional terrorists operating along the two nation’s nearly 1,400-mile long common border. In meeting these challenges, Colombia has found a reliable partner in Trump, whose muscular Venezuela policy has finally put the United States and its dozen-plus regional partners on the offensive.

Throughout South America, the United States is supporting partners, creating new relationships, and having mature conversations with leaders not carrying their own weight. Now, what the administration needs to do is put U.S. policy initiatives on steroids.

That starts with rounding out appointments in key agencies, so there is a full political team on board. Early in the administration, interagency cooperation on Latin America among political appointees was one of the bright spots of the diplomatic corps. Departures have atrophied the team, and there is an urgent need for refreshing.

The United States also needs bolder economic engagement. Forget traditional foreign aid. That’s a loser. But, a plan for aggressive economic commitment where Washington is a catalyst for private sector investment and engagement can’t be implemented fast enough. USAID, DFC, EXIM, Commerce and the State’s Bureau of Economic and Business Affairs should be bombarding the region with initiatives to promote win-win economic deals. Given the election of Mauricio J. Claver-Carone, a former key NSC official, as the U.S.’s first president of the Inter-American Development Bank, more effective and strategic cooperation with the regional development bank would be an added advantage.

America also needs a stronger voice. Voice of America has failed. The State Department’s public diplomacy must shoulder more of the load to explain U.S. policies throughout the region. The United States must work hard to build voices in the hemisphere to offset the pernicious Chinese influence over local media. Organizations like the International Republican Institute ought to be given the resources to work overtime on promoting good governance.

No nation in the Western Hemisphere wants to be a suburb of Beijing. It is time for Washington to make clear that partnership with the United States offers a far more pleasant path—one that leads to freedom and prosperity.