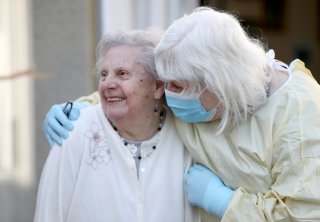 It appears that more Americans who are leaving the workforce are holding off on collecting Social Security benefits because they understand that the longer they wait, they will likely see bigger monthly payouts in the future.

“For better-off Americans, the pandemic economy created some of the strongest incentives to retire in modern history, with generous federal stimulus, incredible market gains, skyrocketing home values and health concerns drawing many Americans into early retirement,” according to The Washington Post.

“The surprising twist? Many of these retirees also opted to put off claiming Social Security benefits,” it continues.

The paper’s data indicate that retirement filings went up 5 percent over the past year—but the number of retirees claiming Social Security benefits went down in the same period. It was the biggest drop seen in almost two decades.

“I just decided I’d had enough, you know?” Fawn Michel, 62, who doesn’t intend to apply for Social Security benefits until she turns seventy, told the newspaper.

“When you have friends and family dying from something like this, I’m thinking, ‘Well, you do this now, or maybe it’s never going to happen,’” she added.

Those who think like Michel will benefit from higher monthly Social Security checks, according to AARP.

“Of course, if you’re ailing and not likely to live many years in retirement, you’re better off taking Social Security benefits early,” according to the AARP website. “But if you’re healthy and have other resources to live off, it pays to wait. Your monthly payment will be 76 percent higher if you wait to start benefits at seventy rather than sixty-two, the earliest possible age.”

“By staying in your job longer or finding part-time work in retirement, you can earn a paycheck that can help you postpone drawing on Social Security benefits early,” the website stated.

An expert from The Motley Fool suggested that seniors—if they are financially able to—should try to wait to file past full retirement age (FRA), which is currently sixty-six and two months (FRA will gradually rise to sixty-seven over the next several years).

“Once you turn seventy, you can no longer accrue the delayed retirement credits that cause your benefits to grow. But if your FRA is sixty-seven and you delay your filing until the age of seventy, you’ll snag a 24 percent boost to your Social Security income that will remain in place throughout your retirement,” she said.