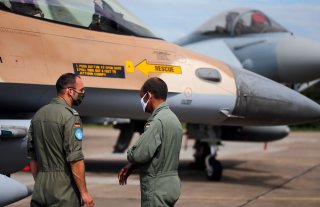 It hasn’t been determined if the sale of the Lockheed Martin F-35 Lightning II Joint Strike Fighter to the United Arab Emirates (UAE) will be approved, but this week another U.S. fighter jet arrived in the Emirates. This week the United States Air (USAF) deployed F-16 Fighting Falcons from the 480th Fighter Squadron, 52nd Fighter Wing, Spangdahlem Air Base in Germany to Al Dhafra Air Base in the UAE.

The aircraft were deployed to enhance the U.S. Air Forces Central Command’s ability to deter aggression and to promote security and stability within the command’s area of responsibility. Deployed as an instrument of Dynamic Force Employment, the detachment of the Air Force's F-16 jets and squadron personnel rapidly integrated into theater air training, and were ready to conduct joint coalition and partner nation missions. The presence of the 480th Fighter Squadron also served to highlight the Air Force's ability to rapidly deploy and employ forces anywhere around the globe at any moment.

“The deployment of the 480th Fighter Squadron demonstrates the U.S. Air Force's agility and CENTCOM’s commitment to allies and partners to bolster security and stability in the region,” said Lt. Gen. Greg Guillot, 9th Air Force (Air Forces Central) commander. “While deployed, the unit will conduct a wide range of missions, including combat operations and training with joint and regional partners, enhance the unit’s overall readiness and return to (U.S. European Command) better prepared to support future operations.”

Such dynamic operations and force employment are conducted to deliver joint force commanders the critical capability to move forces fluidly into and across the theater in order to seize, retain and exploit the initiative against an adversary. The Air Force noted that such deployments also amplify USAFCENT’s agility and strengthen capability resiliency.

CENTCOM’s last dynamic deployment, which also included a detachment of U.S. Air Force F-16s, was from Aviano Air Base, Italy, and occurred in October 2019.

The fourth-generation F-16 fighter has been in continual use since it entered service in 1979. There are approximately three thousand operational F-16 jets in service today in twenty-five countries, a testament to what is easily the world's most successful, combat-proven multi-role jet fighter ever produced. The fast and agile F-16 Fighting Falcon isn’t just one of the top fighters it is also amongst the most cost-effective. As a combat fighter, the Fighting Falcon has proven to be highly maneuverable while its combat radius exceeds that of its potential threats.

It may lack the range and payload of the larger twin-engine F-15 Eagle, the F-16 also costs less than half. While Lockheed delivered the last F-16 jet from Fort Worth to the Iraqi Air Force in November 2017, ending forty years of F-16 production, this old warbird will be taking to the sky for years to come.