The Only Escape from Afghanistan's Cycle of Violence Is to Leave 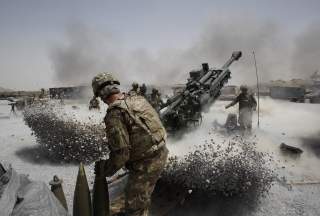 Afghanistan has experienced an especially deadly level of violence in recent weeks, as a suicide bomber killed forty-eight people in an attack in Kabul, and Taliban insurgents killed thirty-nine soldiers and police in attacks on a military base and a police checkpoint in the northern part of the country. On Monday, August 13, Taliban captured or killed another 106 soldiers in an attack on another Afghan military base.

All of this violence comes as Taliban representatives attended talks in Qatar with the State Department. The United States insists that any future negotiations will be between the Taliban and the Afghan government directly. But as the Atlantic’s Krishnadev Calamur writes, talks between the two groups would likely “see heightened fighting as each side jostles for primacy in the talks.”

America is the only thing propping the Afghan government and military up. As the last seventeen years have shown, the United States can’t simply create the right mixture of necessary ingredients—security, economic development, strong institutions—for a stable Afghanistan. That’s not how state-building works. The things serving as roadblocks are endogenous to the country. No amount of continued investment is going to build a government that wouldn’t crumble the moment America left. So, Washington should stop the charade and bring everyone home now.

The current strategy in Afghanistan is “conditions-based,” meaning that the United States will come home when the Afghan government can guarantee its own security. This policy is designed to prevent the conditions that led to 9/11 from re-emerging, as the Taliban gave Al Qaeda safe haven. Let’s assume this is a cogent argument for continued intervention, even though 9/11 was planned from various places around the globe, including Malaysia, Germany, and inside the United States.

The United States has been unable to build a security force that is capable of keeping the peace, even during the early Obama years when there were upwards of one hundred thousand troops present. This is in large part due to endemic corruption present, which also severely hampered reconstruction efforts.

Corruption was not on America’s radar in the immediate aftermath of the 2001 invasion. There “was not sufficient appreciation for the threat corruption posed to the long-term U.S. goal of a peaceful, stable Afghanistan,” according to the Special Inspector for Afghanistan Reconstruction (SIGAR). Even after making it a priority, there was no consistent strategy to respond and anticorruption efforts lacked political commitment and resources.

One reason for the difficulty in fighting corruption is the fact that anti-corruption efforts relied on Afghan elites who benefitted from the systems U.S.-led efforts sought to dismantle. Afghan power brokers can command their own militias and gain loyalty from police, allowing them to terrorize ordinary civilians. This, in turn, created sympathy for the Taliban, who were able to guarantee a modicum of stability in the 1990s.

America’s presence also creates new sources of corruption. Individuals who previously had no influence become strongmen through connections to the United States and the international community. These individuals then use that influence to pursue personal agendas and further undermine reconstruction and security efforts.

These dynamics have not disappeared, either. As the July quarterly report from SIGAR to the U.S. Congress states, “Afghanistan’s law enforcement and judiciary often avoid investigating, prosecuting, and punishing powerful individuals,” while “[u]nqualified and potentially corrupt actors continue to operate in key Afghan anticorruption institutions.”

The Afghan government was only motivated to meet many of its self-imposed benchmarks for anticorruption efforts after reviewing a draft of SIGAR’s quarterly report, which doesn’t instill much confidence in their commitment. Without successfully weeding out corruption, security will further suffer.

Without security, economic development—outside of criminal enterprises such as the highly profitable opium trade—will also fail to materialize. Development requires both the formal and informal institutions that are conducive to growth as these are the institutions that encourage productive activity. Weekly suicide bomb attacks that kill dozens, a failing security force and an unreliable civil service prevent those institutions from forming. These things further alienate regular Afghans from the government, causing a legitimacy problem.

These problems are all endogenous to Afghanistan, and cannot be solved by outside actors. America can prop up a barely functioning Afghan government for years-on-end, but it cannot make it self-sustaining. It’s a catch-22. Corruption prevents progress, and America’s presence creates new sources of corruption. As a result, security and development languish, prompting more investment from America. It’s time to break the cycle and come home.

Jerrod A. Laber is a DC-based writer and journalist, and a contributor for Young Voices. Follow him on Twitter @JerrodALaber.