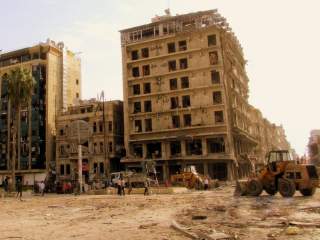 The centenary in 2014 of the outbreak of World War I elicited comparisons between the circumstances of the European crisis that touched off that horrendous conflict and conditions that surround current international conflicts. Many such comparisons focused on how confrontations involving an increasingly assertive China might spin out of control. Graham Allison, for example, wrote of how a possible confrontation in the East China Sea involving Japan could carry such a danger. A rising China throwing its increasing weight around the Far East does indeed offer some of the most plausible scenarios for escalation of local crises into much bigger war. But so does the multifaceted civil war in Syria, as underscored by some of the most recent developments in the northwest of that country.

The prospect of the Syrian conflict remaining unsettled for years and thus providing many opportunities for it to grow into something bigger is the starting point for spinning out escalatory scenarios. But some more specific attributes of that conflict have greater and more disturbing similarities to the 1914 crisis. One is the multiplicity of players, from outside as well as inside Syria and the region, who perceive themselves as having a stake in the conflict. That perception is fuel for possible escalation. Atop a recent article describing the diverse players participating in fighting in Syria's Aleppo province, the Washington Post used a headline about a “mini world war” there.

Related to the perceptions about stakes is the tendency to view the war in Syria as part of a larger conflict between large coalitions. This view amplifies the perceived stakes ever further and also brings into play a sense of obligation to friends and allies. The line-ups relevant to the Syria conflict actually are messier and more complicated than that, but they often have come to be treated as if the line-ups were as well defined as the Entente and the Central Powers at the start of World War I. The outlook involved is readily apparent in the tendency in the United States to see anything that Russia or Iran is doing in Syria as by definition contrary to U.S. interests, whether it actually is or not.

The most disturbing correspondence with the situation in Europe a century ago is the active role played by second-order powers that have become obsessed with the local outcome in Syria, are driven partly by internal political neuroses, and are positioned to drag more deeply into the conflict major powers from which they demand support. This description applies to two second-order powers in particular.

One is Saudi Arabia. Its policies are being made by the latest claimants to leadership in an archaic family-run enterprise that is trying to throw its own regional weight around and feels obliged to assert forcefully the Sunni cause in sectarian conflicts. The overthrow of Bashar Assad has become an idée fixe for the Saudi regime, at the cost of exacerbation of the conflict in Syria and ignoring or exacerbating the problems of Sunni extremism there. Recently the Saudis have talked about upping the external involvement in the conflict even more—with an insistence that the United States lead the way in doing so.

The other player that has become a major problem in Syria is Turkey. A few years ago Turkey looked like more of a solution than a problem in the Middle East. But that has changed. A formerly promising effort to deal constructively with Turkey's perpetual Kurdish issue has died, and the current top Turkish obsession is to oppose the activities of armed Syrian Kurds, although most of what those fighters have been doing in the Syrian war is favorable as far as U.S. interests are concerned. The megalomania and domestic political frustrations of President Recep Tayyip Erdogan have led to greater Turkish risk-taking, as demonstrated by the shooting down of a Russian warplane that had incidentally strayed for only seconds into Turkish airspace. The potential for Turkey dragging the United States into bigger trouble is made all the greater by its status as a party to the North Atlantic Treaty. Prime Minister Ahmet Davutoglu recently stated, “The only thing we expect from our U.S. ally is to support Turkey with no ifs or buts.”

Assassination of the heir to the Austro-Hungarian throne lit the match that led to the great conflagration that was World War I. Terrorism also could play a role in escalation of the Syrian mess, and not only because of the major part that ISIS plays in that mess. Instructive in that regard is a recent bombing against a military convoy in Ankara that killed 28 people. Turkish authorities insist that the Syrian Kurdish militia that has been fighting in northwest Syria was responsible, although that militia strongly denies any involvement and a completely separate Kurdish group in Turkey has claimed responsibility. We on the outside are left to guess, but this affair sounds a lot like the Turkish government manipulating attributions of responsibility to try to support its campaign to oppose the Syrian Kurds.

The Turkish-Russian line of conflict, which underlay multiple Russo-Turkish wars across several centuries, could be at the center of escalation and expansion of the Syrian conflict. If so, there would be shades again of World War I, in which the Russian and Ottoman Empires were on opposite sides.

If the Syrian conflict were to escalate and expand greatly, it would not be because any one player intended that to happen. What happened in 1914 was not intended either. The tragic possibilities would involve lesser steps leading to unforeseen larger results. Nor would catastrophic escalation require us now to foresee and spell out in advance a particular scenario for that happening. Allison wrote in his piece two years ago, “Claims that war is 'inconceivable' are not statements about what is possible in the world, but rather, about what our limited minds can conceive.” Perhaps relevant in this regard is that the leader of one of the major players involved, President Vladimir Putin of Russia, has shown himself to be a better short-term tactician than a long-term strategist.

Taking account of this or any other risk should not be the sole consideration as far as policy decisions are concerned. This is one factor among many. In the case of Syria, this risk is an additional reason among other reasons—including avoiding lesser harms and curtailing the human suffering from the war—to work to deescalate and defuse rather than to escalate and expand. It is a reason to give high priority to efforts to secure cease-fires and to realize that tamping down this still-local war is more important than prosecuting the war to obtain a particular local result.